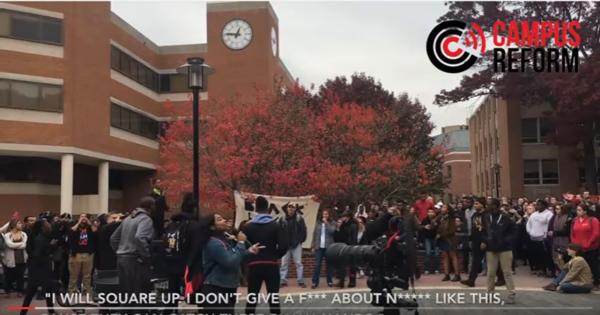 Students and faculty members took leave of their classrooms, offices, and dormitories to meet in Freedom Square, where protesters gathered in a circle and engaged in a diatribe against President-Elect Trump and his supporters.

“It is crucial that we...begin to craft a plan...to mobilize against Trump, and all the hatred he represents.”

The protest was organized by the Social Justice Collective, a faculty-led social justice organization, which called for “faculty, staff, and students to come together to stand against Trump’s hatred, racism, bigotry, homophobia, Islamophobia, and misogyny” in a message circulated on social media.

“It is crucial that we support one another and begin to craft a plan...to mobilize against Trump, and all the hatred he represents,” the message concludes. “Join us as we begin to organize to stave off the impending political, economic, [and] social crisis.” 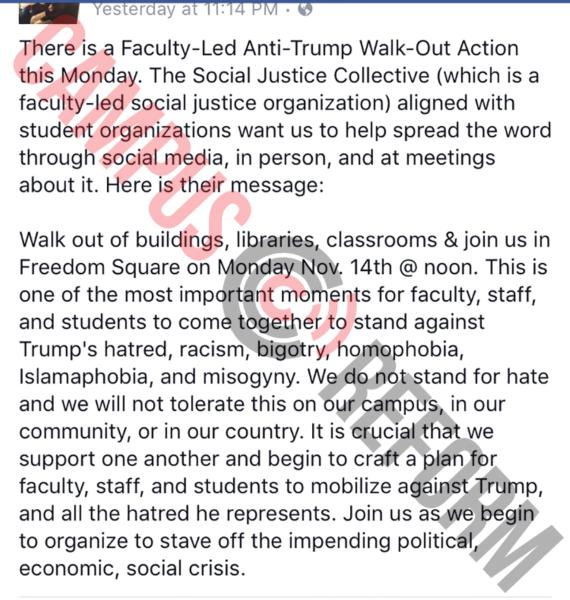 Video captured by Campus Reform during the demonstration captures the intensity of the outrage over Trump’s election at Towson, with profanity-laced tirades against the President-elect dominating the proceedings.

At one point, a lone Trump supporter was even surrounded by protesters while a female student speaker threatened to fight him.

“I will square up, I don’t give a fuck about niggers like this,” the female student yells over a loudspeaker. “They can catch these fucking hands.”

While several other protesters were being restrained from attacking the Trump supporter, the student continued her harangue, screaming, “fuck you, fuck your friends, fuck your family, fuck your existence!”

Other students took the opportunity to express their scorn for white people, saying white people should “feel guilty” for the current state of politics and that the protesters “don’t care about white feelings.”

“Stop antagonizing people and instilling hate,” James told Campus Reform. “Even just like, wearing a t-shirt and going up to people and saying things to them...it’s kinda like wearing a swastika on your shirt.”

“We’re not attacking anyone,” a friend of James’ asserted. “There is coming together.”

Several faculty members joined in on the divisive rally, including Heather Hax, a professor in the sociology department, who told the crowd to talk to their friends and family about racism, which “might be useful for the white folk in the crowd who have to go and talk to their Republican family members during Thanksgiving.”

After the event, students expressed their grief over Trump’s victory, with many telling Campus Reform that they cried when they heard the election results.

“I, that night, cried myself to sleep in my boyfriend’s arms,” one whined. “I had a panic attack the entire day.”