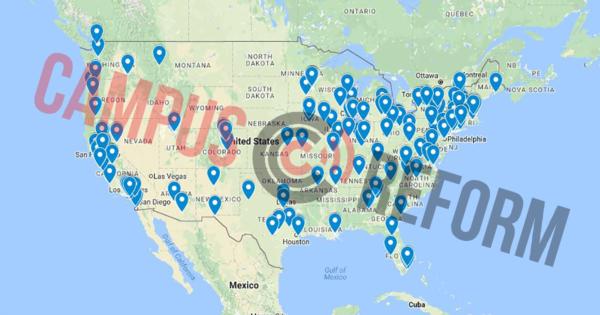 Students at more than one hundred schools plan to participate in a nationwide walkout Wednesday to demand that college administrators offer “sanctuary” for illegal immigrants.

The move, a direct response to Donald Trump’s election to the presidency, comes on the heels of a widespread effort to petition administrators into making their schools into “sanctuary campuses” where illegal immigrant students, and their families, would be afforded immunity from any immigration enforcement agencies.

“We are calling on all students to...commit to putting our bodies between Trump and undocumented students.”

An even larger effort is afoot, however, organized by a protest organization known as the “Cosecha Movement,” which has been urging students to lobby for “sanctuary campuses,” and is even explicitly named as an inspiration in some petitions.

In fact, a document obtained by Campus Reform reveals that Cosecha has provided students with a sample draft with guidelines on writing a petition and which demands to include, citing things such as denying “ICE physical access to all land owned or controlled by the college,” and prohibiting campus security from “enforcing immigration laws.” 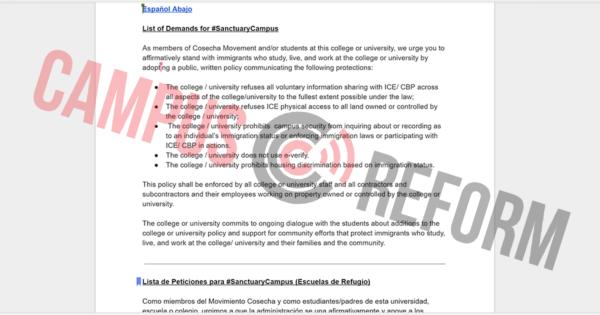 The draft of demands also advises student protesters to demand that their administration cease using the E-Verify program, which the government offers as a way for employers to check whether their employees are legally allowed to work in the United States.

The list of demands drafted by the Cosecha Movement concludes by suggesting that protesters command school administrators to prohibit “housing discrimination based on immigration status.”

To supplement the petitions, the Cosecha Movement has organized a nationwide walkout, schedule for Wednesday at 3:00 p.m., with students at more than 120 schools pledging their participation as this article went to press.

“On November 16, we are calling on all students to join the movement to declare their campuses a #SanctuaryCampus and commit to putting our bodies between Trump and undocumented students,” a Facebook page for the event explains, noting that the group hopes to “create a massive resistance against Donald Trump and to demand permanent protection, dignity, and respect for all immigrants.”

Campus Reform reached out the Cosecha Movement to discuss its involvement in Wednesday’s walkout, but did not receive a response in time for publication.