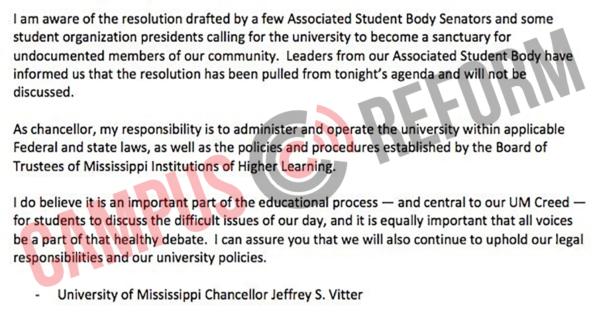 The University of Mississippi student government has postponed voting on a resolution demanding that Ole Miss become a “sanctuary campus” after a draft of the document sparked intense criticism.

The resolution was sponsored by Allen Coon, an ASB Senator who previously sponsored a resolution last year to remove the state flag from campus, and was originally slated for a vote by the full Senate Tuesday evening before being withdrawn from the agenda at the last minute.

“Such silliness is unacceptable...the ASB student government has been co-opted by radical liberal activists.”

The measure was inspired by a faculty-led petition that has been circulating online demanding that the university take several specific steps to shield illegal immigrant students from deportation in light of Donald Trump’s election victory.

[RELATED: Students demand ‘sanctuary campuses’ to protect them from Trump]

“The events following the recent election—which include a rise in anti-immigrant sentiment and behavior—call us to reaffirm these values and formally institute measures that ensure that the rights of all our community members will be protected,” the petition asserts. “Therefore, we...call upon our campus leadership to immediately begin the process of making our campus a formal sanctuary for undocumented immigrants, their families, and related community members.” 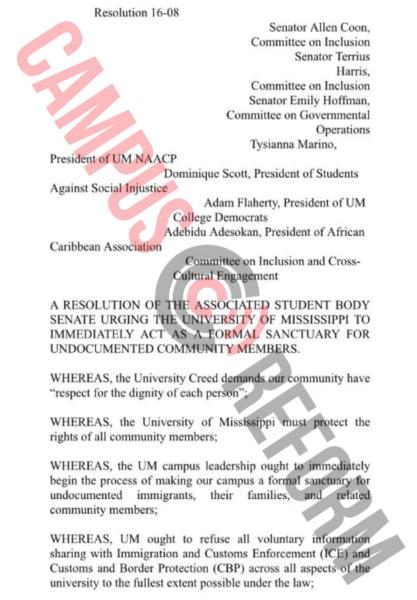 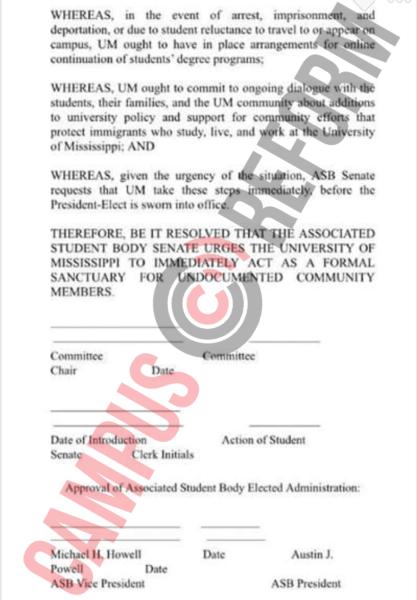 As a draft of the resolution began circulating online, however, many Ole Miss alumni began to speak out against the “sanctuary campus” idea, including Mississippi state senator Chris McDaniel, a 1997 graduate of the University of Mississippi Law school.

“First, it was the state flag. Now the Ole Miss ASB (student government) is proposing a resolution which would make Ole Miss a ‘formal sanctuary for undocumented immigrants’ or put another way, a sanctuary university for illegal aliens,’" McDaniel declared in a Facebook post Tuesday.

“Such silliness is unacceptable, and it has become evident that the ASB student government has been co-opted by radical liberal activists,” he continues, declaring that “if the university administration implements the proposal, then the legislature must take immediate action.” 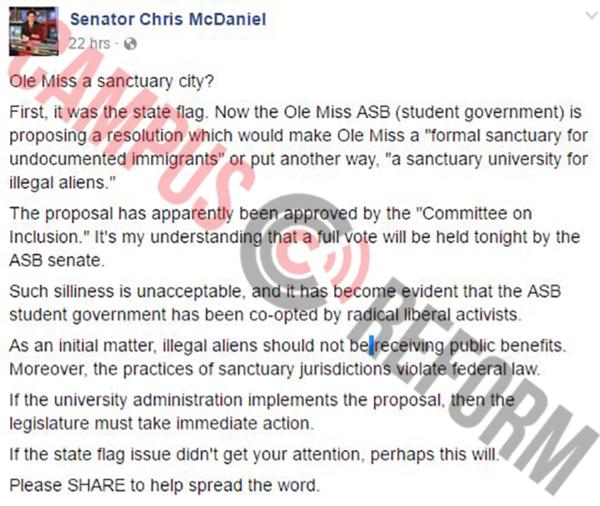 Then, less than two hours before the Senate meeting was set to commence, Ole Miss Chancellor Dr. Jeffrey Vitter released a statement saying that he was aware of the resolution, and subtly indicated gratitude that its withdrawal would spare the administration from being placed in a difficult position.

“As chancellor, my responsibility is to administer and operate the university within applicable Federal and state laws,” he pointed out, suggesting that at least some elements of the resolution would have conflicted with that obligation.

“I do believe it is an important part of the educational process—and central to our UM creed—for students to discuss the difficult issues of our day, and it is equally important that all voices be a part of that healthy debate,” he continued, but concluded that “I can assure you that we will also continue to uphold our legal responsibilities and our university policies.”

About an hour after Chancellor Vitter released his remarks, the ASB released a statement via Twitter claiming that the resolution had been pulled merely for procedural reasons, explaining that it had not been approved by the ASB Senate Committee on Rules before being promulgated online.

“ASB’s executive leadership wants to reinforce the importance of properly following procedures to ensure that in the future, legislation drafts contain correct information and are not released until approved by the ASB Senate Committee on Rules,” the release states, reiterating that “ASB regrets the circulation of incorrect information.” 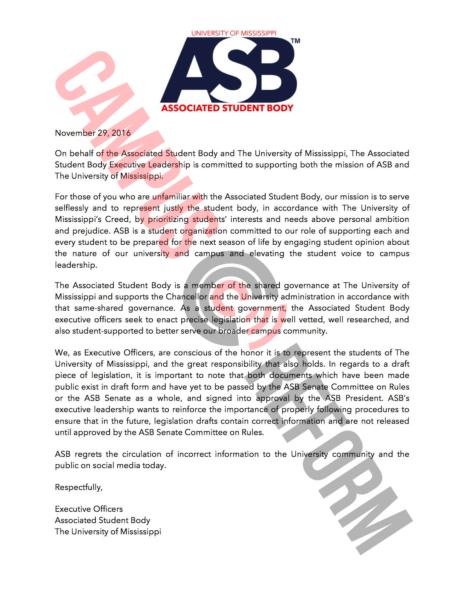 The ASB Executive Council revised the meeting agenda to remove the resolution just twenty-five minutes before the Senate was scheduled to convene, and while Coon admits that he made a mistake by not contacting all relevant departments, he also vows that he will continue to push for Ole Miss to become a sanctuary city, saying he plans to re-introduce the resolution next semester.

In the wake of the resolution’s cancellation, Mississippi Pep reports that two student senators, including a committee chairman, have pulled their support for the resolution, with a third committee considering withdrawing its endorsement, as well.