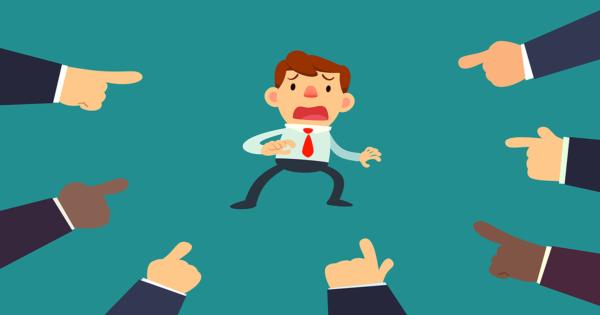 A Binghamton University student representative was forced to resign after joking about “tar and feathering” two candidates for campaign violations, which one of the subjects deemed a “racialized threat.”

Jeremy Rosenberg, a member of the the Student Association (SA) Planning, Research, and Elections committee (PRE), made the joke in a GroupMe message while the committee was deciding how to deal with two candidates for SA Vice President of Academic Affairs who had posted about their campaigns on Facebook earlier than election procedures allow, Pipe Dream reports.

“I see the comment by Jeremy as a death threat.”

“Did you guys make a verdict about them? Like what for Raul [Cepin] and Julia [Townsend]?” asked one member of the committee’s private group chat, to which PRE chair Jesse Wong replied “yes.”

“What are the penalties?” the questioner then asked, at which point Rosenberg jestingly responded “Tar and feathering” before excusing himself with another message saying, “Sorry I’m losing my mind.” 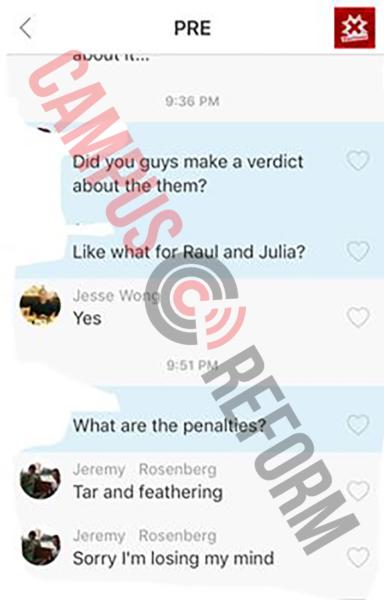 A screenshot of the message was taken by a PRE member, and soon appeared on Cepin’s Facebook page, where he alleged that the comment was a “racialized threat.”

“The historical legacy of the term has placed me in a place of fear and uncertainty regarding my safety on campus…I see the comment by Jeremy as a death threat, which has been affirmed by the silence of the rest of PRE, specifically the chair of the PRE committee Jesse Wong who should have immediately reported it to the authorities and the appropriate channels within the Student Association Inc,” Cepin rants in the November 22 post.

“The history of tar and feathering is a particularly problematic one for African Americans,” he adds, noting that the practice “was an essential part of the institution of slavery and the periods of Lynchings that followed after.”

Just a few hours later, Cepin proceeded to leave another post stripping away what little ambiguity suffused his original screed, implying that he was only targeted by the elections committee because of his race.

“The elections committee accused me (the only black candidate) of breaking a rule that didn't exist,” Cepin asserts, while neglecting to acknowledge that the other candidate being investigated for the same violation was a white woman.

“I believe that the university should fund a Black leadership conference to train current leaders and rising leaders as a sign of good faith,” he concludes, declaring, “this isnt about me[;] this is how people treat Black leadership at Binghamton University.

Over 200 people showed up at a Student Congress meeting Monday evening to protest the “tar and feathering” message, as well as the alleged lack of action by student government executives.

“The SA did not send an email out until they found out [people were coming to the congress meeting], and Nicholas Ferrara…was saying that this comment was not that serious,” Cepin alleged during the meeting, referring to his contention that Ferrara, the SA president, had described the controversy over Rosenberg’s joke as “foolish” during a previous student government meeting.

Wong, however, assured the large audience that Rosenberg had already resigned from the committee, and issued a formal apology on behalf of the entire organization.

“I, the PRE chair, have accepted the resignation [of Rosenberg], and he will no longer be a member of congress or PRE,” Wong said. “I sincerely want to apologize on behalf of PRE for what has been going on. Myself and the current members of PRE do not condone this racism.”

“I’m very, very sorry that this happened, as myself, as Nick, but also on behalf of the Student Association and I want to work diligently to make sure that it doesn’t happen again,” Ferrara concurred, reiterating that “I am going to do everything in my power to make sure something like this doesn’t happen ever again.”

Although Rosenberg’s resignation apparently accrued to Cepin’s benefit—the sanctions against him were dropped in a lopsided 21-1-1 vote—but he nonetheless pressed forward with legislation calling for the “black leadership conference” he had mentioned in his Facebook post, which was passed by a 25-2 vote, with four abstentions.

Campus Reform was unable to reach Rosenberg for comment.