Notre shame: school may break tradition by not inviting Trump 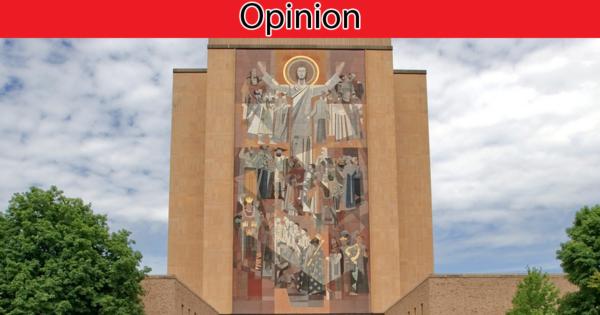 ...is what people used to say, but no longer—and not just because the gender-specific pronoun is now verboten in polite company.

"[Students] are appalled that their president is even considering extending Trump an invitation."

Rather, it is because ND is seriously considering withholding the once-automatic invitation from President-elect Donald Trump, and that equivocation alone represents a notable departure from the long-standing tradition dating back to Dwight Eisenhower.

Fr. John Jenkins, ND’s president, told The Observer earlier this month that he is still contemplating whether to invite Trump, noting that President Obama’s 2009 commencement address “was a bit of a political circus,” and that he is concerned that a Trump commencement “may be even more of a circus.”

A more likely explanation, and one to which Jenkins alluded elsewhere in his remarks, is the sense that “the election reveals deep divides in this nation,” which apparently has not been the case with any of the preceding 11 presidents.

Jenkins’ uncertainty is not sitting well with a large number of students, more than 2,700 of whom have signed a petition demanding that he make up his mind.

The students are not upset over the possibility of being denied the chance to hear the President of the United States speak, however. They are appalled that their president is even considering extending Trump an invitation, shrieking that “the President-elect represents a unique and immediate danger to many students, faculty, staff, and community members here at Notre Dame.”

Indeed, the petition even goes so far as to declare that Trump’s mere “presence” on campus, even if only for a less high-profile speech, “will pose a heightened threat to our peers, and is thus unacceptable.”

Strong as the temptation toward reflexive ridicule may be, it is important to note that the students are not actually afraid that a cartoonish, overweight senior-citizen will beat them up, one by one, as they go up to receive their diplomas.

Nope, nothing so absurd from the enlightened students of ND, who insist that the real threat lies in the prospect that Trump will say unkind things about somebody, somewhere. Or, what could be just as bad, that he will fail to issue a full-throated repudiation of every imaginable instance of prejudice and hatred.

“His hateful rhetoric towards people of color, his embrace of sexual assault, and his utter lack of respect for opposing viewpoints not only render him unfit for the Oval Office, but unfit to set foot on our campus,” the petition asserts, adding, “He has already proven himself unwilling to denounce violence and hatred on behalf of his cause.”

And there you have it: Trump’s “utter lack of respect for opposing viewpoints” renders his viewpoints unworthy of the respect of Notre Dame students.

The ridicule may now begin in earnest.

For those who prefer a more proactive approach, though, there's always this counter-petition, which so far has nearly double the number of signatures as the original.