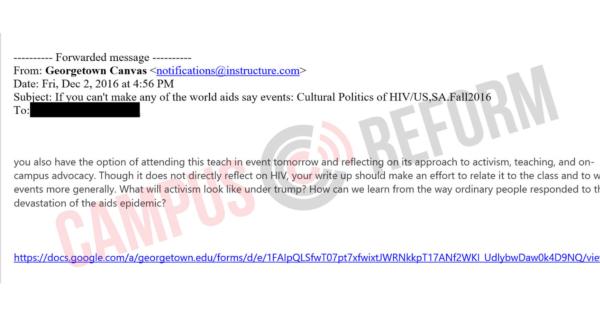 Georgetown students in a course on the AIDs epidemic were given class credit for attending and submitting a reflection on a self-proclaimed “radical teach-in” that discussed ways to “resist hatred and violence” stemming from Donald Trump’s electoral victory.

According to a course syllabus for “The Cultural Politics of HIV in the US and South Africa,” a class in the Women’s and Gender Studies Department, students were required to attend a World AIDs Day event and write a 2-3 page reflection paper on the event they chose to attend. 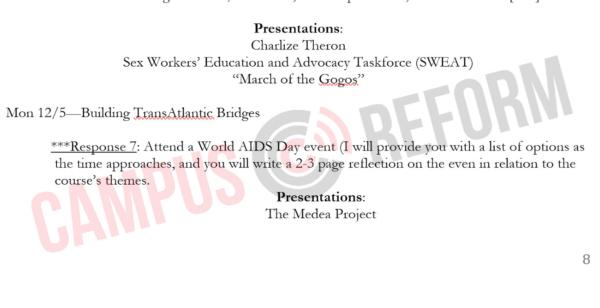 However, in lieu of attending an AIDs-related event, all of which were off-campus and/or required a donation to attend, Professor April Sizemore-Barber offered students the opportunity to attend a teach-in on Georgetown’s campus.

“You also have the option of attending this teach in event tomorrow and reflecting on its approach to activism, teaching, and on-campus advocacy,” Sizemore-Barber wrote in an email to the class, which was obtained by Campus Reform. “Though it does not directly reflect on HIV, your write up should make an effort to relate it to the class and to world events more generally. What will activism look like under trump? [sic]”

A student in the course, who wished to remain anonymous, told Campus Reform he felt obligated to attend the teach-in for his reflection assignment because “the other options, which were related to AIDs/HIV, were not easily accessible and often required paying a fee, which was not realistic since I am a low-income student.”

The teach-in, which took place on December 3, was titled “Teach-In for Radical Hope: Sowing Seeds for Liberation,” and described itself as a workshop to “channel all the anti-Trump rage into a pro-Liberation rhetoric that moves people into action.” 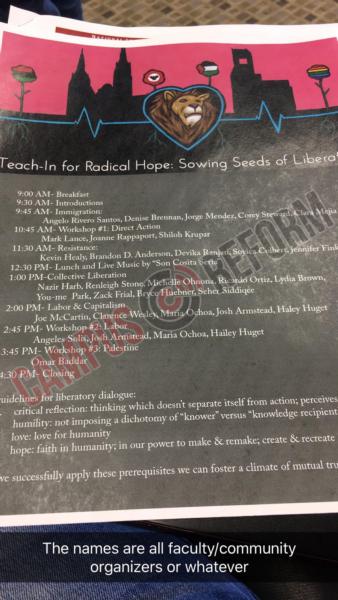 Posters hanging at the teach-in included messages such as “Black Lives Matter” and “No human being is illegal.” 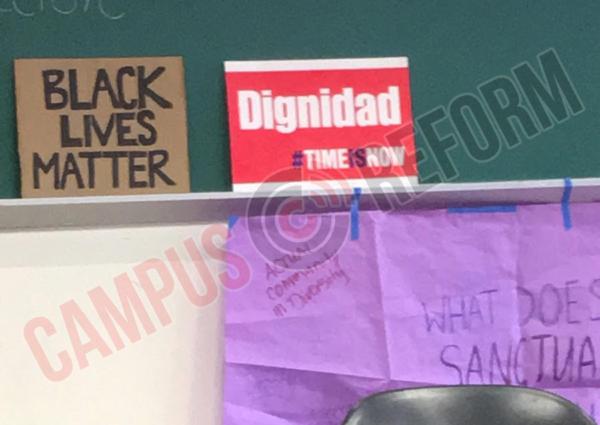 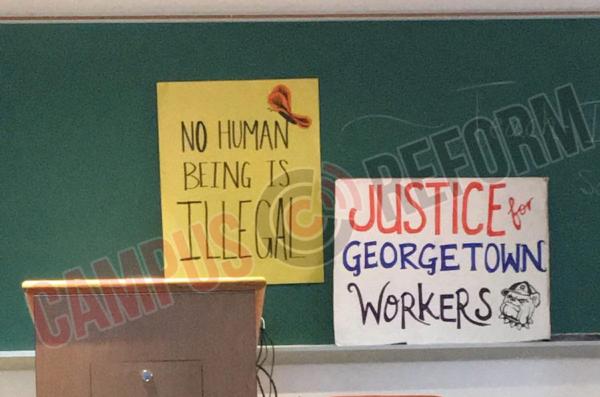 Several hours of audio captured at the event by the student reveals that teach-in attendees spent two sessions discussing what it is, exactly, that they should be resisting and “how to resist.”

One attendee said people should resist Trump and his supporters because they are “normalizing and vocalizing and promoting this hatred and violence.... that’s been happening forever in America.”

Another explained that they cannot work with Trump because “that’s what they tried to do with Hitler.”

“There’s a sentiment like, ‘oh well he’s in the presidency and we have to work together...’ he has literal, literal, white supremacists on his cabinet...That’s what they tried to do with Hitler and it didn’t work...they tried like ‘oh we’ll give him this and we’ll give him that and let him do this’ and then WWII and the Holocaust.”

In order to confront these issues, declared one attendee, “violence may be necessary.”

A facilitator of the discussion responded that he, “I agree wholeheartedly,” but warned the attendee that it takes privilege to be violent because “some people can’t afford to do that illegal shit.”

Other people in the audience suggested shutting down roadways while wearing similar clothing “so it’s harder for law enforcement agencies to know who is doing it,” while another claimed that “self-care is a form of resistance” because even your own friends can deny your experiences.

“Sometimes when I felt overwhelmed and I tried talking about it with friends and they say, like, ‘why are you like letting this person take power over you’ and it’s like, ‘no, no, I don’t think you understand, like, this is my experience,’ so it’s a form of resistance to practice self-care,” they explained.

The anonymous student said he left halfway through the teach-in because he felt “exhausted from the radical rhetoric that demonized anything to the right of Stalin.”

“It had nothing to do with the course outside of a broader look at general activism against an ‘oppressive’ government,” he vented.

The student said in addition to allowing the teach-in to be used for class credit, Sizemore-Barber had devoted actual class time to anti-Trump dialogue, claiming she “essentially let two class periods after the election devolve into ‘mourning America’ and Trump bashing.”

In fact, on November 9, Sizemore-Barber invited the class to an open house with “fellow feminists” to help them process the results of the election.

“... we're having our program's open house this afternoon at 3:30 with pizza and the company of fellow feminists,” she wrote. “If you're interested in learning more about the work we do in Women's and Gender Studies, or simply want to be in the company of many Nasty Women, please consider stopping by.” 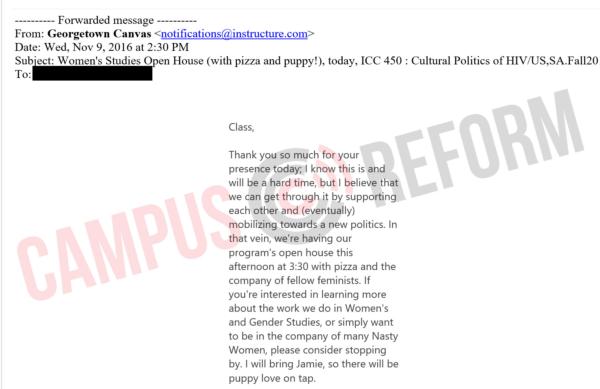 Another email Sizemore-Barber sent to the course on November 23rd describes the post-election period as a “time of turmoil” and includes a link to an Everyday Feminism post that gives tips on dealing with family members at Thanksgiving.

“A number of you have mentioned that you're feeling nervous about being home after this election,” stated Sizemore-Barber. “Everydayfeminism.com has compiled a post-election fact sheet with tips on how to engage with people who disagree with you. I hope this is helpful and that you're able to reach a space of gratitude, even in this time of turmoil.”

“Professor Sizemore-Barber often assumed that the beliefs of the people in the class ran a narrow spectrum,” the anonymous student told Campus Reform. “Professors can be partisan, of course, but it causes issues when they assume all of their students share similar belief systems, even in the Women’s and Gender Studies Department.”

Campus Reform reached out to Sizemore-Barber for comment but did not receive a response in time for publication.