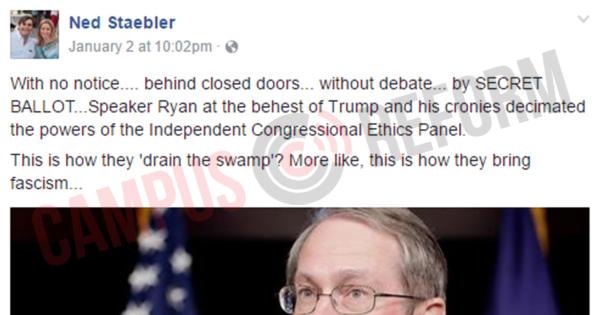 A Wayne State University vice president is on an anti-Trump posting binge on his social media, declaring that Trump is a Nazi and his supporters are comfortable with bigotry.

WSU VP of Economic Development Ned Staebler made a Facebook post Tuesday regarding the House GOP’s potential amendments to the Office of Congressional Ethics, calling it a move to “bring fascism.”

“I’ll say flatly that many of the 63 million Americans who voted for Trump did so BECAUSE of his bigotry.”

When a Facebook friend posted an article describing how the GOP dropped its plans because of a Trump tweet, Staebler asked if the friend was “drawn to Trump by his bigotry” or “just comfortable enough with it to support him anyways.” 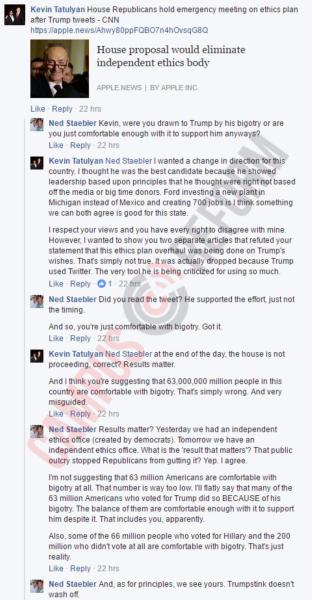 Staebler went even further in his follow-up comments, claiming that all 63 million Trump voters are at least “comfortable” with bigotry, and that many actively support it.

“Trumpstink doesn’t wash off,” he added.

While Tuesday’s post and comments are the most recent example of Staebler’s distaste for Trump and his supporters, he has made similar comments on his Facebook and Twitter before, even using the hashtag #NaziInTheWhiteHouse.

On December 30, Staebler asked another Facebook friend if she was “comfortable with bigotry” after she expressed support for the President-Elect, eventually concluding that she voted for Trump due to “bigotry and insanity,” while another commenter accused her of being a member of the KKK.

“If you support Trump you are OK with bigotry, misogyny, xenophobia AND a foreign power undermining our democracy,” he summed up on December 14. “Own it.”

When Staebler invited his Facebook friends to go “like” his “political page,” one commenter incredulously inquired, “This page is the non-political page?!?”

“.@realDonaldTrump is Time’s man of the year...Again…#MAGA,” Staebler wrote with an accompanying image of Time’s Person of the Year cover featuring Hitler.

Other tweets became borderline vulgar, with one hosting a meme reading, “You’re sick of all my anti-Trump posts? Behold all the fucks that I give,” and another stating that when political opponents go low, “we should go down there and kick their ass.” 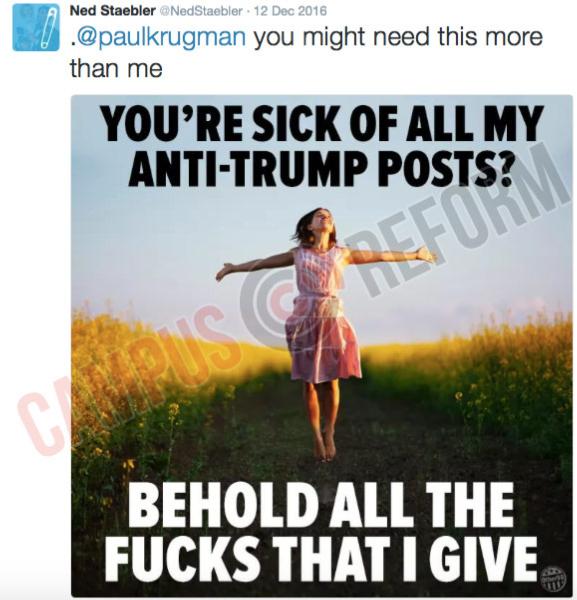 Campus Reform reached out to Staebler for comment but did not receive a response by press time.