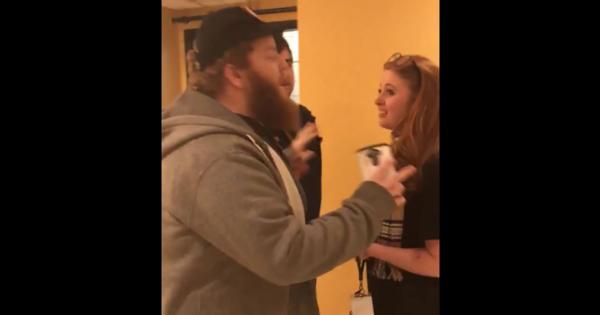 Last week a student at West Virginia University physically assaulted a conservative student after a meeting to plan a debate between the conservative and progressive students went downhill.

The assailant, identified by The College Fix as Kelley Denham, a member of the Left Alliance, assaulted a member of the Turning Point USA chapter and tried to steal their phone while expressing frustration with the conservative students recording the meeting.

“A leftist/communist organization physically assaulted my friends and I for being conservative.”

The first part of the video takes place in the meeting, where Denham instructs the conservative students to leave, after which a second confrontation takes place in the hallway, at which point Denham is seemingly aggressive, yelling and swearing at a female student who responds that “I have a heart problem.”

He then approaches a different student who is filming the situation, strikes the student twice and tries to take the student’s phone while swearing and asking the student why he is filming, to which the student responds, “Because you’re attacking me.”

Kaitlynn Critchfield, a member of the TPUSA chapter, told The College Fix that Denham pushed her into a wall and then attempted to steal her phone.

“A leftist/communist organization physically assaulted my friends and I for being conservative… AFTER we left the meeting peacefully and didn’t go back,” Critchfield said in a Facebook post containing the videos. “We were chased after down the hall by this man then assaulted!”

“You came into our meeting and you’re not allowed,” Denham said to the students.

“Sorry that we wanted to hear another point of view,” one of the TPUSA members responded.

“Campus leftist at WVU ASSAULTS and swears at conservative student because he disagrees with him!” Charlie Kirk, the executive director of TPUSA, said on Twitter. “The left is OUT OF CONTROL!”

According to a WVU spokesperson, though, both sides sides have expressed an interest in allowing the matter to die of its own volition.

“University police has investigated and neither party involved wishes to press charges,” WVU told The Blaze, adding, “West Virginia University continues to stand behind the right of its students, faculty, and staff to express their ideas and points of view, but also remains adamant that it be done in a peaceful, civil, and respectful manner.”