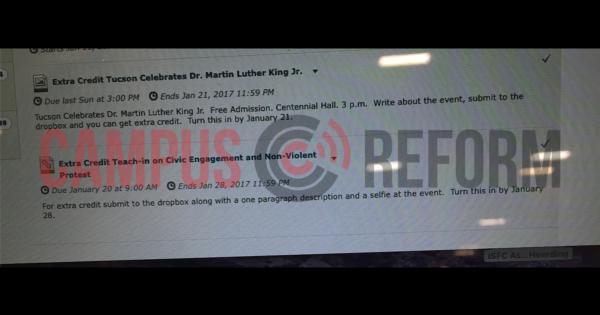 The University of Arizona’s Faculty Senate Chair cajoled professors to participate in an Inauguration Day “teach-in” on illegal immigration, hate speech, fake news, and other topics.

Dr. Lynn Nadel, Chair of the Faculty at UA, announced the event on UA’s faculty governance website in December, inviting faculty members to “repurpose” their classes so that both they and their students could attend the day-long series of events.

“Repurpose your classes on that day so that you and your students may engage in the day’s activities.”

“Here at the UA, several faculty and community members have planned an event on January 20th highlighting nonviolent protest and a commitment to unity and solidarity,” Nadel states. “As Chair of the Faculty Senate, and in keeping with the UA’s 100% Engagement policy, I encourage you to repurpose your classes on that day so that you and your students may engage in the day’s activities.”

Several professors reportedly followed through on the suggestion, including Tani Sanchez, a professor in the Africana Studies Department, who offered students an opportunity to earn extra credit by submitting a one-paragraph description of the event along with a selfie showing them in attendance.

Sanchez did not respond to multiple emails from Campus Reform seeking comment on the extra credit assignment, however.

A separate announcement for the event made its purpose clear, framing it as an explicit rejection of the Trump administration.

“On January 20, 2017, the United States will face a new presidential administration that threatens the rights and safety of many in our community and challenges the tenets of our democracy,” the flyer anxiously states. “While some of us believe it is important to respect the outcome of the election, we also believe it is vital to step up our civic engagement under these circumstances.” 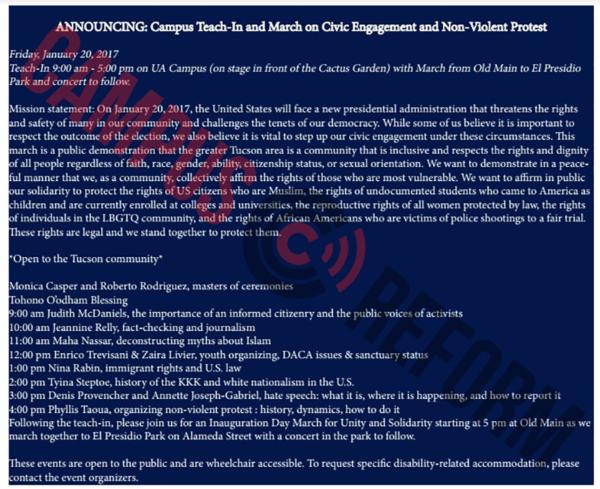 The teach-in was supposed to be followed by a march to El Presidio Park for a concert, but that portion of the proceedings was cancelled due to rain, which organizers announced on the Facebook event page.

The event was organized by Monica Casper, a professor in the Women and Gender Studies Department, and Roberto Rodriguez, a professor in the Mexican American Studies Department, who enlisted colleagues to deliver a series of one-hour lectures on topics like “deconstructing myths about Islam,” “DACA issues & sanctuary status,” and “history of the KKK and white nationalism in USA.”

In addition, the day concluded with two discussion panels, one exploring “hate speech, what it is, where it is happening, and how to report it,” and another giving advice on “how to organize a non-violent protest.”

Although the teach-in was not officially hosted by the university, it was promoted on both the school website and in an email from the university, and there were large tents rented for the event.

Spokespersons for UA did not, however, respond to queries from Campus Reform regarding the amount of money spent on the event.

Shanna Nelson is an Arizona Campus Correspondent, and reports liberal bias and abuse on campus for Campus Reform. She is sophomore at the University of Arizona majoring in PPEL (Philosophy, Politics, Economics, and Law) and German Studies. She was previously a Field Coordinator at McSally for Congress