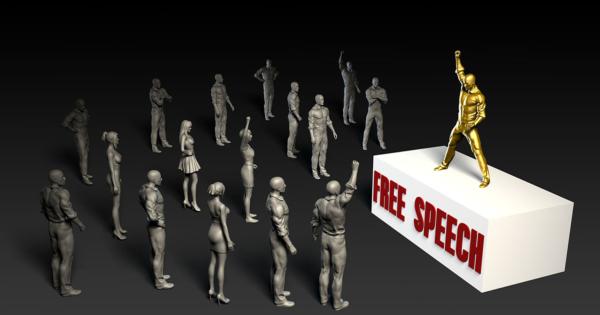 The letter, which was written by professors Michael Costello and Neil McDougall and forwarded to members of the California Faculty Association (CFA), urges President Jeffrey Armstrong to “announce that a talk by Mr. Yiannopoulos does not further the intellectual discussion of diversity and inclusivity.”

“Because CFA is concerned about hate speech on our campus, we have agreed to help...disseminate this letter.”

“We believe that it will show strong leadership to speak out against the the visit by Mr. Yiannopoulos, a man who does not show the intellectual values we cultivate at Cal Poly,” asserts the letter, a copy of which was obtained by Campus Reform. “Allowing the hate speech under the mantle of free speech dishonors our roles as instructors and human beings.” 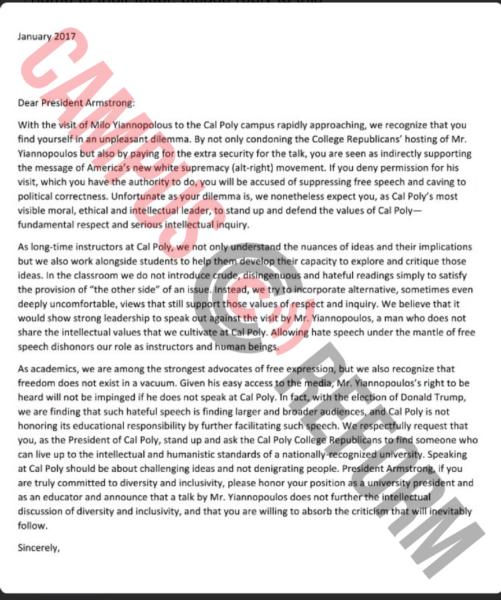 Just last week, however, Armstrong sent a memo to the university community affirming Milo’s right to speak despite Armstrong’s apparent distaste for the commentator’s views.

In the memo, Armstrong declares that “the free exchange of opposing ideals is both encouraged and necessary,” and that it is a responsibility of university to cultivate an environment where where all individuals and their rights are respected regardless of their views, adding that while he personally found flyers promoting the event to be “vile and disgusting,” it is not the university’s job to decide “who should or should not be allowed to speak on campus.”

“A number of fliers were posted on campus bulletin boards that include hateful and divisive language,” he notes, but affirms that “as a public campus that upholds free-speech, we cannot prevent our campus community from being exposed to these messages,” and expresses confidence that “our students, faculty, and staff who are offended by the fliers will recommit themselves to supporting a welcoming and inclusive environment where a variety of perspectives and cultures are embrace, respected, and celebrated.”

“Because CFA is concerned about hate speech on our campus, we have agreed to help these faculty members disseminate this letter to faculty in order to allow interested faculty to add their names to the document,” Archer wrote, noting that the letter was to be delivered on January 27.

Costello and McDougall’s letter acknowledges that Armstrong would likely be “accused of suppressing free speech” if he were to reverse his decision to let Milo speak, but argued that the alternative—being “seen as indirectly supporting the message of America’s new white supremacy (alt-right) movement”—is much worse. 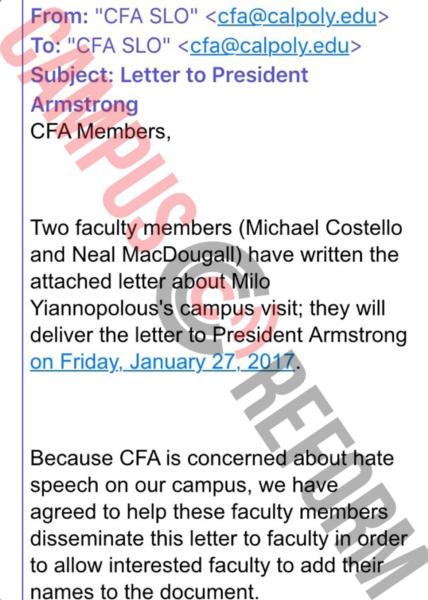 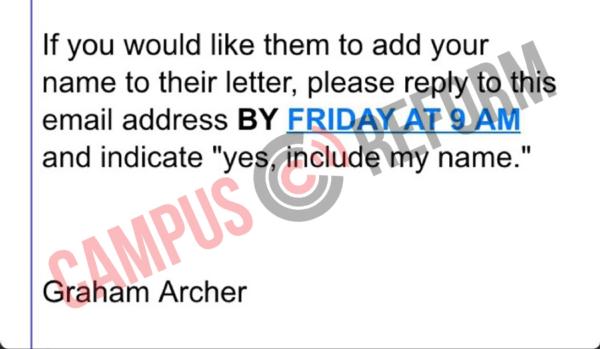 “Speaking at Cal Poly should be about challenging ideas and not denigrating people,” they declare. “President Armstrong, if you are truly committed to diversity and inclusivity, please honor your position as a university president and as an educator and announce that a talk by Mr. Yiannopoulos does not further the intellectual discussion of diversity and inclusivity, and that you are willing to absorb the criticism that will inevitably follow.”

Campus Reform reached out to Costello and McDougall for comment. McDougall has not returned the request, but Costello told Campus Reform that he would “let the letter speak for us.”

As of now, Milo is still scheduled to give his speech on the topic of abortion at 6:00 p.m. (PST), the same time that the Cal Poly College of Liberal Arts is hosting an event called “Unite Cal Poly” with stand up comedian W.Kamau Bell and musician Allen Stone, which organizers describe as “the first annual celebration of diversity and inclusivity.”