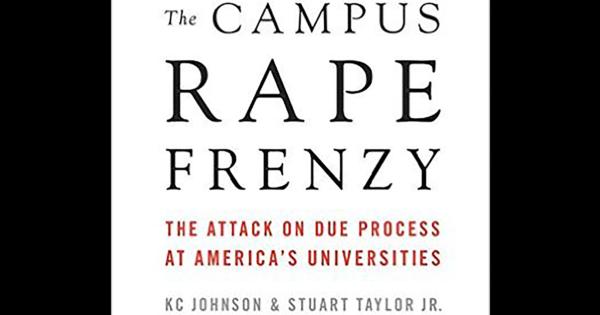 University and government officials have painted America’s college campuses as dangerous for women, and in the process made them dangerous for men, a new book contends.

Indeed, in the recently-released The Campus Rape Frenzy: The Attack on Due Process At America’s Universities, Brooklyn College professor K.C. Johnson and journalist Stuart Taylor Jr. detail the discouraging demise of due process rights on America’s campuses, arguing that efforts to protect women have devolved into justifications for policies that bully and intimidate the accused.

While the book acknowledges that when Title IX first arrived on the scene in 1972 it was “a crowning achievement for gender equity in education,” noting that at no point during the debate “did any member of Congress suggest that Title IX would apply to college disciplinary issues,” the authors reveal that it ultimately came to be abused and grossly misinterpreted some two decades later.

In fact, the book cites the United States Office for Civil Rights’ (OCR) publication of a “Sexual Harassment Guidance” in 1972 as the clear turning point for how college administrators were to interpret and apply Title IX.

At this point, “for the first time,” the OCR not only encouraged the discipline of students for speech that could be considered sexist, but simultaneously “linked Title IX to allegations of student-on-student sexual assault,” sealing for decades to come university involvement in the handling and prosecution of sexual assault cases.

What this means, the authors explain, is that henceforward failure to comply with Title IX could put a school at serious risk of losing federal funding, leaving college administrators staring down the barrel of a financial ultimatum: investigate sexual assault, or jeopardize the bottom line.

Ever since the OCR published its Sexual Harassment Guidance, politicians have used its publication as precedent for similar directives, most notably through the Obama administration’s 2011 Dear Colleague Letter—perhaps not coincidentally released on the day he announced his bid for reelection.

“When you look at the 2011 Dear Colleague Letter cumulatively, there’s really only one thing that’s going on,” Johnson told Campus Reform, asserting that the OCR “wants more people found guilty in these proceedings and they’re going to use Title IX and the threat of rescinded federal funding to accomplish that.”

It seems, perhaps, that the OCR has been granted its wish, with the number of students found guilty of sexual assault rising inexorably as the accused’s rights correspondingly plummet.

Many students are found guilty in what Johnson and Taylor call “campus kangaroo courts,” by which they mean school-run tribunals where the presumption of innocence, the right to cross-examine accusers, and access to legal counsel are often unavailable to defendants.

“There’s something off-putting with the idea that someone loses their rights because they’ve chosen to enroll in a college,” Johnson told Campus Reform, solidifying his case with coauthor Taylor in their new book, where they chronicle the stories of more than 40 male students who were subjected to campus court proceedings.

In just one example, that being the case of Peter Yu, the accused had participated in a consensual hookup with a classmate, Judy Slaughter, after a night of drinking, with Slaughter even texting Yu the following morning that she “had a wonderful time.”

A few short months later, though, Slaughter began to shows signs of guilt, texting Yu an apology “for that night two months [ago]” where she “did not treat [him] very well,” but later filed a complaint against Yu 364 days after the fact, the last day she was eligible to do so, alleging that she could not consent because she was intoxicated.

Accordingly, the school launched an investigation, not allowing Yu to acquire a lawyer, neglecting to speak with witnesses who could attest to Slaughter’s intoxication levels the night of the encounter, and dismissing the text exchange that occurred the morning after.

After interviewing some 40 other students with testimonies similar to that of Yu’s, Taylor recalled the “heartbreaking stories of lasting trauma, suicidal thoughts, suicide attempts, and ruined lives.”

Indeed, Johnson and Taylor assert that Yu’s case is just one of hundreds, if not thousands, demonstrating Title IX’s ugly grip on higher education, a system so empty of due process rights that it has ruined the lives of countless young, and often innocent, men.