'Black-on-black murder is not a thing,' Regis presenter claims 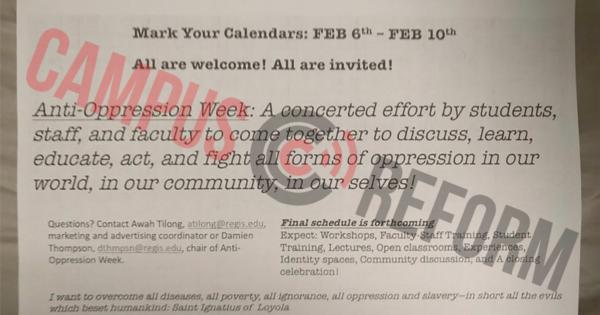 A professor lectured white students and faculty on how they are “complicit” in racial oppression Tuesday during “Anti-Oppression Week” at Regis University.

The session, titled “White Guilt, White Feelings, and the Struggle for Liberation,” was designed to teach attendees “How to ignore your feelings and use your power to be anti-prejudiced!”

The lecture was offered as part of the week-long Anti-Oppression Schedule at Regis, which addressed topics such as microaggressions, “the oppressive power of language,” and “allyship” with the LGBTQ community.

Jack Flotte, a member of Regis University’s Social Justice and Spirituality Committee, opened the session by scolding his white peers and professors on their state of “white fragility,” saying, “Like it or not, we are already accomplices. The question becomes: to what end are we partners in the crime of continuing to perpetuate these systems that dehumanize and oppress people, or are we partners in creating something new?”

Flotte also advised white students and faculty to “spend less time being being upset about accusations that you’re complicit and that white people are bad and spend more time being mad at the racism and suffering,” adding, “Stop changing the subject when race does come into a conversation. Not that you understand this concept of white fragility. You’re going to be made uncomfortable as white folks when the conversation of race comes up. But, just get over it and then channel that energy. Channel that guilt into activism.”

More broadly, he told the audience to “research everything” and “don’t ask a person of color to provide you with an answer all the time.”

Following Flotte’s opening statements, Professor Brian Drwecki asked attendees to give examples of racism that they see on campus at Regis, eliciting a discussion of whether “black English” is a legitimate dialect, or simply non-standard English.

“In America, black English is a dialect,” a female student declared in response to Drwecki’s prompt. “A professor inviting and accepting that, where we might be tempted to say, ‘Well, that’s not correct,’ or ‘That’s not standard English,’ but instead, allowing it. Not just allowing it but questioning the whole idea of ‘standard English.’”

In response to another student’s comment that “most of the people on administration or power are white or white appearing”, Drwecki issued a challenge to the school’s faculty, telling them not to “remain complicit,” but instead to demand more money from the administration.

“What could we do, faculty in the room? What could we possibly do about that? Just faculty and staff remain complicit?” he asked. “We’re probably gonna need money. We’re gonna’ need to ask the administration for money to hire faculty of color to bring into the university.”

Professor Damien Thompson, Associate Professor in the Anthropology department, met with faculty members Monday in preparation for “Anti-Oppression Week,” encouraging them to “go to as many events as possible” centered around race, white privilege, oppression, police violence, oppressive political structures, gender, sexuality, and sexist oppression in order to “raise the vibrations of the conversation,” remarking that “I’m going to go to like 98 percent of them.”

Faculty attendance does not appear to have been mandatory in general, but the event schedule does state that “faculty, administration, and staff who have not attended one of Thursday's faculty anti-oppression training sessions, should attend the anti-oppression training that begins at 9:00am” if they wished to participate in a “Call to Action” rally Friday morning. 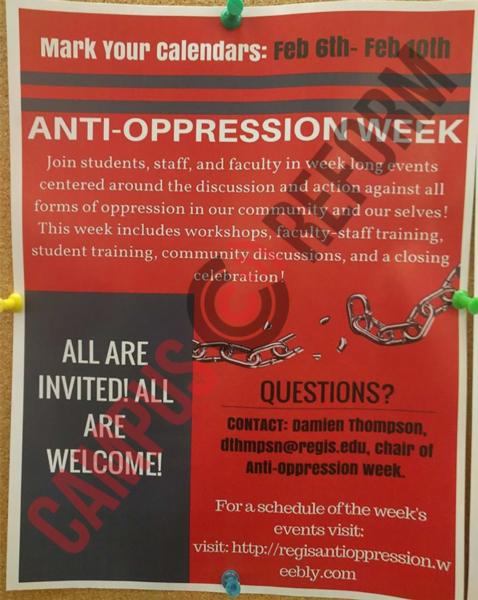 “We have to liberate ourselves in order to find out what a liberated society looks like,” Thompson told colleagues. “Sometimes we just get so focused on ‘Oh I’ve gotta get this student registered for this’ but none of that stuff is even important.”

Thompson emphasized to faculty members the need to be aware of the struggles that students at their private university face, encouraging them to “use a little less head and a little more heart; a little more soul,” and to understand that sometimes activism is more important to students than academics.

“There’s not enough spirit work, at least in the realm that I think of the spirit. Don’t just fall into traditional habits of mind,” he explained. “Students have to face the hard decision of, ‘Do I write a paper or do I go to a march?’ That’s not an easy decision for a 20-year-old.”

One of the scheduled events that took place Monday, titled “People Of Color Identity,” was described by assistant professor Geoffrey Bateman as a “space only for people of color.”

Many of the events held as part of Anti-Oppression Week focused on oppression coming from whites and males, addressing topics such as “The Struggle to End Sexist Oppression,” the origin and purpose of “affinity groups” at Regis, “Microaggressions: What are they, why do they hurt, and how to respond,” and “the gendered language debate.”

Correction: An earlier version of this article incorrectly attributed a quotation to a Regis University professor. The article has been corrected to reflect that the statement was made by a member of the school's Social Justice and Spirituality Committee.