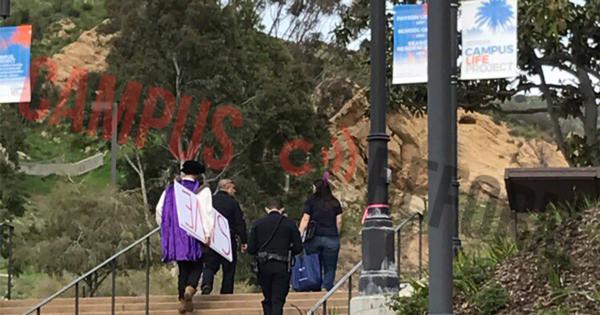 Pepperdine University recently caved to student demands that it remove a statue of Christopher Columbus from campus, and foiled an effort to replace it with a living stand-in Thursday.

“For years the story of Columbus and the fascinating exploration that brought him to the new world was taught in schools across America. It was heroic and exciting,” Pepperdine President Andrew K. Benton stated in a letter to students on January 30. “Later, as the impact of the arrival of explorers was assessed more fully, especially as those impacts related to indigenous people, a different view formed. Today, for many, including those within our campus community, stories of conquest and the art associated therewith are painful reminders of loss and human tragedy.”

“We are disheartened that the president caved to a small group of left-wing agitators and removed Columbus.”

Benton claims that this matter is a “significant local concern,” noting that the statue was donated by a group of local citizens in 1992.

“Those who offered the gift of the statue depicting Christopher Columbus meant to honor the good attributes of his life,” he explained. “They did not mean to offend I am sure, for I know many of those good men and women who supported us then, in 1992, and who still support us today.”

Nonetheless, Benton informed students that he had decided, “after careful reflection,” to relocate the statue to Pepperdine’s sister campus in Florence, Italy.

To protest the statue’s removal, a member of Prager University’s student ambassador program dressed up in a Columbus costume Thursday and stood in the spot where the statue was removed. 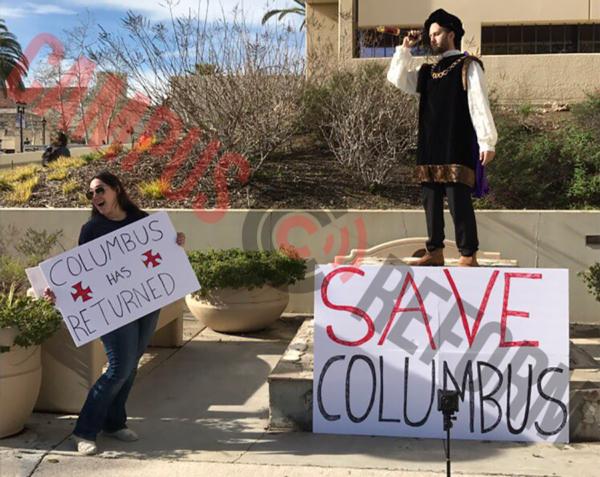 The demonstration eventually drew the notice of school officials, who instructed the activists to leave and escorted them off campus to ensure their compliance, as can be seen in a photo tweeted out by The Pepperdine Graphic alongside the caption, “UPDATE: DPS is escorting the PragerU representatives, who were protesting the removal of the Columbus statue, off campus.”

“We are disheartened that the president caved to a small group of left-wing agitators and removed Columbus, who, despite his flaws, is a symbol for the celebration of Western civilization,” PragerU Communications Director Jared Sichel told Campus Reform, but made clear that “when campus security politely asked that our representatives leave, they immediately did so without incident.”