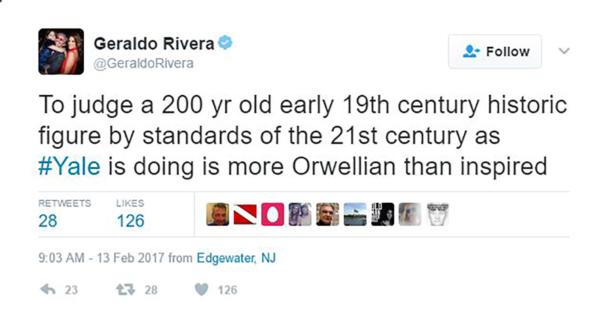 Fox News contributor Geraldo Rivera is resigning his position at Yale University because the school chose to rename a residential college because of its ties to slavery.

According to the Daily Mail, Rivera announced in a tweet Sunday that he would leave his voluntary position as an associate fellow of Calhoun College, which was named after Yale alum and former Vice President of the United States John C. Calhoun, an ardent supporter of slavery.

“Been an honor but intolerant insistence on political correctness is lame.”

“Resigned yesterday as Associate Fellow of #CalhounCollege at #Yale,” Rivera wrote. “Been an honor but intolerant insistence on political correctness is lame.”

The debate over the renaming of Calhoun College has raged for years, but has attracted renewed interest in recent months, prompting the university to abolish the title of “master” for the heads of its residential colleges, rename Calhoun Dining Hall, and remove stained glass windows depicting slavery, though it had initially resisted renaming the college itself.

Yale President Peter Salovey has expressed regrets over not renaming Calhoun College, however, and the school announced on Saturday that it would be changing the name to honor Grace Murray Hopper, a Yale alumna and pioneer of computer programming language.

Salovey declared that Calhoun’s insistence on slavery and white supremacy were inconsistent with the values of the university.

“The decision to change a college’s name is not one we take lightly, but John C. Calhoun’s legacy as a white supremacist and a national leader who passionately promoted slavery as a ‘positive good’ fundamentally conflicts with Yale’s mission and values,” Salovey said. “I have asked Jonathan Holloway, dean of Yale College, and Julia Adams, the head of Calhoun College, to determine when this change best can be put into effect.”

Head of Hopper (formerly Calhoun) College Julia Adams said she regretted Rivera’s decision to resign, but insisted that the decision to rename Calhoun was not based on political correctness.

“I regret the resignation, as I told Mr. Rivera, but do not agree that ‘political correctness’ rather than principled decision-making was at issue,” Adams told The Yale Daily News. “However, I appreciate Mr. Rivera’s acknowledgment of the honor.”

However, Rivera continues to express his distaste for the renaming of Calhoun, asking in a tweet on Monday if Yale students would petition to change the name of the nation’s capital, as “#Washington was a slave owner” as well.

“To judge a 200 yr old early 19th century historic figure by standards of the 21st century as #Yale is doing is more Orwellian than inspired,” Rivera asserted in a follow-up tweet.