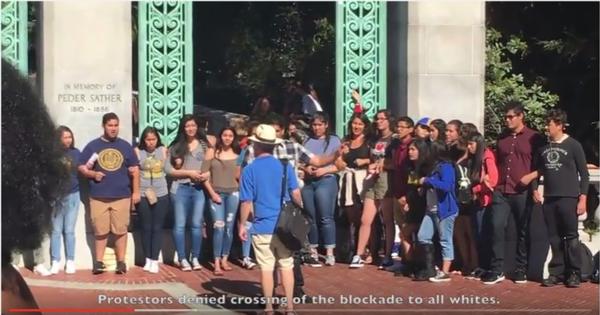 The study, Extreme Protest Tactics Reduce Popular Support For Social Movements, was published in SSRN by Professor Matthew Feinberg of the University of Toronto, who told Campus Reform that he was inspired to investigate protest tactics during his tenure as a graduate student at the University of California, Berkeley, during which time he claimed that he “went to a lot of protests.”

“Extreme protest behavior decreases support for the activists, their movement, and their cause.”

Feinberg said that he and his former graduate advisor at UC Berkeley, Professor Robb Willer, “were wondering which tactics would be more successful than others and which tactics could be backfiring,” and began researching the issue, eventually adding Chloe Kovacheff, a Ph.D student at the University of Toronto, to their team.

Unsurprisingly, he found that the more extreme the protest tactic was, such as rioting or blocking traffic, the less likely people were to support the cause.

“What we found is that exposure to extreme protest behaviour decreases support for the activists, their movement, and their cause,” Feinberg told Campus Reform. “It is counterproductive if one of your goals is to effect public opinion and to gain support from the general population.”

The fact that protests have the potential to be counterproductive was demonstrated further in another of their experiments examining protests that have taken place against Donald Trump.

“What we found most startling was in the anti-Trump protests. When participants were exposed to the traffic blocking video—the participants regardless of their political ideology—showed an increase in support when presented with that video,” Feinberg told Campus Reform.

The potential for protests to be counterproductive has important implications for campus activists, he explained, saying, “There is a tradeoff between two of the key aims [in activism]: one is to get attention, and the other is to effect public opinion in favor of your movement.”

Remarking on the contentious and violent “anti-fascist” protest that recently shut down a Milo Yiannopoulos speech at Berkeley, Feinberg remarked that “Setting things on fire… we’ll count those as extreme protest behaviours.”

[RELATED: Only one arrest, at most, made at Berkeley riot]

Based on the team’s findings, then, it is possible that the Berkeley riot, despite accomplishing its primary goal of preventing free speech on campus, may ultimately prove not just ineffective, but counterproductive.

Feinberg, though, stressed that the goal of his research was not to be negative towards activists and activism in any way, but rather to highlight the pitfalls of excessive zealotry.

“We are not taking a political stance,” he asserted. “We recognize that activism is an important part of the democratic process. We just want to highlight the tradeoffs that exist.”