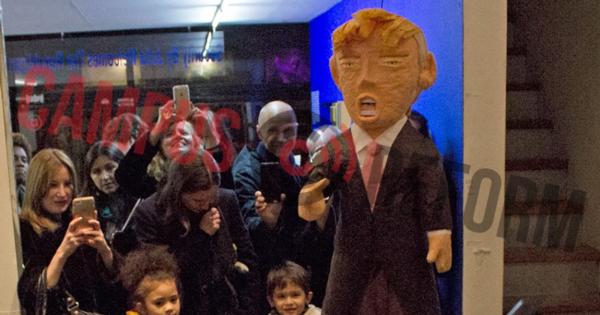 Video footage of the festivities obtained by the East Orlando Post shows students screaming violent profanities and encouraging elementary- and middle school-aged children to join them.

“Events like these add negatively to the already tense political climate in our country.”

“Punch his ass!” one student screams while another takes a swing at the pinata, eliciting cheers from the crowd with every impact.

At one point, following a number of fruitless efforts to attract participants, a small group of minors walks by the event, and members of the Knights for Socialism blindfold one child. Just before he swings at the pinata, though, a chaperone realizes what is going on and demands that the child take the blindfold off and not participate.

Later, a larger group of school children approaches, surrounding the pinata and cheering while one child asks, “Can I hit Donald Trump?”

Knights for Socialism President Dylan Tyler claims that his organization is not negative and is completely welcoming, telling Knight News that “There’s been no negativity by any means but definitely a lot of interest and a lot of good conversations with people.”

In the video, however, Tyler can be heard yelling, “Come beat Pete Sessions' face in!”

The UCF College Republicans aren't thrilled about the Knights for Socialism’s radical behavior.

“Bashing a piñata of our president is an unnecessarily violent act as it was meant to provoke people and spark conflict,” CR member Jarrett Cathcart told Campus Reform. “Events like these add negatively to the already tense political climate in our country and on our campuses. What happened to, ‘When they go low, we go high?’”

The video footage also shows a bearded man wearing an “Antifa International” sweatshirt. The Antifa movement, an abbreviation for “anti-fascist,” has been responsible for many of the recent violent rioting, both at Trump rallies and on college campuses like the University of California, Berkeley, which was recently forced to cancel a Milo Yiannopoulos speech because violent rioters had seized the campus to protest “hate speech” while breaking windows and shooting fireworks at police officers.

According to the East Orlando Post, a local news station recently reported that several parents had emailed UCF threatening to withdraw their children from the university if the Knights for Socialism group is not banned.

UCF officials, however, say the group is not an officially sanctioned student group and therefore has no formal relation to the university.

The “Whack-a-Trump” event comes just days after the Knights for Socialism held its controversial “Leftist Fight Club” training students (“EXCEPT REPUBLICANS”) to “BASH THE FASH.”