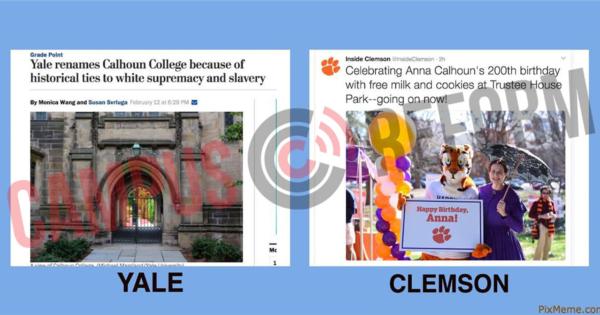 Inspired in part by Yale University’s decision to rename Calhoun College, activists are redoubling their efforts to convince Clemson University to re-designate a building named after an avowed racist.

“Our history is inextricably linked to its founders who lived in the south during the time of slavery and its immediate aftermath."

Clemson’s Faculty Senate issued a formal request to rename Tillman Hall in February 2015, according to The Greenville News, but the Board of Trustees rejected the demand, arguing that removing Tillman’s name would be a historical disservice to the university.

“Every institution is built by imperfect craftsmen. Stone by stone they add to the foundation,” the Board explained in a statement. “Some of our historical stones are rough and even unpleasant to look at. But they are ours and denying them as part of our history does not make them any less so.”

Apparently displeased by the Board’s demurral, unknown vandals covered Tillman Hall with graffiti several months later, adorning the walls with phrases like “Tillman was a violent racist” and “Blacks must remain subordinate or be exterminated-Tillman.”

Following Yale’s recent decision to rename Calhoun College in response to complaints that Calhoun’s extreme pro-slavery position “fundamentally conflicts with Yale’s mission and values,” there is now a renewed push for Clemson to do the same with Tillman Hall.

Anti-Tillman activists were further incensed by a celebration Clemson held Tuesday marking the 200th birthday of Anna Clemson, who was the wife of the school’s namesake as well as the daughter of John Calhoun.

During the party, a historical reenactor portraying Anna Calhoun Clemson posed with the university mascot, the Clemson Tiger, and students were given milk and cookies and the opportunity to take pictures with the founders.

A picture juxtaposing Yale and Clemson’s opposing actions subsequently made the rounds on social media, and professor Chenjerai Kumanyika, the organizer of a recent hunger strike protesting Trump’s executive order, tweeted that “I will not be having cookies and milk today.”

Several other professors and students also expressed their displeasure on Twitter, including Mike Sears, a professor who was recently compelled to apologize for verbally assaulting pro-Trump students during a demonstration on campus.

“So, Yale strips a building of Calhoun’s name. #Clemson serves milk and cookies to celebrate. Can’t make this up. Geez,” Sears tweeted. 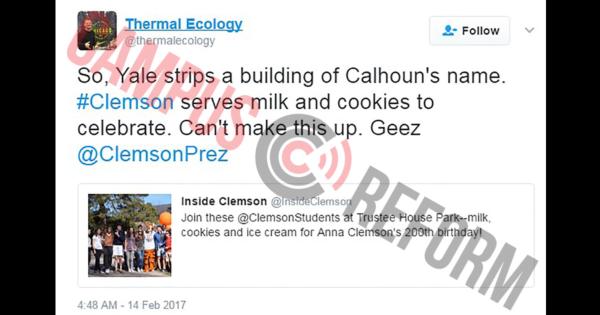 Seeking to take the pulse of the university community regarding the proposed name-change, The Tab Clemson polled students on the question this week, but found widespread opposition to the idea.

At press time, nearly 87 percent of the 211 respondents said that they oppose the renaming of Tillman Hall, whereas just over 13 percent were in favor.

"Although state law prohibits Clemson from changing the name, there have been very positive dialogues and actions about how we tell the history of Clemson University,” Clemson Director of Media Relations Robin Denny told Campus Reform.

“Our history is inextricably linked to its founders who lived in the south during the time of slavery and its immediate aftermath, and the university has consistently acknowledged that this great institution was shaped, in part, by imperfect craftsmen,” Denny added, noting that “there are a number of initiatives underway to ensure that our history–good and bad–is accurately told,” and that “a task force on the history of Clemson, appointed by the Board of Trustees, is now at work to do just that."