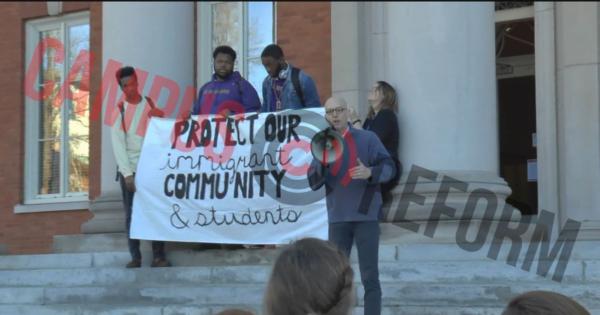 The “March Against Silence,” a collaboration among three Clemson professors who recently completed a week-long hunger strike, began at Clemson’s Cooper Library and ended at Sikes Hall, the site of numerous protest rallies, including a nine-day Sit-In last April, and Clemson’s de facto epicenter of controversy.

“[Trump] is attempting to disenfranchise our Muslim community, again, based on an ideology of hate and fear.”

P.J. Price, a leading member of the Southern Poverty Law Center’s Clemson chapter, spearheaded the protest armed with a megaphone, directing the crowd in chanting slogans like “No silence…NO BAN” and “Tell me what democracy looks like…THIS IS WHAT DEMOCRACY LOOKS LIKE.”

At another point, Clemson professor Todd May, a co-organizer of the march, directed a personal dig at the Clemson administration by leading the crowd in a chant of “President Clements, Provost Jones, where do you keep your backbones?”

May recently challenged Clemson President James Clements and Provost Robert Jones to a debate on Trump’s executive order, but did not receive a response.

As the march reached its terminus at Sikes Hall, police officers were standing by while several students displayed a banner proclaiming, “Protect our immigrant community & students.”

As the crowd formed a horseshoe around the steps of Sikes, a Clemson PhD student outlined the activists’ motivations.

“All of us live in a constant state of fear, that we and our loved ones and our friends, anyone could be deported at any time,” she declared, asserting that “this ban targets anyone who looks foreign.”

Clemson Professor and march co-organizer Mike Sears echoed the contention, saying, “The President of the United States is attempting to disenfranchise our Muslim community, again, based on an ideology of hate and fear.”

Referring to Clemson University’s decision not to rename Tillman Hall, he also called on the Clemson administration to, “denounce the name of a building that honors a white terrorist.”

Charging the Clemson administration with giving “tacit support” to the executive order by failing to condemn it, Kumanyika claimed that “the reason President Trump has the power to come for you now is [that] not enough people stood up when they were coming for black folks,” adding that “all of us have those opportunities to get on the right side of history.” 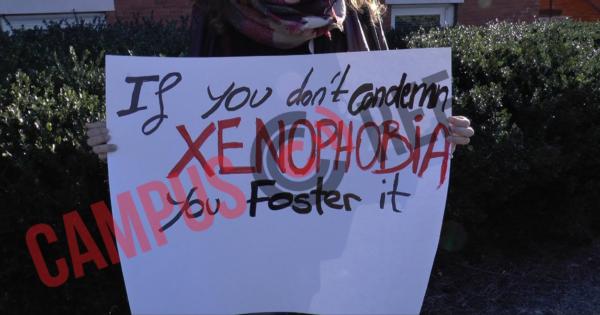 Following Kumanyika’s speech, Todd May took the stage and ramped up the attacks against the Clemson administration, accusing university officials of skirting around controversial issues on campus.

“We have a National Championship football team, but we have a World Champion administration calisthenics team right there in that building,” he said, gesturing toward Sikes while Clemson administrators Dr. Doug Hallenbeck and Dr. Chris Miller stood solemnly in the background. 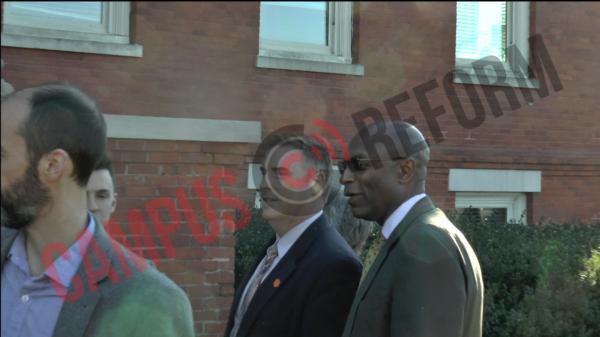 When interviewed about the goal of the protest, May told Campus Reform that the protesters simply wish “to have [President Clements] make a public statement against the ban and not hide in the cowardly way that he’s been hiding so far.”

“There will be more events,” he divulged, vowing that “we will make sure that we keep the pressure on.”