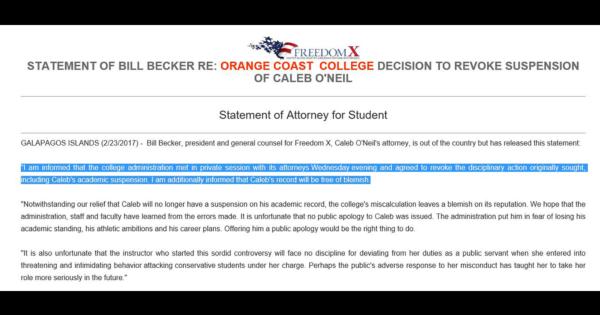 The Orange Coast College student who filmed his professor calling Donald Trump’s election ‘an act of terrorism’ has had his suspension and other punishments lifted.

Caleb O’Neil was given a notice of suspension earlier this month for violating a formerly obscure school policy against recording classroom lectures, and was also required to write an apology letter to both the school and Professor Olga Perez Stable-Cox, who has so far faced no disciplinary action.

“I am so happy! I’m just trying to get my education.”

According to FreedomX, the group defending O’Neil, OCC college administrators met with their attorneys Wednesday evening and decided to revoke O’Neil’s suspension, as well as the other punitive actions against him.

In a press release, FreedomX President and Lead Attorney Bill Becker stated that “[Orange Coast College’s] miscalculation leaves a blemish on its reputation, saying, “We hope that the administration, staff and faculty have learned from the errors made.”

“It is unfortunate that no public apology to Caleb was issued. The administration put him in fear of losing his academic standing, his athletic ambitions and his career plans. Offering him a public apology would be the right thing to do,” Becker continued, adding, "It is also unfortunate that the instructor who started this sordid controversy will face no discipline for deviating from her duties as a public servant when she entered into threatening and intimidating behavior attacking conservative students under her charge. Perhaps the public's adverse response to her misconduct has taught her to take her role more seriously in the future."

“I’m pleased to hear that the Board of Trustees has rescinded Caleb’s suspension. However, I’m saddened to hear that there will be no reprimand for Professor Cox,” seconded Joshua Recalde-Martinez, President Emeritus of the OCC College Republicans, in a statement to Campus Reform. “Myself, and many others included will continue to fight school administrations like OCC, who continue to unfairly target conservatives for their political beliefs.”

“I am so happy!” an ebullient O’Neil told Campus Reform. “I’m just trying to get my education. We started something big; now it’s time for other conservatives to keep the fire going.”