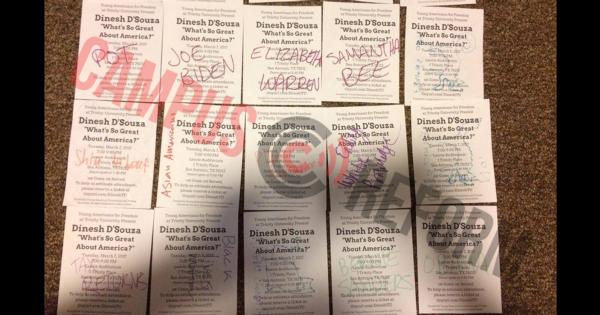 Jonah and Manfred Wendt, members of the “Tigers for Liberty” student group, distributed posters to dorms promoting an event entitled “What’s So Great About America?” hosted by Young Americans for Freedom.

“Once again liberals show how tolerant they are for ideas that are not their own.”

Upon returning to their dorm later in the day, they found all of the flyers returned and vandalized, along with two notes reading “Dear Wendts [sic], keep your propaganda to yourself. We don't like it in our faces,” and “I knocked but you weren’t here. I found your lost stuff and figured I’d return it. Have a good day.” 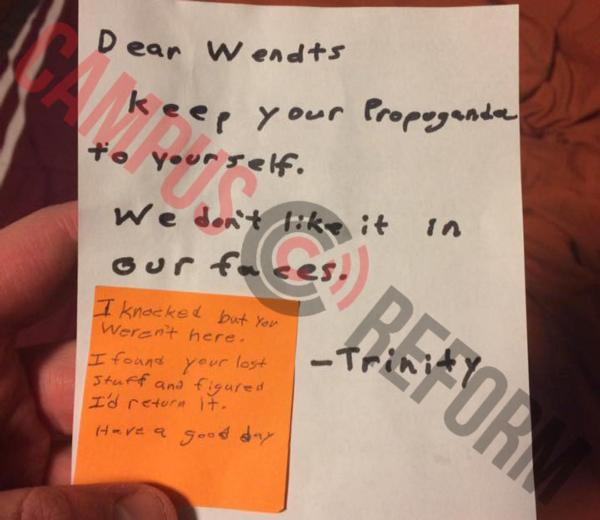 Jonah Wendt and his fellow club members distributed the flyers once again, but when he arrived back at his dorm room he found the flyers returned again, with answers to the question in the event’s title written in colored marker.

Among the things that Wendt’s classmates identified as being “great” about America were “pot,” “trans bathroom rights,” and “ending white privilege.”

“We’re okay If [sic] you make yourselves look bad, However [sic] when you bring controversial speakers to Trinity and put Trinity in a bad light. [sic] It effects [sic] all of our own reputations and makes all of us look bad” another note said. “We work hard to keep our reputations looking nice and we don’t need you messing them up.” 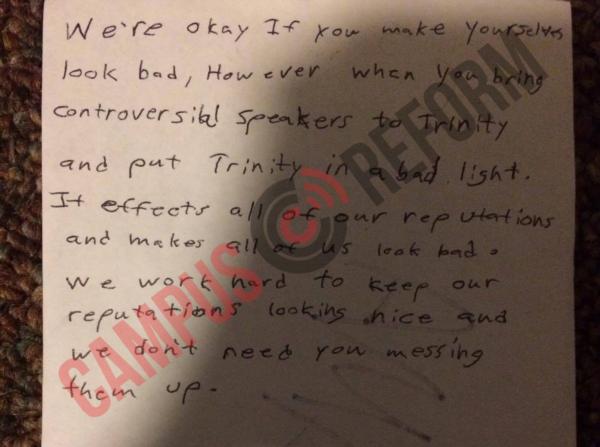 Accompanying the notes were two American flags turned upside down outside of Wendt’s doors.

Wendt claimed that the flags, which were hung outside the doors, were frequently turned upside down towards the beginning of the school year until the hall manager sent out an email asking for students to stop touching the flags, and that the activity has since resumed in response to the D’Souza event.

“These leftist intimidation tactics will not phase us,” Jonah Wendt, the field director of the Tigers for Liberty chapter, told Campus Reform. “Once again liberals show how tolerant they are for ideas that are not their own.”