Prof passes out flyers for anti-Trump protest during class 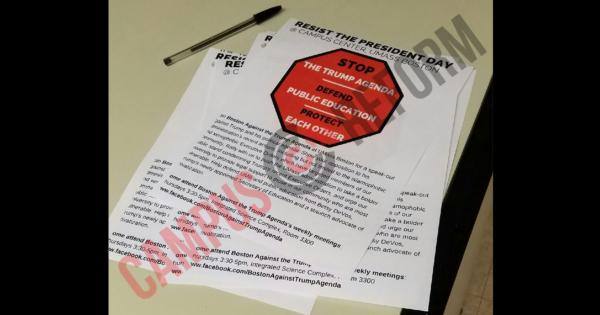 A professor at the University of Massachusetts, Boston used class time to offer students in his Moral and Social Problems flyers for an anti-Trump rally on President’s Day.

According to video evidence provided anonymously to Campus Reform, Philosophy professor Andrew Leong pointed out a stack of flyers to his class, explaining that after students handed in a paper assignment, they could “scream [their] lungs out in front of the campus center” at an anti-Trump rally.

“Flyers are here if you want to take one and remind yourself for next week.”

“Flyers are here if you want to take one and remind yourself for next week,” Leong informs the Moral and Social Problems class, referring to a stack of leaflets promoting a President’s Day event against Trump on campus called “Resist the President Day at Campus Center UMass Boston” hosted by a group called UMass Boston Against the Trump Agenda.

“STOP THE TRUMP AGENDA, DEFEND PUBLIC EDUCATION, PROTECT EACH OTHER,” the flyer declared.

The description for the rally explains that attendees would be able to speak out against Trump’s “Islamophobic” executive orders, as well the recent appointment of Betsy DeVos, “a staunch advocate of privatization,” as Secretary of Education.

Trent Sullivan, Co-President of the UMass Boston YAL chapter and a student in the class, said he was upset that the professor chose to share the flyers during class, telling Campus Reform he feels disgusted “that a class with such potential is wasted on petty agenda-driven points.”

Campus Reform reached out to professor Leong for comment, but did not received a response in time for publication.