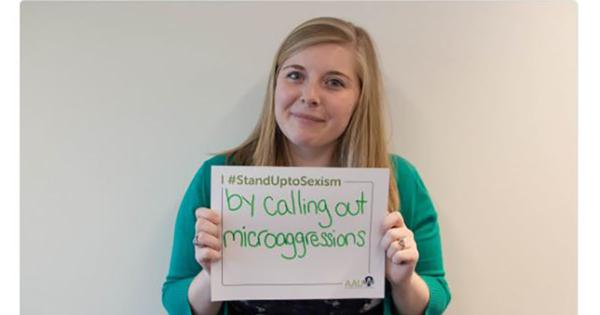 The #StandUpToSexism campaign is intended to combat “seemingly small acts of sexism” such as “implicit bias, workplace inflexibility, and prejudiced hiring practices” by having individuals post pictures of themselves holding signs explaining how or why they wish to “#StandUptoSexism.”

“I don’t owe the patriarchy a thing.”

“Sexist microaggressions, which are often wrapped up in racialized biases, make us doubt ourselves, whether we’re second-guessing a great idea, feeling self-conscious about our bodies, or receiving less pay or less respect,” asserts the AAUW press release. “Too often, women don’t want to make waves for fear of being labeled difficult, demanding, emotional, bossy, or any of the other words our society uses to discipline assertive women.”

According to a discussion guide posted as a resource for the #StandUptoSexism campaign, gender-based microaggressions are “subtle phrases or acts directed at us by others that make us doubt ourselves,” such as telling a woman that “you should smile more.”

“Hearing these comments day in and day out affects our personal, intellectual, and professional choices,” the group says, describing the #StandUptoSexism campaign as a way to “tackle this problem and empower women and girls to be the future leaders of tomorrow.”

As Campus Reform reported last month, though, Emory College professor Scott Lilienfeld recently published a study concluding that not only are efforts to combat microaggressions ineffective, but might even be counterproductive.

“There is no systematic research support for this hypothesis,” Lilienfeld told Campus Reform, adding that “Sensitizing individuals to subtle signs of potential anger might inadvertently end up making many of them ‘perceive’ slights even when they are not present.”

Lilienfeld’s findings are potentially relevant to the AAUW campaign, which asks participants to publicly call out and reject sexist microaggressions.

The campaign website features submissions from college students who are members of the AAUW National Student Advisory Council, which is described as a “feminist team that advises AAUW staff and leads campus activism projects.”

In one photo, a woman holds up a sign saying she fights sexism because “masculinity is so fragile,” while others assert that they do so because they “don’t owe the patriarchy a thing,” and “because my bellydancing isn’t about your sexual fantasies.”

In another, a young woman says she fights sexism “by calling out microaggressions.”

The gallery also includes a reference to a separate AAUW campaign protesting the fact that this year’s Academy Awards, Grammy Awards, and Golden Globe Awards “will all be hosted by straight, white men named James” and asking supporters to register their disapproval using “#HostTheMost” on social media.

Campus Reform reached out to the AAUW for additional information about the #StandUptoSexism campaign, but did not receive a response in time for publication. 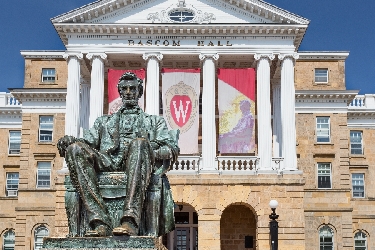