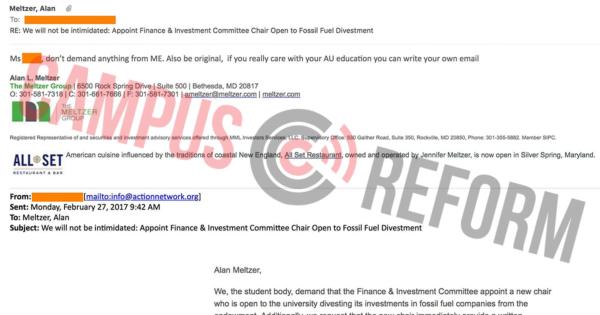 A member of the American University Board of Trustees is being accused of “intimidating” students by sending derisive replies to a form letter demanding divestment from fossil fuels.

“IMPORTANT: AU Board of Trustees member Alan Meltzer is sending aggressive replies to students who have sent our email demanding divestment,” blares an announcement from Fossil Free AU, a student group pressuring the university to sell of all its investments in fossil fuel industries.

“Don’t demand anything from ME. Also be original...with your AU education you can write your own email.”

“Fossil Free AU refuses to be deterred by this sort of blatant and embarrassing attempt at intimidating students,” the message declares. “We will not let any AU board member abuse their power in order to silence demands for justice.”

The “aggressive replies” to which the group refers were sent in response to a form letter that Fossil Free AU is encouraging students to send in anticipation of an upcoming Board of Trustees meeting at which a new chair is to be selected for the Finance and Investment Committee.

The Committee’s previous chairman, Gary Cohn, was “the biggest roadblock to divestment at AU,” Fossil Free AU asserts on a Facebook event page for a rally it is planning to hold during the March 2 Board meeting, during which its supporters will demand “a new chair who truly values justice over personal profits” and will “immediately reconsider the question of divestment.”

Along with the protest, Fossil Free AU has also been urging sympathizers to send a form email to members of Finance and Investment Committee “demanding that they pick a new chair who is open to eliminating fossil fuel investments from the endowment.” The form does not allow signatories to read or edit the text of the letter in advance of providing their information, but Fossil Free AU told Campus Reform that the website offers both options before the email is actually sent.

“Gary Cohn, a staunch opponent of divestment from fossil fuels, has resigned from the American University Board of Trustees to join the Trump administration,” a brief summary explains, adding that “Cohn used his position as chair of the board's Finance & Investment Committee to block divestment in 2014.”

The form letter adopts an accusatory tone, claiming that the Board’s 2014 rejection of divestment was premised on the AU General Counsel’s “incorrect” interpretation of a D.C. law requiring “prudent fiduciary stewardship” and insisting that the new Finance and Investment Committee chair “provide a written commitment that the committee will reconsider divestment no later than its November meeting.”

The letter, 129 copies of which had been sent as of press time, did not find a receptive audience with Meltzer, who began sending terse responses rejecting the demands and criticizing the senders for their lack of originality.

“Don’t demand anything from ME,” he indignantly responded to one submission. “Also be original, if you really care with your AU education you can write your own email.”

Other replies were sent from his iPhone, but the additional typos did little to obfuscate his meaning.

“Demand. Also can’t u with your AU education be original. Come on. If u really cares [sic] u might spend sometime [sic] and write something that is a little more intelligent,” he told one correspondent. Abbreviating the sentiment somewhat in another reply, he pointed out that an “AU education” is “not cheap” after reiterating his appeal for originality. 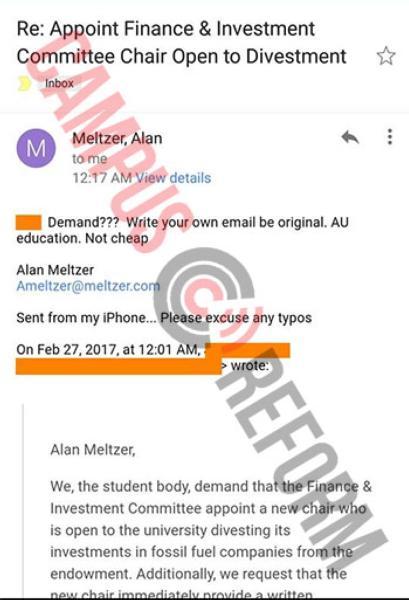 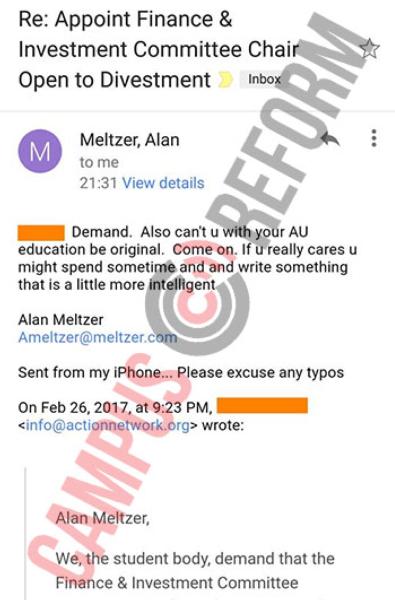 “Fossil Free AU is not intimidated by these aggressive emails, but we are surprised by the complete lack of professionalism employed by a man holding one of the most powerful positions at American University,” Fossil Free AU told Campus Reform, adding that its members are “amused by Meltzer's failure to see the irony in his sending completely incoherent emails claiming that it is we who need to ‘spend sometime and write something that is a little more intelligent.”