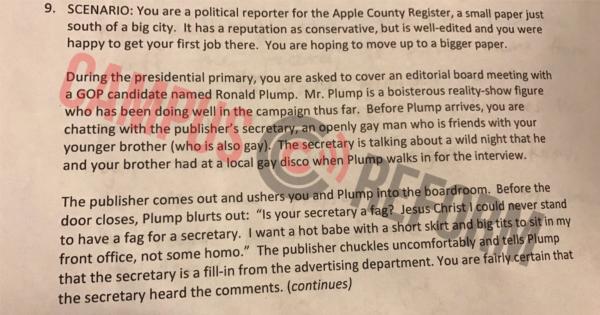 According to two students that took Mass Media Ethics with Professor Christopher Knap last semester, their first exam asked them to sort through the ethical issues in several hypothetical scenarios.

"I found it to be an extremely vulgar attempt to indoctrinate students and smear Donald Trump.”

One scenario told students to imagine they work at a small conservative paper and are tasked with interviewing “boisterous reality-show figure” and GOP candidate “Ronald Plump,” an obvious play on Donald Trump.

In the scenario, “Plump” disparages a gay secretary in the office, asking, “Is your secretary a fag? Jesus Christ I could never stand to have a fag for a secretary,” and adding, “I want a hot babe with a short skirt and big tits to sit in my front office, not some homo.”

Students are tasked with exploring the “huge ethical dilemma” regarding whether or not to publish the seemingly off-the-record comments.

According to a syllabus for the course, the quiz was worth 25 points out of an available 500 for the class.

Students are also told in the syllabus that a course objective is to gain an “understanding of the need for increased sensitivity reporting on, communicating with, and marketing to diverse populations.”

One student, who wishes to remain anonymous, told Campus Reform that he found it hypocritical that the journalism department teaches them to remain unbiased in their stories yet “fail to follow what they teach.”

“I don't understand why it was necessary to attack our president on the first test of the semester in media ethics, but we can't expect anything else from leftist institutions like CSU Long Beach,” the student asserted.

"I found it to be an extremely vulgar attempt to indoctrinate students and smear Donald Trump,” the other student said.

In Park’s class, students are assigned quizzes and hypothetical cases throughout the semester which are worth 25 percent of the total grade. The hypotheticals are intended to “sharpen your critical analysis skills, and to further prepare you for exams.”

In one of the alleged hypotheticals provided to Campus Reform, students learn about a tea partier that is obsessed with President Barack Obama’s national origin. 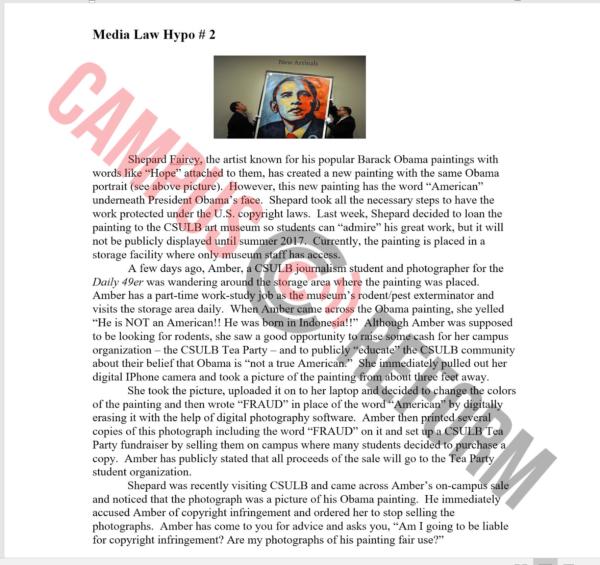 The tea partier, named Amber, is a staff member at a museum where popular paintings of Obama with the word “American” underneath are displayed.

Upon seeing one of the paintings, Amber yells “He is NOT an American!! He was born in Indonesia!!”

“She saw a good opportunity to raise some cash for her organization—the CSULB Tea Party—and to publicly ‘educate’ the CSULB community about her belief that Obama is ‘not a true American,” the hypothetical continued, describing how Amber then took a photo of the Obama painting and crossed out the word “American,” replacing it with the word “FRAUD,” and sold copies of the altered photograph to raise money for the CSULB Tea Party.

The assignment ultimately asks students to determine whether Amber committed copyright infringement, or if altering the photo for the purpose of fundraising constitutes “fair use” of the material.

The student in the course decried the apparent attack on conservatives, explaining that his courses don’t talk about leftists in the same disparaging manner.

“We're constantly told to be sensitive to others but there's no regard for the views of conservative students or the atmosphere these professors are creating for us,” the student told Campus Reform. “We are always portrayed negatively in lectures or assignment scenarios like this while there's zero criticism of leftist views”

Campus Reform reached out to Knap and Park to confirm the assignments and provide comment, but they did not respond. Spokespersons for CSULB likewise did not respond to several requests for comment.