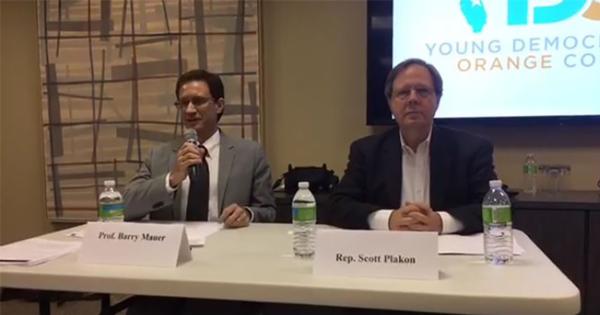 A video uploaded to Facebook last week shows a professor from University of Central Florida (UCF) slamming Republicans as anti-education and trigger-happy.

“The right wing doesn't want people to be educated.”

Mauer made the most shocking argument by far, proclaiming that campus carry is really a Republican plot to prevent people from becoming educated.

Referring to campus carry as "part of a conservative attack on many, many fronts on higher education, and frankly all of us that are in academia know about it,” Mauer declared that he and others in higher education “see it as a power grab and the reason we see it as a power grab is because the right wing doesn't want people to be educated. It wants them to be educated but not in the ways that involve critical thinking, solidarity, citizenship.”

Campus Reform reached out to Mauer to ask if he would clarify his remarks, and received in response a six page dissertation in which he asserts that the right-wing worldview is best summed up by Western film star John Wayne, and that right-wingers are steeped in fantasy and looking to prove themselves by establishing dominance through violence.

“Having the state protect me doesn’t allow me to prove myself. Therefore, the reasoning goes, the state emasculates me,” he said, attempting to mimic a conservative.

“The right wing, contrary to its public claims, is against safety because it prefers risk and danger,” he surmised, speculating that “those conditions allow right-wingers to fantasize about establishing their dominance through violence.”

“How dangerous is this right wing worldview? The logical consequence of their worldview is visible in John Wayne’s character, Ethan Edwards, at the end of John Ford’s The Searchers–when he indiscriminately kills and scalps Indians, and in Robert De Niro’s Travis Bickle character in Martin Scorcese’s Taxi Driver–when he goes on a killing spree to ‘clean up the streets,’” Mauer continued. “In other words, vigilantes are not heroes to be emulated; they are psychopaths with guns. Right wing vigilante fantasies depict a society in collapse; as right wingers act out their vigilante fantasies, they make the collapse of society a self-fulfilling reality.”

Mauer did, however, acknowledge that his study of English has not made him an expert on the Second Amendment.

“I never claimed to be an expert in gun rights, though I read a lot about it and write about it,” he explained. “I do claim some knowledge about education, which was the point of my being on the panel.”