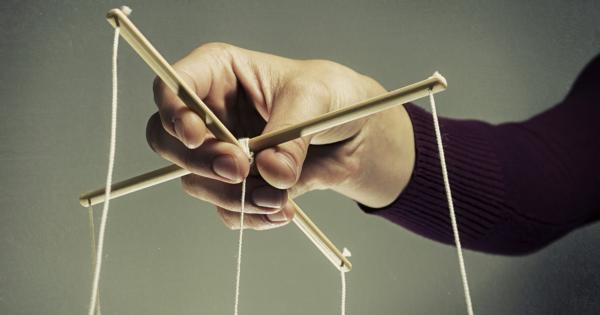 Sinclair Community College is apologizing for telling a student senator that he could no longer run for Senate president because he did not get administrative approval to identify as a student senator.

Forest Wilson, a student senator at SCC, was running for Senate president and planned to meet with SCC staff members to discuss his proposal to allow students to use food stamps in campus dining halls.

“I have a daughter that’s 12. I don’t want her in a situation like that 6 years from now in a public college.”

When Wilson reached out to Staff Senate, however, he was instead asked to meet with A.J. Owen, the Student Senate’s advisor, and Matt Massie, manager of Student and Community Engagement.

According to an audio recording of the meeting obtained by Campus Reform, the participants spent some time discussing the food stamp proposal before Wilson was informed that alleged “protocol violations” had disqualified him from running for president.

“Based on your protocol violations, things of that nature, at this point running for president, vice president, I don’t think is the best idea,” Owen stated. “I’d like to offer you to step in as the role of secretary as an executive officer on the Student Senate.”

As Wilson noted during the meeting, though, the Student Senate does not currently have any official protocol.

Owen and Massie claimed that Wilson broke the nonexistent protocol because he reached out to administrators without first getting Owen’s approval.

“For you to approach staff senate on your own without going through AJ...That was a pretty egregious action to just [say], ‘Hey, I’m gonna go do this,’” Massie explained.

“I’ve said from the get-go that I’m your liaison to the administration,” Owen added.

The two administrators also asserted that student senators cannot identify as such without prior approval because they could be interpreted as representing the entire Senate. Since Wilson signed emails as a student senator, he apparently violated this “protocol” as well.

“You signed your email [to the Staff Senate] as a student senator,” Massie said. “That’s specifically coming at it from a Student Senate perspective.”

Massie later seems to try and provoke Wilson, telling Wilson he would understand if he “flip[ped] us the big middle finger.”

Wilson told Campus Reform he “never expected this kind of response,” pointing out that not only is there no published protocol, but that students “have a right to say [they are a] member of the Student Senate.”

“[Owen’s] just very much against the concept of students having the right to use the Student Senate to express [ideas],” Wilson explained. “And it’s not just about my proposal—the point is people should have the right to exchange ideas.”

Wilson, who is a nontraditional student going through a career change at age 39, says that while he is confident that he can “handle pressure,” he worries about other students’ ability to express themselves.

“I have a daughter that’s 12,” he said. “I don’t want her in a situation like that 6 years from now in a public college. I want her to be free to express herself in a legal manner and explore new ideas.”

The next day, Wilson had a scheduled meeting with Vice President Scott Markland about his food stamp proposal, and shared what Owen and Massie told him. Markland promised to have someone investigate the issue.

SCC told Campus Reform in response to an inquiry on Monday that it would not allow Owen and Massie to nullify election results or require student senators to work through them, insisting that the administrators “made a mistake,” and that it would be rectified.

“Student leadership elections are totally based on a count of the ballots cast by students and will not be invalidated by administrators,” Adam Murka, Director of Public Affairs, wrote in an email. “Additionally, neither students nor student senators are obligated to work through a club adviser before contacting Sinclair officials.”

Murka added that the administrators are even being asked to express contrition for their behavior, saying, “The employees involved in mistaken advice to Mr. Wilson will apologize to him in person as they continue their dialogue about important issues facing our student body.”

However, Owen has proposed a constitution to the Senate that, if passed, would raise the same issues.

In the proposed constitution, student senators would have to run all “ideas” and “proposals” through the advisor, and senators would be expressly forbidden from contacting administration officials directly, as “that is the duty of the Advisor.” 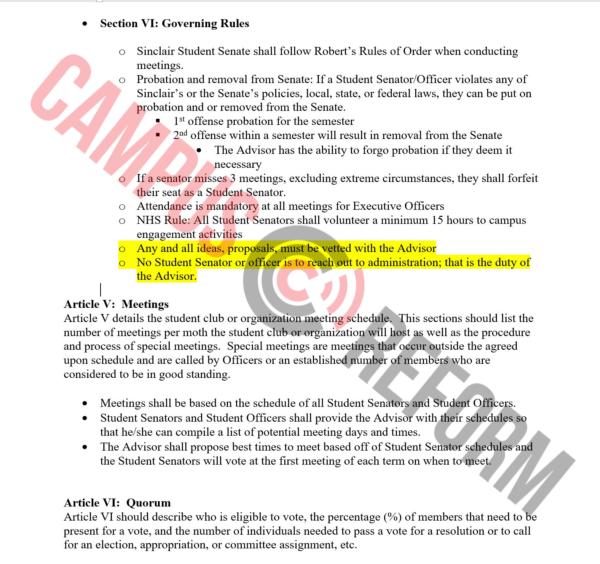 During a recent Student Senate debate over the proposed constitution, Wilson tried to share details of his meeting with Owen to explain why he opposes the highlighted provisions, but was cut off by Owen, who curtly declared that “that’s between me and you.”

“But it’s between them also,” Wilson protested, arguing that “if we’re a democratic group anyone is subject to this.”

Voting on the proposed constitution was ultimately tabled until the next Student Senate meeting, and afterward Wilson approached several other senators to warn them against adopting Owen’s measures.

“I just encouraged them that we have a chance to create a truly democratic Student Senate but that we have to guard against the administrator taking control of it,” Wilson said.