Amber Athey White House Correspondent at The Daily Caller @amber_athey on Mar 09, 2017 at 9:30 AM EDT 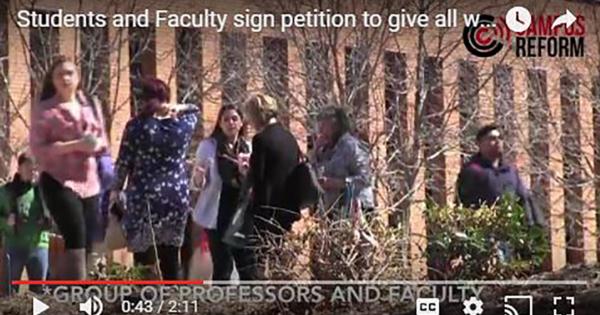 Women across the country participated in the "A Day Without A Woman" strike Wednesday, taking the day off work and shopping to call attention to alleged economic injustice.

To find out how far college students are willing to go for gender equity, Campus Reform traveled to George Mason University to float the idea of tuition discounts for female students.

“Thank you for all that you are doing.”

Campus Reform asked female students and faculty members to sign a petition that would lower the tuition that women pay to just 77 percent of the tuition that men pay, reflective of the "wage gap" statistic that states women only make 77 cents for every dollar a man makes.

“If we’re going to go out into the workforce and on average make less than men, then our degrees are technically worth less, too,” Campus Reform reporter Amber Athey said to one student.

Several faculty members chose to sign the petition as well, calling the petition a “novel concept” and applauding colleagues who chose to cancel class for the “A Day Without A Woman” strike.

One student approached Campus Reform after a group of professors left and explained that she was watching to make sure that they signed.

“Thank you for all that you are doing,” one female student graciously said.

In just over an hour, Campus Reform was able to corral 40 signatures on the mock petition, while just two students declined to sign after hearing the pitch.