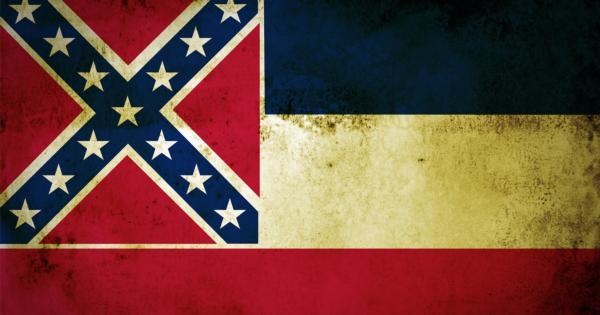 Mississippi lawmakers want to offer two of the state’s public universities a generous tax exemption, if only they agree to fly the state flag on campus.

Senate Bill 2509 exempts the “lands and property” of both Mississippi State University and the University of Southern Mississippi from taxation at the state, county, or municipal level, extending the exemption as well to any buildings and improvements “that may be leased to private entities for the purpose of offering affordable board” to students.

“Such University must prominently display and fly the state flag each day of the year.”

However, an amendment introduced by Republican State Rep. William Shirley was approved Wednesday adding that in order for either school to receive the tax exemptions, “such University must prominently display and fly the state flag each day of the year.”

This issue is specifically controversial because the Mississippi State flag also includes the Confederate battle flag in the top left corner, leading all eight public universities in Mississippi to stop flying the flag on campus in recent years, Southern Mississippi being the most recent to do so.

“We have all chosen to work, study, and live in a country in which debates like those around the state flag of Mississippi can take place and ideas can be civilly expressed and advanced,” USM President Rodney Bennett said in a statement announcing that decision. “While I love the State of Mississippi, there is passionate disagreement about the current state flag on our campuses and in our communities. I am looking forward to a time when this debate is resolved and USM raises a flag that unites us.”

Multiple local news outlets, including the Jackson Free Press and Mississippi Business Journal, initially reported Friday that SB 2509, including the flag amendment, had died when a procedural deadline passed, but Republican State Rep. Steve Hopkins told Campus Reform that those claims were premature.

Hopkins did predict that the amendment would eventually be dropped from the bill, but vowed that its proponents would include the language in other legislation, if necessary.

"SB 2509 is still alive, however we fully expect that the flag language will be removed once the bill goes to conference,” he explained. “With this in mind, we will attempt to add the language back in pending university appropriations bills."

Democratic State Rep. Chris Bell implored his colleagues to oppose the flag measure during debate on SB 2509, arguing that the displaying the current flag design “takes us back,” but Shirley insisted that his proposal has nothing to do with the banner’s design, saying it is merely intended to ensure that entities receiving state money display the state’s symbol.