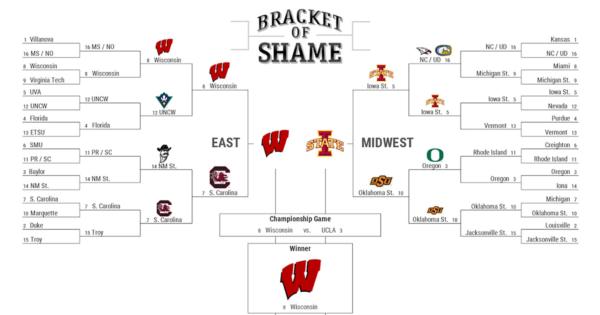 This is one championship no university wants to win.

Casey Mattox, the director of the Center for Academic Freedom with Alliance Defending Freedom, has made his picks in the Bracket of Shame, a massive 64-school tournament showcasing the worst freedom of speech abusers in higher education.

"This is one championship no university wants to win."

Mattox’s bracket sees plenty of twists and turns, pitting both public and private schools against each other based on their actual seeding for March Madness.

The school that has the most ridiculous free-speech policies moves on, culminating in a Final Four of Vanderbilt, UCLA, Iowa State University, and the University of Wisconsin-Madison.

UCLA, a private school with a three seed, faces off against #8 UW-Madison in the finals, with the Badgers emerging—well, if not victorious, then as the last school standing.

Mattox invites readers to make their own bracket selections and pick which school they think deserves the dishonor, a task made easier by his breakdown of each school’s speech sins.

Sterling Beard is Campus Reform's Director of Journalism Training. Prior to joining Campus Reform, he spent time as an editorial associate for National Review Online and as a staff writer at The Hill, where he served as the Intercollegiate Studies Institute's Lyn Nofziger Fellow and regularly appeared across the country on Fox News Radio to provide analysis of current events. In 2017, Sterling was named to The Chronicle of Higher Education's Influence List, one of nine people who "affected federal policy, campus culture, and the national conversation about education in 2017 — and who are likely to remain influential in the year ahead."