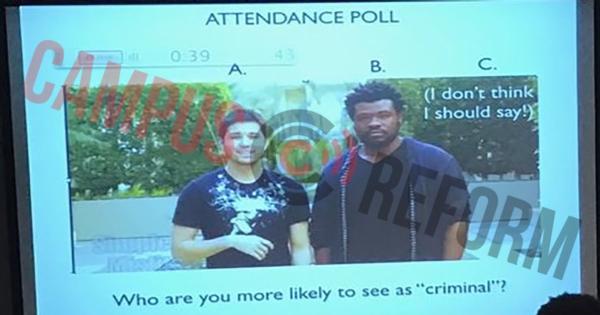 Students in a communication course at California State University, Long Beach are being asked to answer sensitive racial questions in order to prove they are present in class.

The syllabus for International Communication taught by Aaron Cargile explains that students will have to answer a poll question each time they are in class in order to prove their attendance.

“I left early because I couldn't stand [the cop bashing]. He told us he is scared when he sees a police officer.”

The attendance poll for March 14, which was provided anonymously to Campus Reform, asked students to identify whether they view a racially ambiguous man in a t-shirt, as opposed to a taller, larger black man in a sweatshirt, as more criminal.

“Who are you more likely to see as ‘criminal?’” a question placed under a photo of the two men reads.

In addition to picking either man as looking more “criminal,” students could also answer, “I don’t think I should say,” implying the student is embarrassed by their would-be answer.

A subsequent slide says, “Nothing in the world is easier in the United States than to accuse a black man of a crime,” a quote from black sociologist W.E.B. Du Bois. 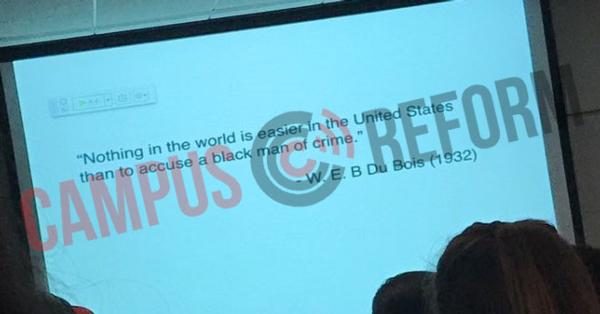 Conversation in the class then turned to the causes of police shootings of black men, which Cargile suggested was due to a lack of implicit bias training even though multiple studies have shown such trainings to be ineffective.

“I left early because I couldn't stand [the cop bashing],” an anonymous student in the course said. “[Cargile] told us he is scared when he sees a police officer.”

According to the syllabus, the March 14 course was supposed to be on “Culture and Verbal Communication.”

Cargile told Campus Reform that “students are not required to answer the question for attendance,” noting that he “provided a third ‘no comment’ option” and that students can also register their attendance by signing an attendance sheet in class.

A copy of the course syllabus obtained by Campus Reform, however, lists the “attendance polling question” as the only means of earning attendance points, explaining that the results can be used to verify that a student remained in class for the entire period.

In the event that a student misses the attendance polling question, Cargile says they can notify him of their “reasonable excuse,” and that he “may” agree to retroactively award the attendance point.

Yet the focus on race did not end with the class period, as students were later asked to complete Harvard University’s Project Implicit Test and discuss their results for an assignment.

One of the questions on the test asks students to identify whether they prefer white people to black people or vice versa.

“It was mandatory,” the student said. “We had to take it and record our results and discuss them in our discussion groups online.”

Cargile countered that while completing one of the Project Implicit Tests was a course assignment, students had the option of taking any of the tests offered on the website, which address biases based on gender, race, ethnicity, sexuality, age, and a variety of other factors.

“Because we are learning about implicit attitudes, it is appropriate for students to take any test of their choosing,” Cargile asserted, adding that, “if approached by a student with concerns about completing this, or any other assignment, I am happy to accommodate them.”