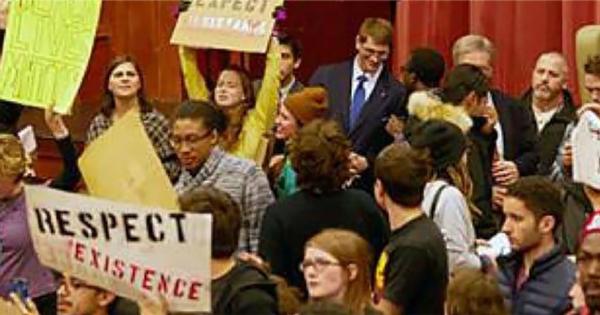 Socialist students are vowing to disrupt a Charles Murray lecture at Columbia University Thursday unless they are given a significant portion of the event to “expose his racism.”

The Barnard Columbia Socialists outline their protest plans in two Facebook event pages, one calling for students to assemble outside the venue shortly before Murray’s speech begins “to voice our opposition to Murray’s racism and bigotry,” and the other detailing a walkout strategy in the event that Murray is allowed to speak without interruption.

“We also hope...to discuss the most effective ways for fighting racism and the growth of the right.”

“Murray's work demonizing working-class people and people of color has been used by everyone from Bill Clinton and Newt Gingrich to today's neo-Nazi 'alt-right' to attack the most vulnerable populations in our society,” the description of the protest declares indignantly. “With Trump's election having emboldened some of America's most disgusting tendencies, we must not let Murray's completely discredited defense of racism go unopposed.”

Following the demonstration, members of the group plan to attend Murray’s lecture on whether “Elites are to Blame for the Rise of Donald Trump,” specifying that they will walk out if organizers do not turn the floor over to students wishing to berate Murray within the first hour.

“Briefly before 8:00 pm, unless our demand for a chance to contest Murray's disgusting racism is met, ISO members in attendance will be walking out of Murray's speech and hosting our own meeting discussing Murray's reactionary history,” the group explains. “We also hope that this can provide a space to discuss the most effective ways for fighting racism and the growth of the right—on campus and off—and why such a fight has to also be a fight with the fullest commitment to free speech and democratic rights.”

The demand that Murray’s speech be curtailed in order to allow ample time for criticism of his ideas was originally articulated in an op-ed for The Columbia Spectator written by unnamed members of the socialist group, but Columbia AEI Council President Jonathan Schatz-Mizrahi, whose group is hosting Murray, told Campus Reform that he has no intention of acceding to the ultimatum.

The socialist students did, however, receive support from professors at both Columbia and Barnard College, an affiliated school, more than 150 of whom signed an open letter echoing the group’s objections to Murray.

“Without engaging in anticipatory condemnation of Murray’s remarks, remarks that have yet to be given, we take his invited speech at Columbia as an invitation for a pedagogical moment,” the letter begins, asserting that “the corpus of Murray’s work has amounted to an ideological polemic that justifies the ongoing disenfranchisement of African Americans and other people of color, and more recently, poor and working class white people.”

According to the signatories, the crux of Murray’s argument is that “economically successful people can attribute their success to a kind of cognitive endowment, understood to amount to a high IQ,” and that most people lack sufficient intelligence to benefit from college-level studies.

Concealing their defensiveness with scare quotes, the professors lambast Murray’s contention that only 10-12 percent of high school graduates are intellectually equipped to thrive in college, characterizing his suggestion that the remainder would gain more from trade school as the path to “a happy, if modest, life.”

Further betraying their political bias, the faculty members go on to complain that, “by individualizing and naturalizing success and failure in American society, Murray underwrites the libertarian case that government measures to address systemic forces that create economic disparity (such as racism, capitalism, and neo-liberalism) are unnecessary.”

“We believe strongly in the right of student groups to invite speakers of their choice to campus,” the statement concludes. “But by the same token, those who find those speakers’ views abhorrent have an equal right to express their disagreement in a vigorous, although non-violent, manner.”

Law professor Katherine Franke, one of the statement’s signatories, told Campus Reform that while she doesn’t agree with what Murray’s views, she nonetheless believes students should be able to bring him to campus.

“That said, I don’t think his claims should go unanswered by his critics,” Franke clarified. “So, to borrow a First Amendment principle from Supreme Court Justice Louis Brandeis, the best response to bad speech is more speech.”

Neither the Barnard Columbia Socialists group nor its individual members responded to repeated requests for comment from Campus Reform.