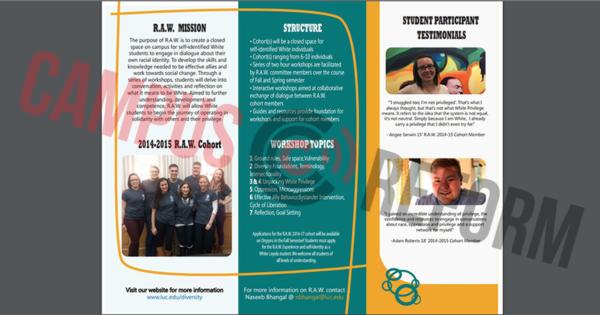 Students who “self identify as White” at Loyola University Chicago can apply to join a safe space to learn about white privilege, institutional racism, and internalized racism.

RAW, also known as Ramblers Analyzing Whiteness, is a small, closed group at LUC for white people to “engage in dialogue about their own racial identity” and “critically reflect on...their actions.”

“Simply because I am White, I already carry a privilege that I didn't even try for."

“R.A.W. is an affinity group for White students who have passion for ending racism, who have anger and confusion about institutional racism, who have guilt and hope about internalized racism, and who have questions about race that they are afraid to ask,” the group description reads.

Members of the group, who are chosen through an application process, participate in six two-hour sessions on safe spaces, white privilege, cycles of oppression, and bystander intervention.

An article from the University of Pennsylvania discussing potential benefits of “white affinity groups” is tacked onto the side of RAW’s website. The article claims that people find groups like RAW to be “wrong or threatening” because the “thought of white people convening to discuss race conjures images of the KKK and other supremacist organizations.”

“How ironic, given that white people routinely gather in monochromatic groups to discuss just about everything—except race—in our segregated society,” the article jests. “Somehow, white people discussing race together can seem wrong or threatening."

According to the guidelines for applications, though, whiteness is “difficult to define” and thus all students who “self identify as White” are eligible for admission.

However, if students are unsure if they qualify as “White,” they can also email one of the RAW guides to confirm.

Students who participated in the 2014-2015 version of RAW touted the social justice education they received in the group.

"'I struggled too; I'm not privileged'. that's [sic] what I always thought, but that's not what White Privilege means,” student Angee Serwin recalled. “Simply because I am White, I already carry a privilege that I didn't even try for."

Similarly, Adam Robers remarked that he “gained an incredible understanding of privilege.”

Campus Reform reached out to RAW for comment, but did not receive a response by press time.