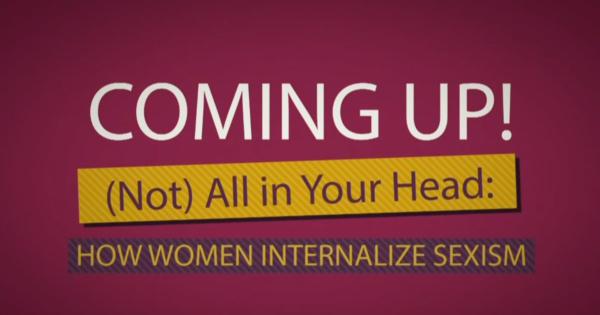 The American Association of University Women (AAUW) hosted a panel last week to lament the “psychological impact of gendered microaggressions.

“(Not) All In Your Head: How Women Internalize Sexism,” held at NYU Washington DC, featured a small roster of female academics, including a “world-renowned expert in microaggressions” Professor Gina Torino of SUNY Empire State College, and C. Nicole Mason, who directs a research center.

The panel began with Paige Robnett, the College Relations Manager at the AAUW, outlining the alleged impact that microaggressions have on their victims.

“Research shows that gender based microaggressions actually create a culture in which women’s work is devalued, and women start devaluing themselves,” Robnett argued. “The fact is, sexist comments add up, and they hurt women’s confidence.”

Hurt confidence has a number of negative impacts, including making women less likely to choose to run for office or negotiate their pay, she argued.

Robnett then introduced the panelists, who quickly got down to business — complaining about how unintentional questions and comments can hurt women’s feelings.

“Microaggressions can best be characterized as brief, commonplace and daily indignities that…. communicate slights… towards a target person or group," said Professor Gina Torino, the microaggression expert.

Examples of these microaggressions could include “being looked over in a meeting,” or being told “you’re too emotional,” explained Professor Torino.

Further, Torino explained that women can perpetrate microaggressions against each other by asking questions such, “when [are you] going to get married?”

“It’s not only men who are perpetrating these microaggressions; we’re doing it to ourselves. That’s the internalized sexist piece,” she said.

When the mic was passed to C. Nicole Mason, she explained that microaggressions aren’t just perpetuated at the individual level, but at the institutional level as well, citing a conversation she had with her high-school guidance counselor.

“For me, in my high school, going and saying ‘hey, I wanna go to college,” and the guidance counselor saying, ‘yeah’ I don’t think you’re gonna get in.”

Later, Mason argued that microaggressions are “meant to keep you in your place,” and to keep women “where they belong.”

The vast bulk of the panel conversation revolved around gendered microaggressions and the impact that this type of sexism has on women — a thread that continued all the way to the very end of the panel discussion.

The closing question for the Q & A section came in via Twitter, asking the prevalence of sexism and abuse of women in sports.

“Sports coverage in media is hegemonically male,” the moderator, Soraya Chemaly responded. “Sexual violence is part of the ethos of the culture — and that I think is part of sports.”

Chemaly concluded the panel by lamenting that football is America’s national sport.

Because football “is a patriarchal game,” Chemaly suggested, it “might not be the sport we want to represent us as a nation.”

The panel is one of three panels the AAUW organized as part of their #StandUpToSexism campaign. As Campus Reform reported last month, the AAUW’s campaign encourages women to fight sexist microaggressions by raising awareness through social media.

The AAUW did not respond to a request for comment from Campus Reform.