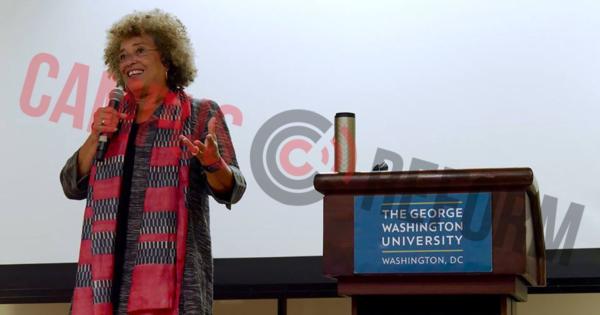 Her speech, titled “Freedom is a Constant Struggle: Why Movements for Social Justice Should Support Palestine," was sponsored by Students for Justice in Palestine, the GW Black Student Union, and the GW Feminist Student Union, and marked the beginning of SJP’S Palestine Awareness Week, which is meant to promote “awareness to the occupation of Palestine," according to member Kei Pritsker.

As Davis began, she asked the audience to “recognize that we are on colonized land,” saying, “as we talk about solidarity with occupied Palestine, remember the United States of America is also a settler colonial nation.”

“Why is it wrong to criticize the state of Israel?" she asked incredulously, earning a round of cheers and applause from the audience by suggesting that opposition to the State of Israel is actually beneficial for the Jewish people.

“We say no to Israel’s ethnic cleansing strategies. In standing up against the racism of the state of Israel, we are passionately saying no to anti-Semitism as well,” she argued. “This is supposed to be the dismantling of the era of Israeli occupation of Palestine. It has been long and coming.”

Davis asserted that Israel gets the tear gas it uses in Palestine from the same American company that equipped police forces in Ferguson, Missouri, and that the U.S. “gets their [sic] anti-terror policies from Israel.”

“Like the U.S., Israel likes to represent itself as a paragon of democracy,” she continued. “One of the ways it asserts its democratic essence is by pointing out it's a paver for LGBTQ communities, but Israel does not say that it is welcoming to queer Palestinians who call for justice for their people.”

Davis then sought to connect the Palestinian cause to the issue of Black Lives Matter and the U.S. prison system, casually tossing in a complaint about the “gender binary” in the process.

Moreover, she argued that prison is a “gendered institution with a gender binary structure,” and that the “abolition of the prison will also entail the abolition of gender policing.”

[RELATED: Feminist prof: America should stop putting women in jail for anything]

“The U.S. is a prison nation....if we call the U.S. a prison nation Palestine under Israeli occupation is certainly the worst possible example of a carceral society,” Davis continued. “Palestine is the largest open air prison."

Angela Davis has a history filled with controversy, which includes earning a spot on the FBI’s Top Ten Most Wanted Fugitive List in 1970 after being accused of helping the Soledad Brothers in the kidnapping and murder of four people, including a judge.

President Richard Nixon congratulated the FBI at the time on the “capture of the dangerous terrorist," but Davis was later found not guilty on all charges.

The radical activist was fired from teaching at UCLA in 1969 because of her communist ties, and then-Governor Ronald Reagan fought to prevent her from teaching in the University of California school system ever again.

GW students attending Monday’s event were excited to hear from Davis and have the chance to meet and ask her questions afterward, with some even taking along the signs they carried at the Women’s March for Davis to sign after the event.

According to an EventBrite page for the speech, Davis had also brought Palestine front and center at the Women's March on Washington, saying, "Women's rights are human rights all over the planet and that is why we say freedom and justice for Palestine."

“She’s amazing, and I really admire her work,” one student told Campus Reform, remarking on the serendipity of being able to fulfill a course requirement by attending.

“I’m attending this for my freshman writing seminar on the exploitation of African American culture (we’re required to attend a few events outside of class),” the student explained. “But also just because, Angela Davis. Like, she’s amazing.”

Campus Reform reached out to GW for Israel for comment on the Davis event, but did not receive a response in time for publication.

Kara Zupkus is a Washington, D.C. Campus Correspondent, and reports liberal bias and abuse on campus for Campus Reform. She is a Senior at The George Washington University, where she serves as Chapter President of Young America's Foundation. She has previously interned at the Washington Examiner and NBC News.