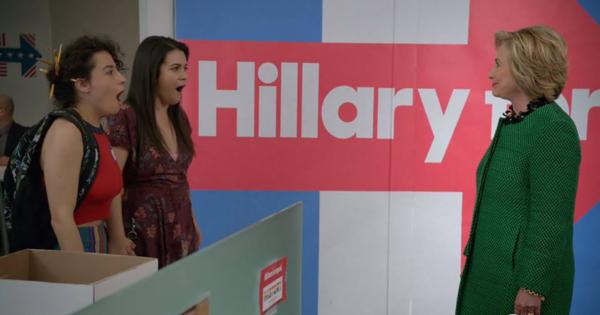 Hillary Clinton’s failure to win the 2016 presidential election has apparently not diminished her favorability among liberal college students, who received her with a standing ovation at Georgetown University Friday.

Clinton returned to Georgetown to present the Hillary Rodham Clinton Awards for Advancing Women in Peace and Security, which are given out annually by the Georgetown Institute for Women, Peace, and Security.

“Here I go again talking about research, evidence, and facts.”

Prior to presenting the awards, Clinton spoke for a bit longer than thirty minutes regarding the role of women in international politics, peppering her commentary with some not-so-subtle digs at the Trump administration.

While referencing a study about the effects of having women present during peace negotiations, for instance, Clinton jested, “Here I go again talking about research, evidence, and facts,” eliciting the loudest and most enthusiastic applause of any point in the event aside from Clinton’s initial entrance.

Other parts of Clinton’s speech suggested that the current administration is not keen on the idea of elevating women to leadership positions, despite Trump’s reliance on his campaign manager, Kellyanne Conway, who became the first woman to manage a successful presidential ticket.

“We have to ask, will [the U.S.] be left behind or will we continue to lead the way?” Clinton asked, referring to the goal of getting more women to enter international politics.

"I hope the answer is that we will do whatever it takes to make our country and our world more secure," she said, but added that “the world must continue this work with or without US involvement,” earning her another round of applause.

Clinton also attacked Trump’s insistence on cuts to international aid, arguing that it would be “a blow to women and children and a grave mistake for our country.”

When Clinton’s speech concluded, Georgetown students gave her another standing ovation and dozens of students left the event before the awards were presented, presumably because they were only there to listen to Clinton.