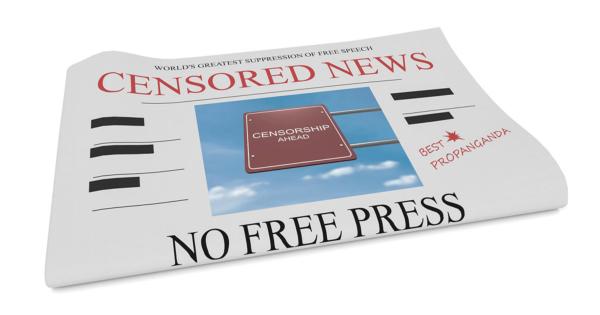 A student journalist was recently thrown under the bus by her school’s campus newspaper after she described a professor’s comments about white people as disgraceful.

In fact, The Sou’wester, Rhodes College’s student publication, retracted not only the article in question, but even withdrew the entire issue from print because of Lynsey Campbell’s alleged “unimpeachably false” writing, a claim Campbell has summarily rejected, standing by the opinions she espoused in her since-retracted op-ed.

“[The paper] bills itself as a voice for free and open discussion of issues, but it's obviously anything but.”

According to images of the March 24 print edition of the Sou’wester obtained by Campus Reform, Campbell had taken the negative position on renaming an on-campus building known as Palmer Hall, named after Presbyterian minister Benjamin Palmer, who defended slavery after Lincoln’s assassination but also devoted a large portion of his life to establishing what is now Rhodes College.

In her rebuttal, Campbell argued that while students should not defend Palmer’s rhetoric, they ought to be more concerned with racists who currently reside on campus rather than ones from the past, referencing several Tweets from professor Zandria Robinson, who has repeatedly leveled hateful and even threatening rhetoric against white students. 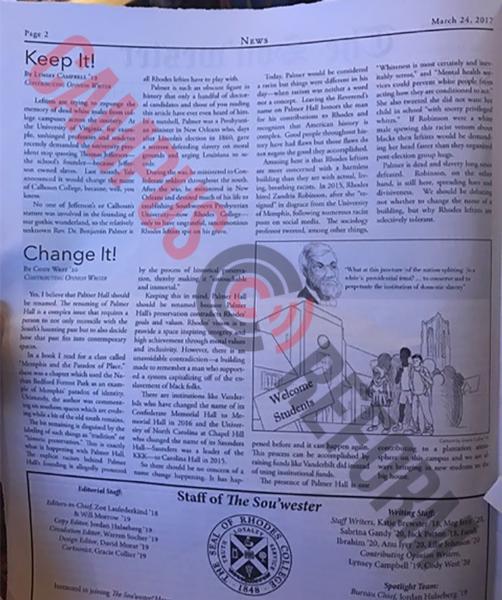 In one instance, for example, Robinson explained that she is “ontologically ratchet,” elaborating that her “instinct is to curse, jump a fence or table, and/or pull a weapon” when speaking with students who do not share her background.

“Be mindful that if I am meeting with you, or talking to you, and you are not a black girl survivor genius as I am, which likely you are not, I am restraining myself in ways that are contrary to my ontology so that you can be comfortable,” she continued, then describing herself as “a monster who chooses every moment not to just eat you and go about my day.” 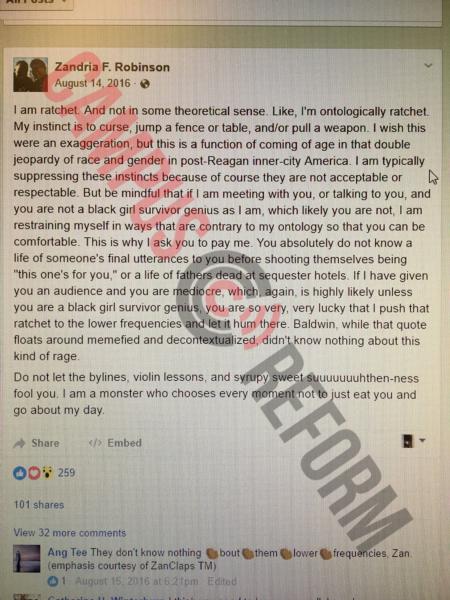 In an earlier instance, as Campus Reform reported, Robinson demanded that her peers stop arguing that some ethnic minorities are admitted to colleges merely for their heritage rather than on merit, writing “don’t you ever let me hear tell of you perpetuating these racist lies again. Not even in your head. Not even in jest. Because if you do, I will come for you.”

Around the same time (June 2015), other outlets, such as Fox News and a college blogging site, had unearthed several similar comments as Robinson resigned from her post at the University of Memphis on June 11, just six days after Campus Reform had published its initial report on her.

Consequently, in her Sou’wester op-ed, Campbell elected to refer to Robinson’s resignation as one made “in disgrace,” a word choice that resulted in the Sou’wester’s editorial board retracting her article, pulling the issue, and condemning her opinion as “libelous.”

“One of the opinionated editorials, written by Lynsey Campbell ’19, contained egregiously libelous information regarding Dr. Zandria Robinson. Campbell claimed that Robinson had ‘resigned in disgrace’ from the University of Memphis due to an incident with her Twitter account,” the statement read, then describing Campbell’s writing as “completely and unimpeachably false.”

Yet the image of the printed version of the articles listed both Campbell, and her opponent Cody West, as members of the “writing staff.”

Meanwhile, Campbell’s editorial had actually been solicited by Sou’wester copy editor Jordan Hulseberg, who, according to Facebook messages obtained by Campus Reform, had requested Campbell’s services because someone had told him that she “would be a good person to ask to write the op-ed opposed to changing the name.” 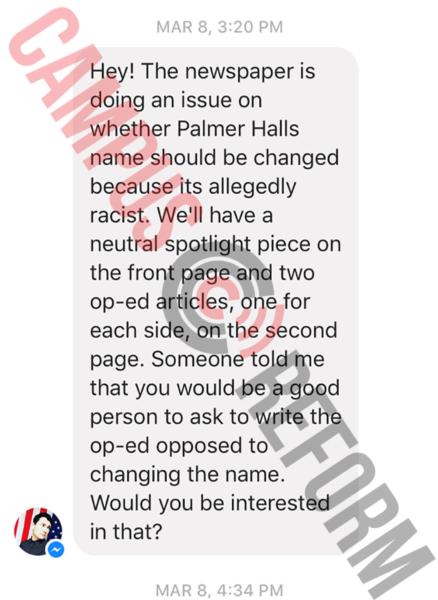 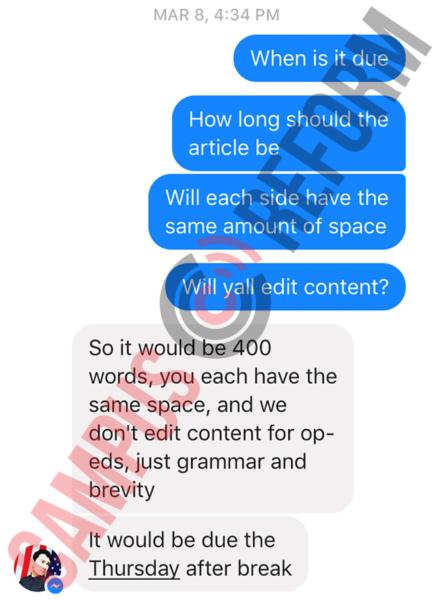 “The Sou'wester came to me and asked me to write the editorial. I did that. Sure, I could have written a bland, boring editorial, in the usual style of The Sou'wester, defending Benjamin Palmer, but I didn't,” she explained to Campus Reform. “You'll note I never even defended Palmer's past statements on slavery or secession. I merely stated [that] leaving his name on the building honors the man for his contributions to Rhodes and recognizes that American history is complex.”

Campbell went on to note that she could not believe how many comments she saw on Facebook declaring that “the Sou’wester should not have even published my editorial, and defending Robinson’s past racist comments,” saying such commenters were “basically proving [her] entire point of selective tolerance.”

“My article is factually accurate. To accuse me publicly of libel is itself libelous. Seriously, what reputable newspaper even does something like that?” she asked, describing the Sou’wester as a “high school newspaper that self-censors” out of fear.

“The Sou'wester bills itself as a voice for free and open discussion of issues, but it's obviously anything but that. It's more like a high school newspaper that self-censors itself out of fear of being called into the principal's office,” she concluded. “Its idea of insightful, provocative, hard-hitting journalism is what to name the stray cats on campus.”

Campus Reform asked the Sou’wester to address the argument that Campbell’s language was not libelous because there are facts given to support her opinion, but multiple inquiries went unanswered.