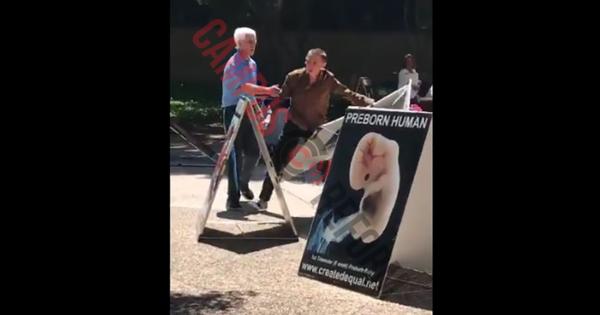 A Texas State University student was caught on camera Monday screaming at an older man and destroying a pro-life display.

“I am a supporter of free speech, but again, I think everyone was secretly wanting to do what he did.”

“Get the fuck out of here with this bullshit!” the unnamed student can be heard screaming at an older man. “This is fucking bullshit! Get this shit out of here!”

He takes the time to remove his backpack and set down a bouquet of flowers and a balloon before violently destroying the display.

An older man follows the student and says “It doesn’t matter, this is free speech,” but the vandalizer responds “no it’s not man, it’s wrong!”

Shockingly enough, fellow Texas State students, including Brockway, were thrilled by the vandalism.

“I was shocked, but I have to admit I admire him in some ways because I think he did what we were all wanting to do,” Brockway told The Tab. “I am a supporter of free speech, but again, I think everyone was secretly wanting to do what he did.”

Other twitter users began responding to Brockway’s video of the incident praising the attacker, one calling him “an icon” and a “hero of the people,” while another denounced the pro-life signs as “mentally distressing.”

“What can we do to make sure this student is safe from any university action?” the group asked.

Colton Duncan, Vice President of the Student Body, however, decried that people on campus would resort to violence in order to make their political points.

"It is very unfortunate to see radicalism, in whatever form it may come, whether it's disgustingly racist flyers posted on campus, radical speakers funded and sponsored by the University, or the vandalization of property," Duncan told Campus Reform. "This growing trend of resorting to violence when disagreements arise must not seep its way into our campus."

Campus Reform spoke to a university official at Texas State who is looking into the incident. This article will be updated with any comment that the university might provide.