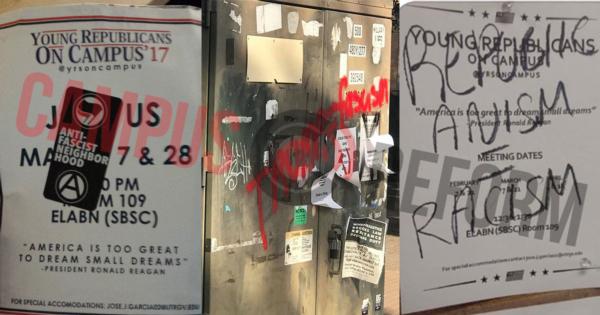 Republican students at the University of Texas Rio Grande Valley have had their promotional materials repeatedly defaced with messages equating the GOP to "racism" and Donald Trump to "fascism."

A member of the Young Republicans on Campus (YRoC) group, who spoke with Campus Reform on condition of anonymity, alleged that the “antifa” movement was behind the vandalism, pointing to a sticker on one of the flyers that read “Anti-Fascist Neighborhood.”

“I think people don’t know how to respect others’ thoughts and opinions,” the member said, claiming that they were once harassed by other students for wearing a “Make America Great Again” shirt.

Nor was this the first time that YRoC materials have been vandalized on campus. In February, YRoC posters were crumpled up, and spray painted with black X’s and slogans such as “Trump = Fascism,” and “Republicanism = Racism.”

In early March, one alleged UTRGV student, identified only as “andrea” on Twitter, continued the trend, posting a video of her putting a cigarette out on a YRoC poster with the caption “fuck republicans and fuck reagan” [sic].

The following day, the University Police Department use email to notify the campus of a hate crime, explaining that someone had used red spray paint to write “Good Night White Pride” on campus.

“Andrea” tweeted a picture of the email, retorting, “damn fk utrgv how is this a hate crime.” 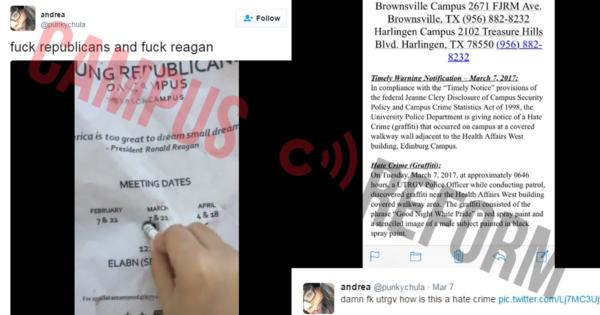 Campus Reform reached out to the account’s owner for comment, but did not receive a response in time for publication.

In a response to the vandalism, YRoC posted a statement on its Facebook page rebuking the perpetrators, accusing them of hypocritically violating the values often espoused by the left.

“No disagreement, no opinion, and no hatred can ever justify the defacing of property, regardless of who it belongs to,” the statement declared. “They [the vandals] claim to love diversity, yet hate dissenting views. They love tolerance, but only when it is directed towards them.”

YRoC concluded the statement by asserting that its members always respect the property and rights of other groups on campus, and that they “ask all other organizations to do the same.”

The anonymous YRoC member seemed concerned that the administration hasn’t done enough to combat the vandalism, telling Campus Reform that, “as far as I know, [the administration] has not done anything.”

Campus Reform reached out to UTRGV for comment, but did not receive a reply in time for publication.