Peter Van Voorhis Contributor at The Washington Examiner @RepublicanPeter on Apr 25, 2017 at 10:08 AM EDT 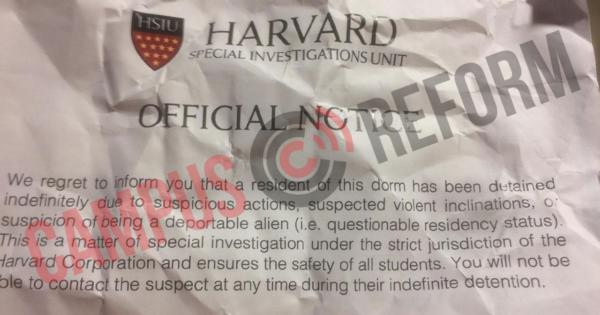 A coalition of leftist groups at Harvard University spread hundreds of fraudulent letters across campus telling students their dorm mates had been “detained indefinitely” by the school’s Special Investigations Unit.

The letter, which was actually written by the Harvard Palestine Solidarity Committee, Harvard Consilio Latino, Harvard Islamic Society, and Harvard Black Student Association, contained an official Harvard University seal that made it appear to come from the school.

“I’m all in favor of free speech...but the double standard that seems to be encouraged...is puzzling."

“A resident of this dorm has been detained indefinitely due to suspicious actions, suspected violent inclinations, or suspicion of being a deportable illegal alien,” the front of the leaflet stated. “This is a matter of special investigation under the strict jurisdiction of the Harvard Corporation and ensures the safety of all students. You will not be able to contact the suspect at any time during their indefinite detention.”

On the reverse side, the flyer revealed that “this is not a real notice,” but expressed hope that “the unsettling nature of this notice allows Harvard community members to reflect on the reality of people who face these kinds of unwarranted disruptions of life.”

The authors then called to “condemn systemic injustice of this kind,” and detailed Israel’s supposed crimes against Palestinians in prison. It also claimed that African-Americans are arrested ten times more than others due to their skin color, and that Latinos were being pulled over and killed by police officers across America for the same reason. 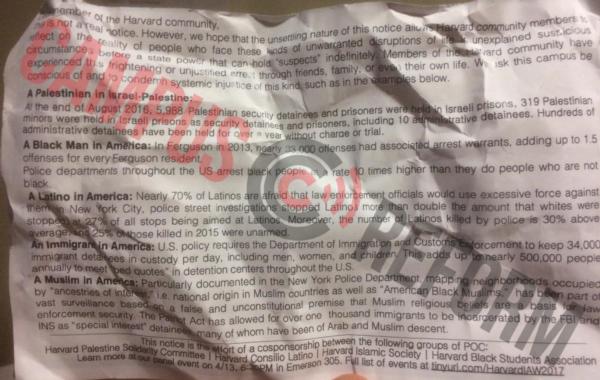 After criticizing American policy toward immigrants and Muslim-Americans, the letter includes a link to the group’s upcoming April 13 event, titled “Protecting Our People: Immigration and Documentation Between Latinx and Muslim communities.”

Harvard University has not responded to a request for comment on this matter, but a student who received one of the fliers agreed to speak anonymously, citing fear of retribution from the school or peers.

"I think it’s interesting how this sort of thing is constantly propagated around campus, but the moment someone says something in favor of Trump, stricter immigration laws, or fiscal responsibility, you get bashed for it,” the student told Campus Reform. “I’m all in favor of free speech, and I support the right of these groups to do what they did, but the double standard that seems to be encouraged around this high-profile university is puzzling. I think it severely limits one’s overall learning potential as a student."