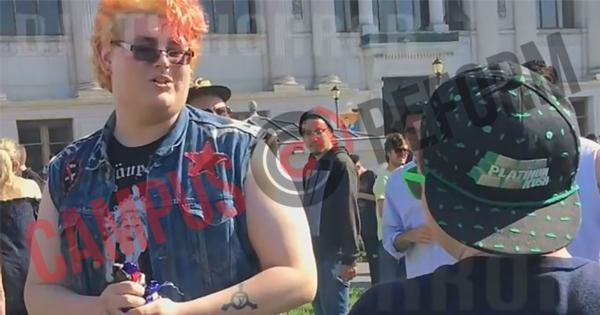 A transgender person at the University of California, Berkeley was recently filmed threatening members of the College Republicans who mistakenly referred to him as a man.

A recording of the incident begins with the transgender person vandalizing a Donald Trump campaign sign, to which one member of the College Republicans responded by facetiously remarking, “there’s a big man” in reference to the childishness of the stunt.

“[She] picked the smallest guy in the group to display [her] heteronormative masculine dominance.”

The transgender individual in question was not pleased by the comment, and responded by aggressively asserting that she is “not a man.”

“I’m not a man. Fuck you. I’m a fucking woman. Fucking respect that,” she declared, at which point one member of the College Republicans asked if the individual attended the California institution, and the transgender woman responded by indicating that she did not attend the school.

“I won’t go to a jail for a fucker like you,” the transgender individual continued after a CR member inquired as to whether she was going to assault other members of his club.

The altercation took place at a barbeque hosted by the College Republicans, which club member Erol Morkoc told Campus Reform was disrupted when the transgender person came “tearing through the crowd and attacked [the] sign like some rabid dog.”

Members of the conservative organization then challenged the transgender person on why she had vandalized the Trump campaign sign, to which she responded by indicating that she doesn’t “believe in property.”

One CR member, Naweed Tahmas, sarcastically inquired as to whether he could take the shirt off of the transgender person’s back, to which she retorted that he could not, because then he would be “attacking her.”

“I didn’t have to do that, but I find your fucking ideology disgusting,” she continued, in reference to her act of vandalism, finally leaving the Barbeque after referring to Tahmas as a “fucking fascist” and indicating that she had “friends smoking weed somewhere” whom she could join.

“I'm a Turkish immigrant trying to buy a burger and I'm like 5'5”. [She] picked the smallest guy in the group to display [her] heteronormative masculine dominance” against, Morkoc told Campus Reform. “This event is even more proof why students are staying away from expressing any conservative values. A person can't even get a burger in broad daylight without being attacked for being a ‘Nazi.’”