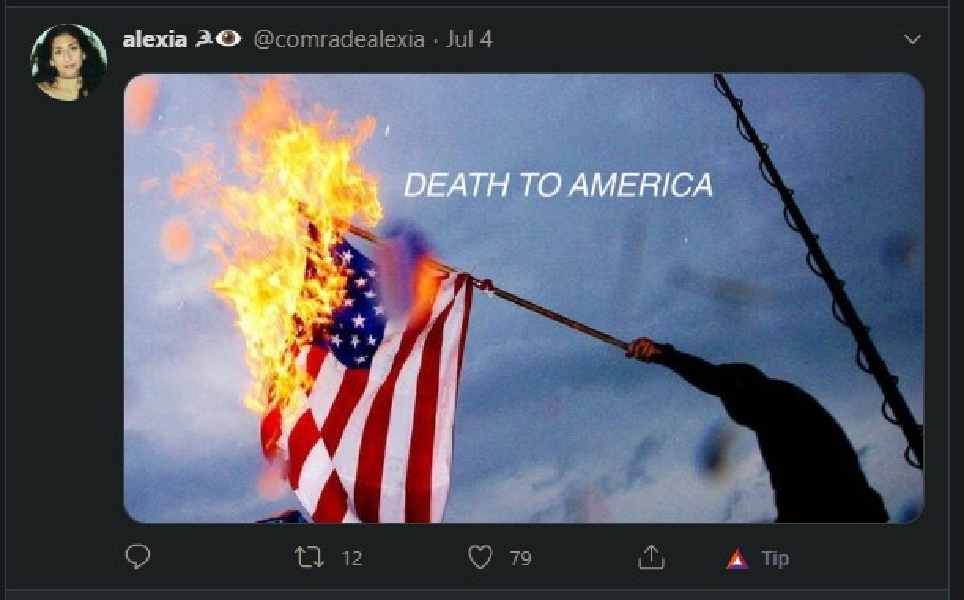 A student senator at Arizona State University has come under criticism for controversial statements in which she praised the Chinese Communist Party and expressed contempt for the United States of America.

Student Senator Alexia Isais, a staunch and open communist, has made statements on Twitter expressing unorthodox views on various political issues.  These tweets have offended some students due to their anti-American sentiments and fondness for the Chinese Communist Party.

Isais shared a tweet from ASU College Republicans President Joe Pitts in early July, wherein he criticized the student newspaper’s coverage of China’s COVID-19 response.  Isais offered a retort, saying that the “CCP has done more good in the world than the USA ever has and ever will.”

In a reply to her retweet of Pitts, she added “also death to America,” a statement she has made publicly on more than one occasion.

On Independence Day, Isais tweeted an image of a man holding an American flag that had been set on fire, with the caption “Death to America.”

Isais represents the College of Liberal Arts and Sciences in the Undergraduate Student Government’s Senate, the body that crafts and votes on legislation affecting the ASU student body. Isais is also the President of Students for Socialism ASU, and a former columnist for ASU’s student-run newspaper The State Press.  She is a self-described communist and belongs to the Party for Socialism and Liberation, a Marxist-Leninist political organization.

Isais defended her comments to Campus Reform, saying: “It's important for me to be unapologetic about my political views as a Mexican-am*rican woman who’s voice is underrepresented, especially within the world of neoliberal academia.”

She went on, indicating that “our field is dominated by neoliberal white men.”

“I do wish for the demise of the United States of America, as it stands today as a settler-colonial empire which has genocided an entire population of indigenous people, enslaved Black people, and continues in its imperialistic reign of terror all over the globe,” Isaias said.

She clarified that this means she is “against the government, not the people of the USA” noting that she is an American citizen herself.

In defense of her assertion that the Chinese Communist Party has done more good than the United States government, Isais said, "They got rid of landlords, the COVID response was incredibly responsible and coordinated for being the literal starting point of the pandemic itself.”

She also dismissed concerns that her strong political biases and anti-American sentiments impacted her service on the Student Senate.  She claimed that “the only people concerned are people on the College Republican board, College Republicans United, or any other diaspora of racist careerist folk.”

President of the ASU College Republicans Joe Pitts objected to these statements, telling Campus Reform that ASU is “proud of the legacy of veterans on campus and civic leaders who make our university great” highlighting the example of Pat Tillman, a former ASU Sun Devil and Arizona Cardinals safety who was killed by friendly fire in Afghanistan while serving in the army.

Pitts noted that Isais’ comments are an “affront to civility and do a dishonor to all those who have fought and died for our exceptional nation.”

He opined that “she and the socialists on campus have a history of inflammatory rhetoric and racism,” citing their positions on the Israel-Palestine conflict, and admiration for notorious Communists like Fidel Castro.

Pitts also rejected Isais’ claims that the only people at ASU offended by her statements belong to his group, saying “I’m sure that our university and the overwhelming majority of our students are equally as appalled by her heinous conduct” and suggested that students should “ignore her hateful, angry outlook and continue to do what Americans do best.”

Pitts also called upon the ASU administration to take her rhetoric more seriously.

He acknowledges that Isais is “entitled to her conscience, however wrong she may be” but also believes that “she should not be serving as a student government senator so long as she continues to promulgate such hateful, anti-American speech.”

College disinvites conservative speaker over 'issues' with his 'values' Shares