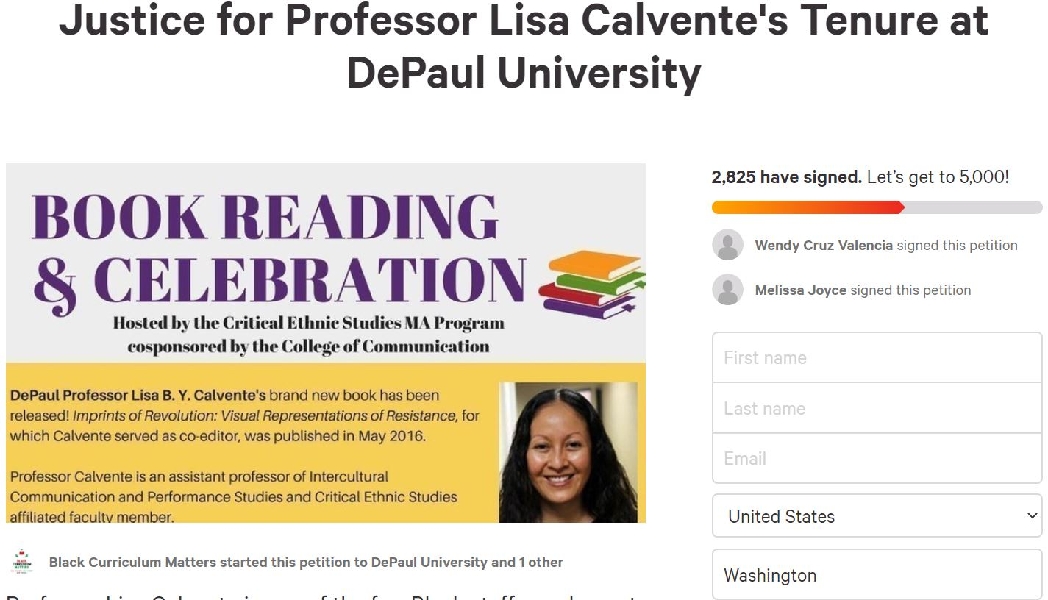 A communications professor at DePaul University was denied tenure and her employment with the school was subsequently terminated.

The next day, she blasted an email to students, accusing the university of discrimination, racism, and sexism. Now, she's suing.

Lisa Calvente initially applied for tenure in 2018, according to The DePaulia, however, the committee rated her record “very good” rather than “excellent,” which fell short of qualifying her for a tenured position.

“It is no coincidence that a Black professor who holds important courses based on the power systems of white supremacy and the value of the Black identity has been given a hard time and has been denied tenure."

According to the student newspaper, only two of the 21 members of the College of Communication’s Personnel Committee recommended her for promotion. However, the University Board of Promotion and Tenure voted differently, narrowly recommending her promotion.

The decision was overturned by Alexandra Murphy, the interim dean of the College of Communication.

[RELATED: As unemployment crisis rears its head, professors nationwide demand they be exempt]

Calvente appealed the denial and was again rejected. In response, she mass-emailed students, detailing her tenure denial and various alleged racist incidents within the communications department.

She referred to faculty members’ concerns over her teaching styles, telling students that her colleagues “have resorted to grossly misrepresenting your evaluations of my classes and twisting your words so that they could make the case that my teaching, specifically on racism and marginalization, was ‘ineffective,’ ‘intimidating,’ and my classroom was ‘hostile.’”

Calvente wrote that she is “both saddened and frustrated” by this depiction of her teaching, which makes her resemble “Medusa.”

After discussing her specific tenure denial, Calvente addressed the “long-entrenched climate of discrimination and culture of fear, particularly against junior colleagues of color” within the communications department.

In June, Calvente filed a lawsuit in federal court alleging racial discrimination on the part of DePaul University.

She alleged that "racism within the College of Communication...culminated in the denial of Dr. Calvente’s application for tenure and promotion from assistant professor to associate professor." The lawsuit added that "by refusing to grant her applications for tenure and promotion, and through the soon to occur termination of her employment, DePaul deprived Dr. Calvente of the same rights and privileges enjoyed by her colleagues who never complained about racial discrimination, harassment, or marginalization."

However, the lawsuit suggested other possible reasons that DePaul could have denied her tenure.

"In her 2013 formal review, Lisa’s teaching was evaluated as good/very good, marking several developing strengths, while noting specific concerns about course organization and the reference to students feeling intimidated in the student representative report. Previous problems identified in teaching have grown more significant since the last review period, eliciting very strong concerns regarding Lisa’s approach to general student learning, her commitment to each DePaul student, and the classroom environment she fosters," the lawsuit stated.

"In terms of quantitative measures, Lisa’s evaluations have been consistently strong, routinely keeping in close range to the college’s very high numbers. Qualitatively, however, Lisa’s course evaluations indicate a range of recurrent and somewhat polarizing themes. Evaluations suggest that a strong number of students appreciate the rigor and demands of her courses, while other students experience the course climate to be intimidating and unwelcoming to diverse opinion and perspective," the suit added.

Calvente maintained, though, that the reason for her tenure denial amounted to racial discrimination.

[RELATED: Prof out for justice after 'public humiliation' for pro-Israel views]

“It is no coincidence that a Black professor who holds important courses based on the power systems of white supremacy and the value of the Black identity has been given a hard time and has been denied tenure,” said the petition’s author. “If you are tired of being erased in history or tired of Black people being thrown in the disposal for speaking our truths, take the first step by signing this petition and helping Professor Lisa Calvente, a true Black educator, gain her tenure back!”

Calvente and DePaul did not respond to Campus Reform in time for publication.