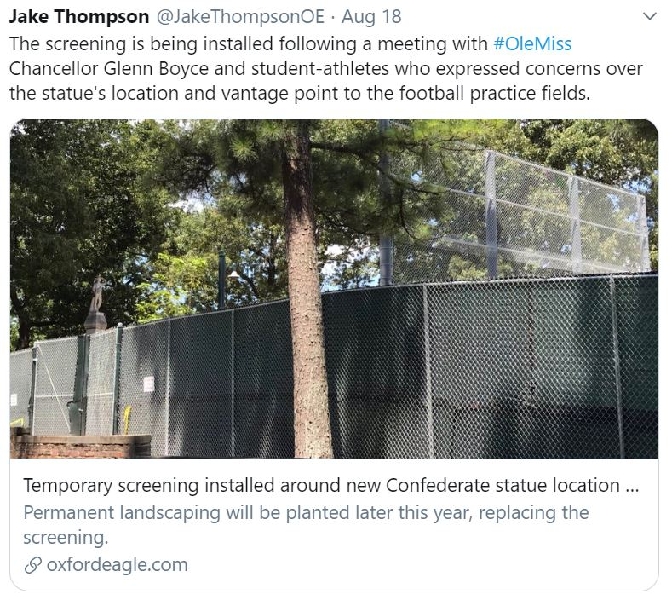 The University of Mississippi recently moved a Confederate statue from the center of its campus to a Civil War cemetery on the edge of the school’s property. But that wasn't enough for some students, who complained that the statue could still be seen from certain places on campus. After student complaints, the school erected a barrier around the monument.

An image taken by Jake Thompson of the Oxford Eagle shows the temporary fencing designed to obstruct the statue from view. Football players told the university that they did not want to see the statue, which is visible from the school’s football field, while they practiced, according to ESPN.

“the university is installing a temporary screen around the monument until permanent, limited landscaping can be planted later this fall, the optimal time of year for the plantings to take root."

The screening is being installed following a meeting with #OleMiss Chancellor Glenn Boyce and student-athletes who expressed concerns over the statue's location and vantage point to the football practice fields. https://t.co/u72aWUurp9

University spokesman Rob Guajardo provided Campus Reform with a press release originally sent to the Associated Press. The communication explains that Glenn Boyce, the university’s chancellor, met with students over the summer to address their concern over “the statue’s new location at the cemetery on campus in relation to the vantage point from the football practice field.”

In response to the students’ concerns, “the university is installing a temporary screen around the monument until permanent, limited landscaping can be planted later this fall, the optimal time of year for the plantings to take root.”

In the aftermath of George Floyd’s death, students circulated a petition to remove the Confederate statues on the Ole Miss campus: “Let's take this monument down and move forward together. Let's stop praising hatred and grow in unity. This is a necessary step to do so.”

On July 14, the university removed the statue from Lyceum Circle, a prominent location on campus, two weeks after Mississippi removed the Confederate “Stars and Bars” design from its state flag.

On June 14, the state college board approved a plan that would relocate the statue, according to ESPN.