The College Democrats at Western Michigan University are apologizing “for implying that Republicans were not welcome on campus” after blasting a professor for daring to allow a local Trump campaign field organizer to speak to his American Government class.

After WMU Professor Peter Wielhouwer published a Facebook post highlighting a recent guest lecture by a Michigan GOP Trump Victory campaign Field Organizer, the WMU College Democrats took to their own page to express deep displeasure with the individual’s presence on campus.

“It’s very disappointing to us that a WMU professor would allow someone who supports an administration that openly breaks the law daily,” read the complaint from WMU College Democrats, insisting that "this is much different than allowing local campaigns for either party to speak”. They went on even further to say, “we would hope this error in judgement doesn’t happen again.”

In a comment on the same post, the group insisted that “The time has passed for civility”, and that they “strongly condemn Donald Trump and anyone who supports his lawlessness.”

“We don’t believe that giving [President Trump’s] campaign a platform is representative of the values that WMU claims to hold,” said the group, adding “Donald Trump and his campaign staff are not welcome on our campus because of the threat they pose to our most vulnerable students.”

Afterward, the WMU College Republicans responded to the liberal group’s disdain for “civility” with an official statement on the matter, stating “We are disappointed that the WMU College Democrats have decided to condemn civility and bipartisan participation.” They went on, “hearing from people you disagree with politically is a reality of life, and WMU professors should not be bullied into only allowing the far left to have a platform.”

The WMU College Republicans concluded their statement by emphasizing their “commitment to civility and respectful engagement” and expressing “hope” that their “friends on the left can put aside partisan differences and do the same.” 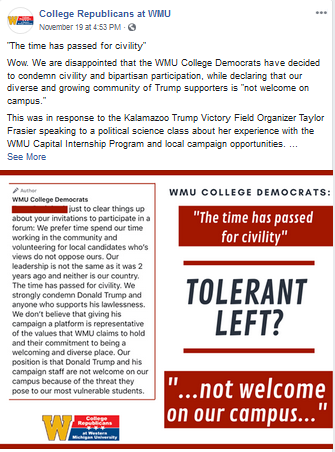 After the College Republicans’ calls for civility, WMU College Democrats walked back their original stance on the matter with an apology, rescinding their own statements on civility, claiming “the comments made about civility were meant to convey a no-tolerance policy toward white supremacy and extreme nationalism.”

Furthermore, the group stated, “[we] sincerely apologize for implying that Republicans were not welcome on campus.” The apology statement, signed by WMU College Democrats Communications Director Alayna Anderson, sought to “reassure the campus community that we are welcoming to differing views and encourage an open dialogue between political parties.”

“My goal is to promote civil conversation and engagement on our campus, and to provide opportunities for our students to hear about political careers and how political science can help them in their career goals,” Wielhouwer told Campus Reform, adding “Since I have students who are across the political spectrum, I host guests for as many of them as I can.”

The school did not respond to a request for comment in time for publication.