Columbia University is handling a request for a formal complaint after a professor told an outside student to “drop dead” in a heated Facebook exchange.

Lax accused the president of “murdering his own people” and claimed that his supporters “always strut around with neo-Nazi armbands.”

Columbia University is facing backlash after a professor told a student to “drop dead” in a heated Facebook exchange.

The student, Gabriel Montalvo, attends a different university but sent an email Tuesday to Columbia with screenshots of expletives the professor directed at him on the social media site.

Jeffrey Lax, deputy chair of Columbia’s political science department, sought out Montalvo in the comments section of a cartoon that criticized President Donald Trump’s handling of the coronavirus pandemic. He accused the president of “murdering his own people,” calling Montalvo a “neo-Nazi enabler” and a “neo-Nazi murderer lover" for defending Trump’s actions during the pandemic.

In another comment, the professor claimed that supporters of the president “always strut around with neo-Nazi armbands."

“How stupid or racist or evil do you have to be to defend POTUS at this point…" Lax added.

When Montalvo objected to his accusations, Lax told him to “drop dead.” 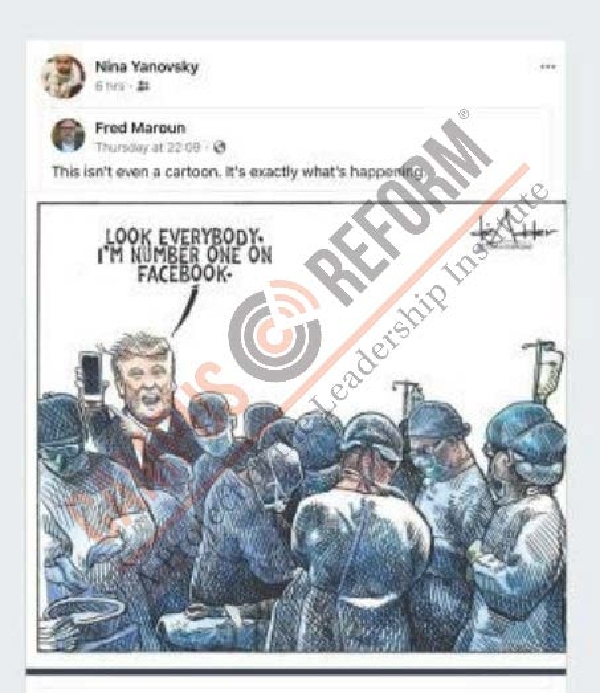 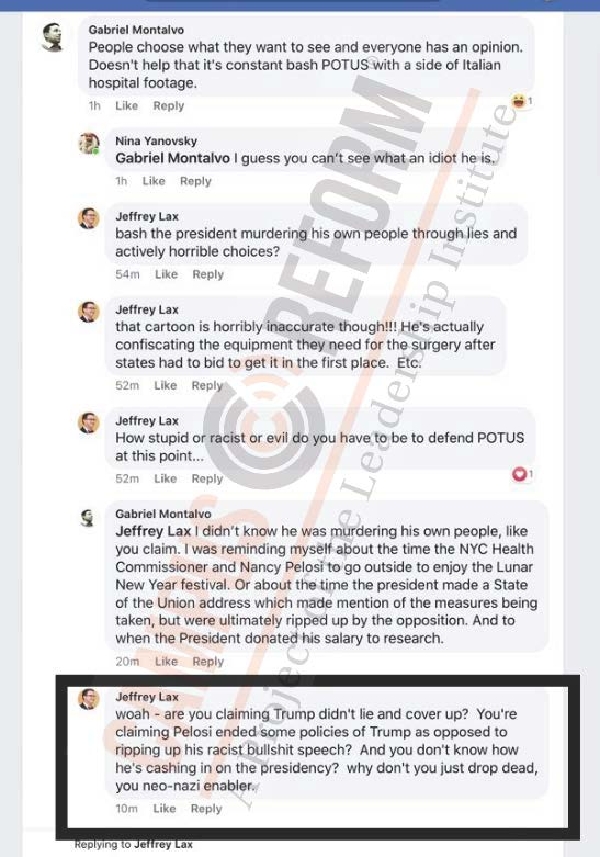 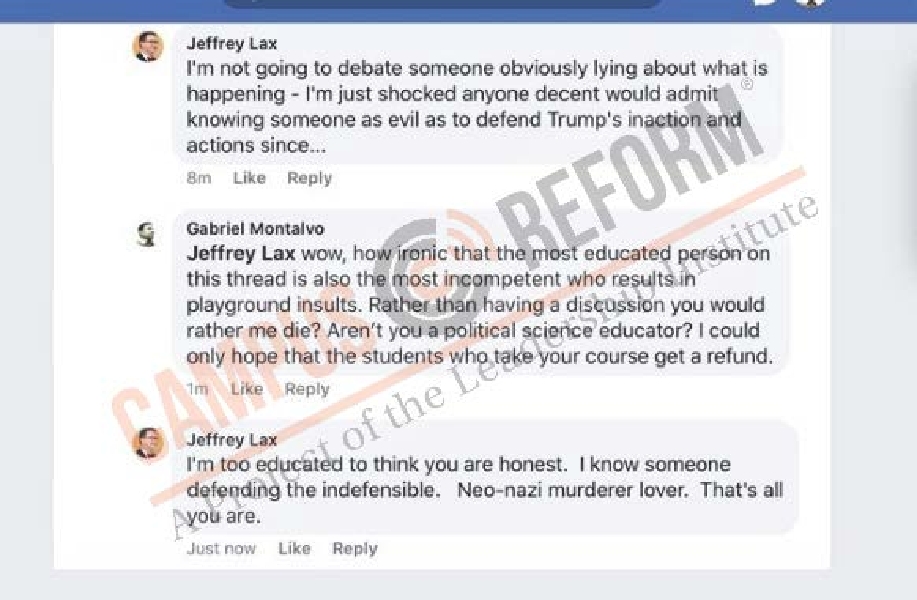 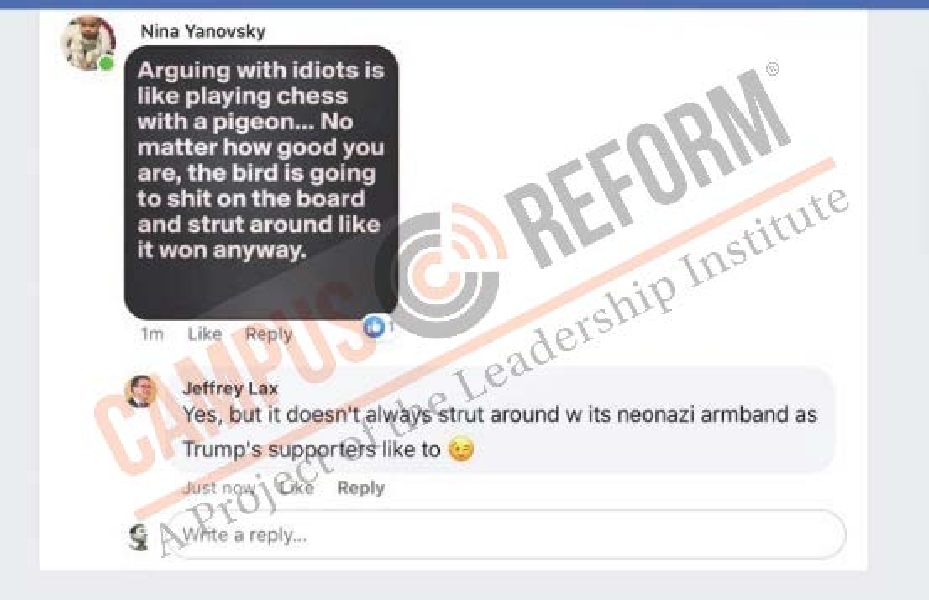 “Rather than having a discussion, you would rather let me die?” Montalvo wrote. He called it “ironic” that Lax is the “most educated person” on the Facebook thread, yet resorts to “playground insults.” But Lax responded that he is “too educated” to think that Montalvo is “honest” in his pro-Trump convictions, thus ending their debate.

In its Rules of University Conduct, Columbia affirms its support for the First Amendment, recognizing “only two kinds of limitations on the right of freedom of expression.” This includes speech that “constitutes a genuine threat of harassment, that unjustifiably invades an individual’s privacy, or that falsely defames a specific individual.”

Montalvo shared the professor’s remarks on Twitter when the exchange occurred in early April. He tagged Columbia University in his post, asking whether Lax violated the school's guidelines. Columbia never replied.

Montalvo told Campus Reform that he wasn’t able to file a formal complaint to the university until over a month later, citing “the various difficulties that the pandemic has placed” on him.

“Now that at least my school semester is coming to a close, I have more time in my schedule,” he said.

Columbia also rules that faculty members must “show appropriate respect in an instructional setting for the rights of others to hold opinions differing from their own.” Montalvo doubts that Lax upholds this responsibility while teaching.

“I can only hope the #1A is upheld in the classroom,” he tweeted, in his thread regarding the incident.

“Professors and higher education establishments should be examples of the exchange of civil discussion, not cyber harassment & perverting a historic tragedy to push an agenda,” he wrote.

Montalvo added that he served in the U.S. Army and that Lax had “the gall” to call him a Nazi.

[REALTED: UT-Austin instructor: Trump 'is a Nazi' and 'you are too if you still support him']

“What I find most ironic is how these are the same people that cry out ‘hate speech’ and yet, they are the ones that spew the most hatred,” he told Campus Reform.

Brandon Straka, founder of the #WalkAway campaign publicly came to Montalvo's defense. He shared his Twitter thread, reiterating Montalvo's request for Columbia to take action for Lax’s statements. Straka noted that Montalvo is Hispanic, in his opposition to Lax calling him a Nazi.

A @Columbia U PROFESSOR tells a hispanic Trump supporter to “go die” and calls Trump supporters “neo-Nazi murderer lover”s and “Nazi enablers”. This guy is educating America’s youth- in POLI SCI no less. Any response, Columbia U?? @realDonaldTrump @JackPosobiec https://t.co/MbmmEgubXa

“This guy is educating America’s youth- in POLI SCI no less,” he tweeted. “Any response, Columbia U??”

Straka told Campus Reform that Columbia should discipline Lax for his comments, claiming that if the professor posted derogatory comments about a race, ethnicity, or gender, he would have been immediately fired.

“Political views are not a protected class,” Straka said,  “so the system is slanted.” Straka added that many leftist professors “think it’s open season” to target conservative students online, and that it reflects their behavior in the classroom.

“Professor Lax forces us to question the very integrity of the university’s highly-esteemed Political Science department and fear for grading repercussions against us,” stated the chapter’s PR director, Cameron Adkins.

“Intolerance and childish outbursts are not what we expect from professors at an expensive Ivy League Institution.”

“It’s very clear that the comments of Jeffrey Lax show clear bias and leaves little doubt that he views those who support the president as anything but evil and ‘nazis,” he continued.

Campus Reform previously covered Lax, when he and other professors publicly expressed concern that students might share their virtual lectures with “right-wing sites,” during the coronavirus lockdown. He tweeted that he “has been thinking about” how students could potentially record his classes.

Montalvo told Campus Reform that he wants to bring awareness to “this type of behavior against freedom of thought, especially against conservatives.” He says that Columbia has not yet responded to his request for a formal complaint against Lax.

Campus Reform reached out to both Lax and the university for comment, multiple times. Neither party responded in time for publication.

Justine Brooke Murray is a booker and weekly contributor at One America News Network. She used to be a New York Campus Correspondent. Justine graduated the Maxwell School at Syracuse University, with a major in Political Science. She has previously served at the White House as an intern for former Vice President Mike Pence. Justine has appeared as a guest on numerous new shows, including FOX News Digital, OANN, the Joe Pags Show and the...