The conservative duo alleged a double standard by the university after it neglected to penalize their opponents over comments she made, cited in a complaint.

Arizona State student government candidates were punished for criticizing their opponent for her self-described Marxist and Communist views.

In the midst of coronavirus pandemic, an election complaint to the Arizona State University Associated Students Student Government was filed against two candidates in response to a statement one of them made during an Instagram live video between the two conservative candidates.

The statement in question was posted on Instagram and made by Campus Reform correspondent Cameron Decker, who told Campus Reform he said the following of his opponent: “It speaks to the credibility of a candidate when they support Stalin and their communist regimes. Especially when they are spouting that they want to purge non-leftist students, there’s not a place in USG for individuals who won’t welcome a free market of ideas."

Decker’s opponent in the student government race, Alexia Isais, whose Twitter profile bio states that she is a "Marxist-Leninist," alleged that Decker’s comments violated article 21 of the student code of conduct, which prohibits “engaging in discriminatory activities, including harassment and retaliation, as prohibited by applicable law or university policy.”

“They chose to use their platform in spreading pure lies and hatred against our campaign’s candidates, calling us ‘anti-Semitic’, establishing that we ‘are not exactly qualified for office,’” she added. “These candidates state that our candidates have 'expressed support for Joseph Stalin,' this is unrelated to the campaign and again is a smear against the personal political views of some candidates on the ticket.”

Isias then brought race and sexual orientation into the equation, insisting, “It is extremely discriminatory for two white, cis, heterosexual, right-wing men to decide whether a coalition that includes black and brown people, LGBTQ+ people, women, and progressive people is qualified for office.”

“Subjecting me to the same discriminatory smears through baseless assumption reveals the very nature of oppression that LGBT people face on a daily basis,” Decker continued. “This assertion places me as an excluded member of the community I relate with and come to for comfort. Moreover, being gay and being open about it has placed me in the very shoes of the people who are victims of systemic oppression. In a time when I thought I had acceptance, the claim rooted in false accusations has subjected me once again to exclusion from a community I so admire and belong to."

"The elections department has determined that the plaintiff has sustained injury from the comments made on Instagram by defendants, Cameron Decker and Joseph Pitts. Given that the alleged discriminatory comments were in reference to the United Voices for ASU senate candidate coalition, the defendants will be given one (1) level one (1) three (3) point infraction despite the multiple plaintiffs on the United Voices for ASU coalition that sent in identical complaints.

But when Decker made a similar complaint against Isias just weeks before, he was told by Andalis that the Article 21 complaint was “outside my jurisdiction as the Assistant Election Commissioner.”

Decker’s complaint was also in reference to violations of Article 21, citing a tweet by Isias saying: “Going to purge all the non-leftist friends I’ve made in poli sci classes/ This girl just argues [sic] with me about how colonization never happened. White liberalism is toxic."Another tweet from Isias cited in Decker's complaint involved her telling her followers "ur gonna get decked" for wearing something she didn't like. Yet another one of Isias' tweets read, "stop objectifying the 'okay boomer' girl or else," followed by a knife emoji.

Andalis, the Assistant Elections Commissioner who charged the two conservative students, stated in emails obtained by Campus Reform that “I have received this complaint. This is outside my jurisdiction as the Assistant Election Commissioner and has been forwarded to Assistant Director Rosenkratz. This will be sent to the Student Rights and Responsibilities as there is a possible violation of the ASU Student Code of Conduct. Interpreting the Code of Conduct is outside of my authority and therefore I will not be able to render the decision on this case."

[Related: POLL: Millennials would prefer to live in a socialist country]

However, another email obtained by Campus Reform shows that the ASU election commission determined that Isias' tweets referenced in Decker's complaint did not constitute a violation because they are "free speech." Just a few weeks before, Isias and her running mates were issued infractions for tweets the university described as "threatening" to ASU President Michael Crow and "several student organizations."

Screenshots obtained by Campus Reform show that Isias has previously shared another person's tweet that read, "Israel has no fucking right to exist." In another tweet, she acknowledged that Twitter locked her account after she tweeted "Fuck you @DougDucey literally you deserve to eat shit and die." Twitter cited its rules against "abuse and harassment" as justification for locking the account. 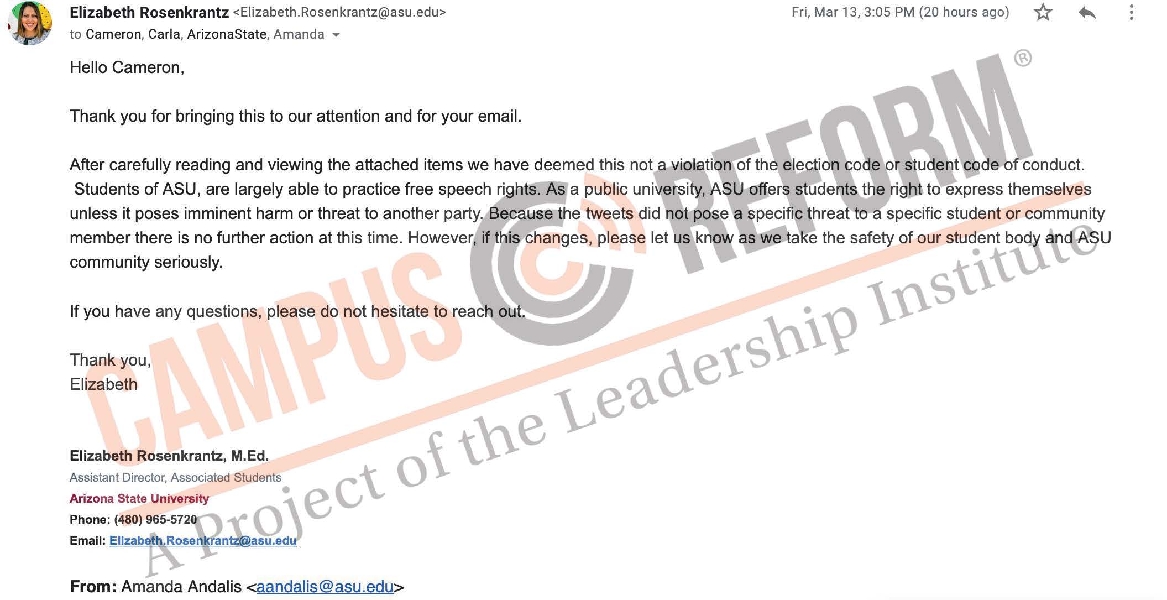 Months later, as the storm of the coronavirus continues to blow over, Pitts said the dust of the election controversy has relatively settled.

“The actions taken by the Elections Department were a muddle of refusing to establish (or adhere to) precedent, incompetence, and inconsistency in rule-making and enforcement. With every new case, free speech was redefined, and with every new instance, a new precedent was set. I was disappointed in their inability to follow a set of concrete rules, let alone their own!” Pitts told Campus Reform.

“When I asked for clarification regarding their free speech policy after several incongruous rulings, I was met 5 days after the fact — one day before Election Day — with a one-sentence response: ‘just don’t run a negative campaign,’” said Pitts. “If it was this simple, I had been fooled! But of course, it wasn’t. And in their attempt to subtly slander our campaign, they ended up once again rewriting a code that seems not to be enforced by the Commission at all.”

Decker told Campus Reform that he inquired about why he was disciplined for his Instagram live comments while Isias was not disciplined for her tweets cited in Decker's complaint. Decker said he never received a response from the school.