Profs across America use class time to #ScholarStrike for racial justice

Some professors are not teaching class in the name of racial justice and encouraging students to participate in alternative activities. 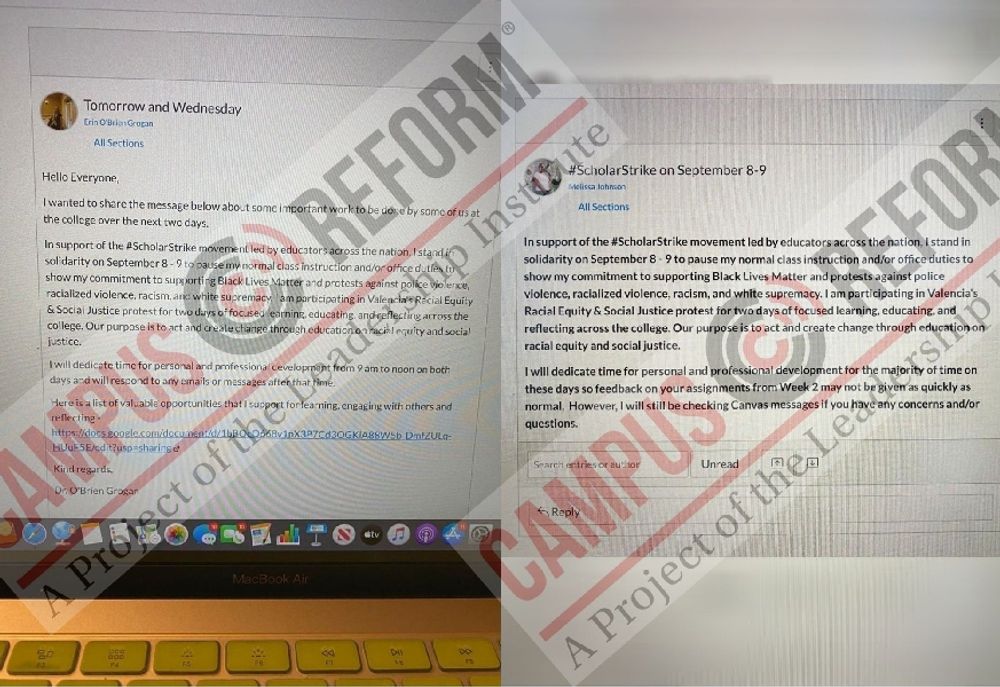 Professors and students around the country are participating in #ScholarStrike rather than attending class.

As previously reported by Campus Reform, University of Pennsylvania Associate Professor of Religious Studies and Africana Studies Anthea Butler played with the idea of a “Scholar Strike” for racial justice” on Sept. 8 and 9 after the WNBA and NBA held their own demonstrations to protest police brutality. Now, such a strike is happening, with professors and academics from many institutions across America participating.

Mount Holyoke Assistant Professor of Film and Media Studies Hannah Goodwin announced via email to her classes that she would be participating in the strike and hopes that her students will too.

"This week I will open up a forum where you can share anything you learned through your participation, and you may count this post as two of your required forum posts,” Goodwin announced, adding “it’s so important that we all take the time to learn from these offerings.” 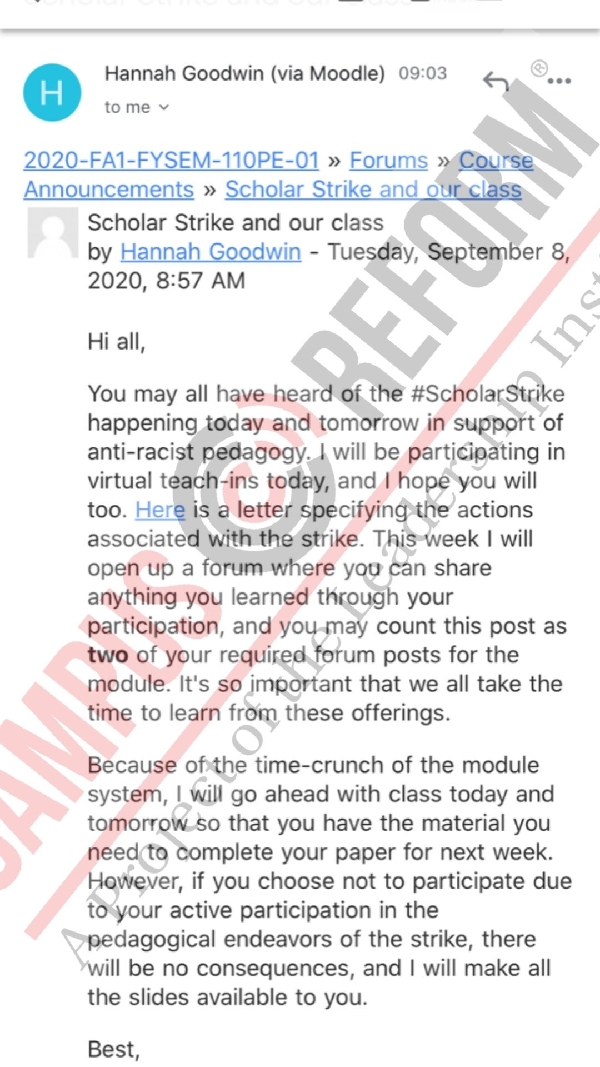 Luther College Visiting Assistant Professor of Religion James Hoke announced on Twitter that he watched a YouTube video during the strike about the ties of white supremacy and music theory.

“Since I teach at an institution that prides its music program, during #ScholarStrike, I watched this deep dive into music theory + white supremacy and, having had a little musical training, learned a lot,” Hoke wrote. “Hope our students watch + ask questions!”

Spelman College in Atlanta gave a series of lectures to commemorate the strike. Assistant Anthropology Professor Erica Lorraine Williams gave a presentation on her course, "Defunding the Police: Abolition and Black Feminisms," while Spelman President Mary S. Campbell spoke about racism in academia.

Barrett, the Honors College at Arizona State University announced on Facebook that it would also join the strike.

In a separate email to ASU students in HON 370: History of Ideas, the professor announced that class wouldn’t meet September 8 and 9.

“Please know that we care deeply about your well-being - and it's because we care about our students that we take this action, as carrying on as though things were normal suggests a complicity with a system of violence that we cannot condone,” the professor stated in his email. 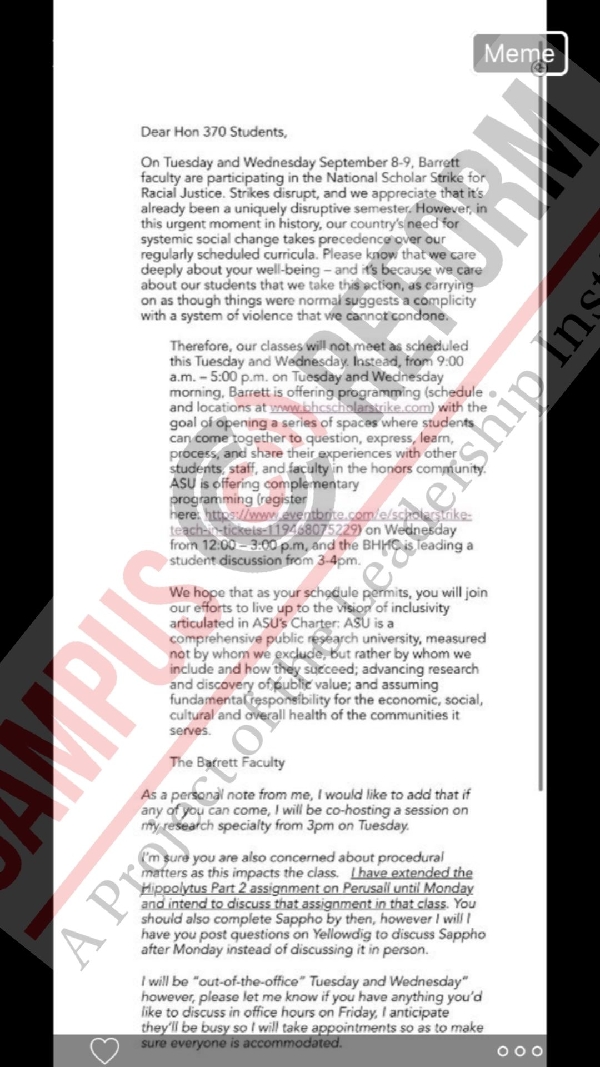 Emory University Assistant Professor Emily Gade announced to her class through Slack that she would be participating in #ScholarStrike and told her students about upcoming events.

"There are a lot of events that will be held on these days (see flyer below) and I will hold an extended office hours time...to talk about what is happening in the country at this moment or anything else you all would like to talk about related to racial justice, etc,” said Gade. 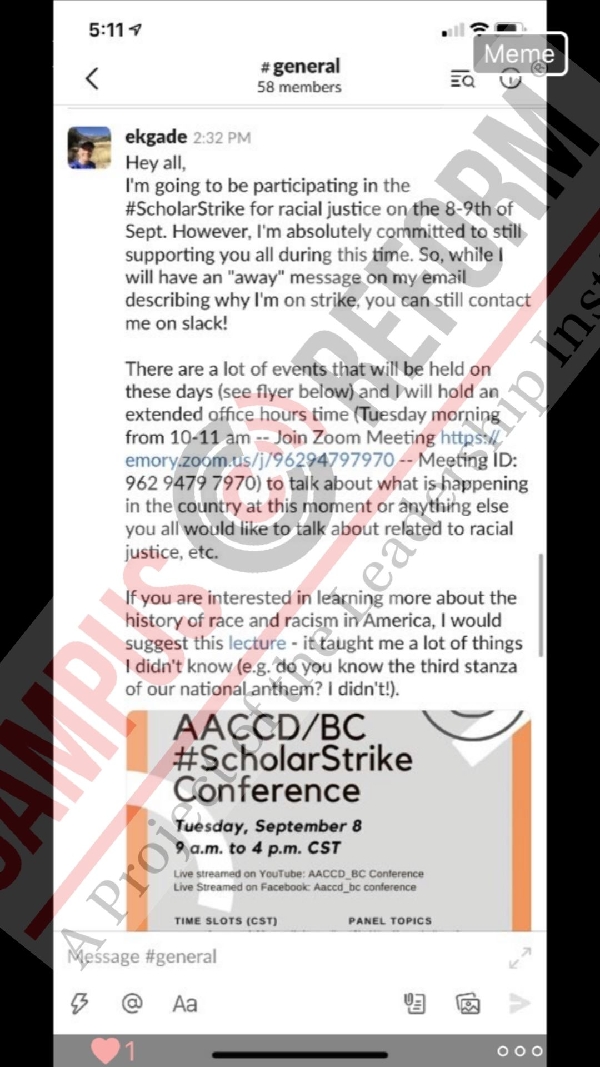 "In support of the #ScholarStrike movement led by educators across the nation, I stand in solidarity on September 8 - 9 to pause my normal class instruction and/or office duties to show my commitment to supporting Black Lives Matter and protests against police violence, racialized violence, racism, and white supremacy," wrote Johnson.

Valencia English professor Erin O'Brien Grogan also notified her students that she is "participating in Valencia's Racial Equity & Social Justice protest for two days of focused learning, educating, and reflecting across the college. Our purpose is to act and create change through education on racial equity and social justice." 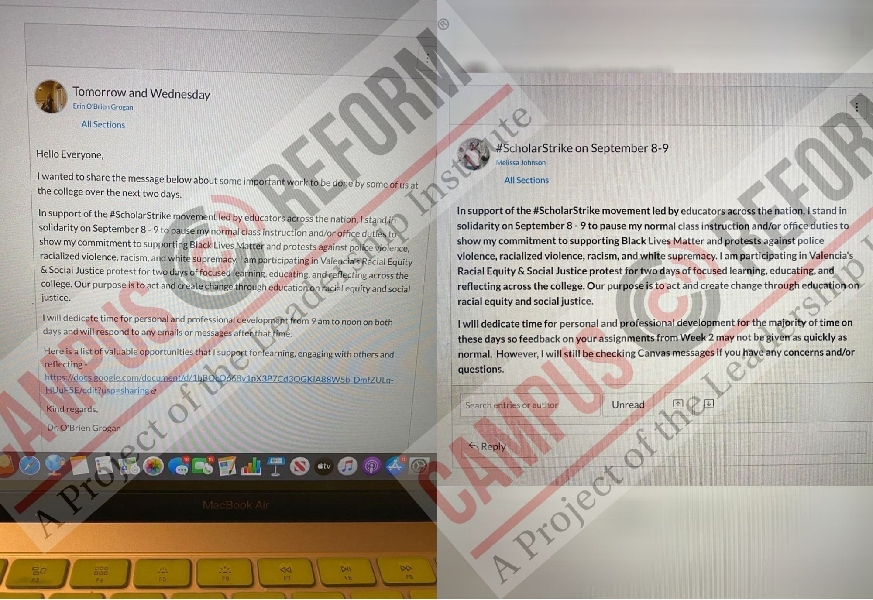 Grand Valley State University Associate Professor of Liberal Studies Joel Wendland-Liu announced on Twitter two “Readings for #ScholarStrike.” The tweet included photos of A Life in American History by W.E.B. Du Bois and Black Towns, Black Futures: The Ending Allure of a Black Place in American West by Karla Slocum in commemoration of the strike.

On Instagram, the St. Louis University Student Government Association encouraged faculty members to participate by “using class time to discuss racial inequities and BLM.” As for students, there’s a teach-in they can attend with lectures and activities “that will build awareness of issues related to racism and oppression.”