Instagram accounts for student organizations advertised a petition titled “Safety for LGBTQ+ and POC members” in attempt to ban the event.

After an anonymous post, students began a campaign to stop a Back-the-Blue rally.

Students tried to pressure the administration at Mount Holyoke College to ban a pro-Trump, Back the Blue demonstration across the street from the Massachussetts campus.

The rally was hosted by local correctional officers and Pioneer Valley Massachusetts for Trump 2020 on Sept. 7 at the Village Commons in South Hadley, Massachusetts, which is across the street from the college.

The rally came to students’ attention on September 2 through an anonymous post on the Instagram page "BIPOC at Mount Holyoke.".

“I know that most students aren’t on campus, but there’s a ‘Back the Blue’ (pro-police) and pro-Trump standout at the village commons in South Hadley this weekend,” it read. “It’s right across the street from campus. I’m only reaching out because I hope student pressure on admin can create a response from the college.” 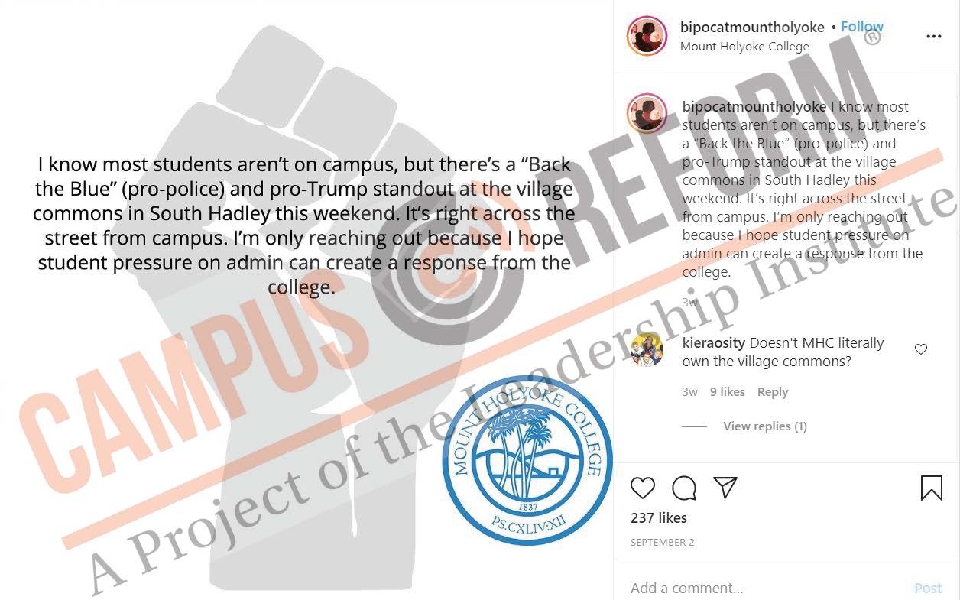 However, since the majority of students aren’t on campus due to the  coronavirus pandemic, multiple organizations created a "Petition against 'Back the Blue' Rally" titled “Safety for LGBTQ+ and POC members.”

The petition garnered more than 1,600 signatures.

“This is outrageous and we demand a response from the administration of Mount Holyoke,” the petition stated. “By maintaining silence about the upcoming events, the school is encouraging a gathering of people who could threaten our community’s safety.”

“Although Mount Holyoke is a space that encourages the opinions of all students to be shared, they should not tolerate the sharing of harmful rhetoric,” it continued. “The implication of the stance held by the ‘Back the Blue’ rally is in direct opposition to the Black Lives Matter movement and the safety of all POC groups and LGBTQ+ community.”

“This goes against the inclusive and progressive message of Mount Holyoke as an institution and a community,” it went on.

In a statement to Campus Reform, Sophia Erivbieta, a freshman at MHC, felt that the school wasn’t living up to its promises.

“The school promised to work on racism and inclusivity in the newsletter they sent recently but are going directly against that by allowing this rally to happen,” she said. “I feel like if the school cares about people of color and the LGBT+ community like they said they do, they would not allow a rally that could threaten the safety of those groups of people to happen.”

Meghan, another student at MHC who asked Campus Reform not to use her last name, wasn’t pleased to see the petition.

“If people want to gather in a safe manner for a cause that brings them together, who are Black at MHC to tell them they can’t?” she said. “Police have been targeted this year too, whether Black at MHC want to recognize it or not. The Black at MHC organization wouldn’t appreciate it if people wanted to shut down a campus BLM protest in the way they’re calling for now, so why is this petition justified?”

Mount Holyoke College Republicans President Sandra Scarlatoiu criticized the claim that the event would harm the safety of the campus community since barely anyone is at MHC.

“Cops place their lives on the line every day to help others,” she said. “No one is asking them to do it. And considering all the chaos and harmful rhetoric that has been spread around about the police, it’s important that we stand up for them.”

In a school-wide letter Sept. 5, MHC President Sonya Stephens admitted that the college had no power to stop the rally, citing the First Amendment as one of the main reasons.

“Participants will gather on the public area around the gazebo, which is not owned by the College,” Stephens wrote.

“The right to peaceful assembly, and indeed to free speech, are protected in the First Amendment, and together with the freedoms of association, petition and the press are what we understand more broadly as freedom of expression,” she continued. “To defend free speech is to defend the most fundamental and most important of human freedoms, even when, as the ACLU article makes explicit, some views expressed “are antithetical to the very freedom the First Amendment stands for,” otherwise “no one's liberty will be secure. In that sense, all First Amendment rights are ‘indivisible.’”

“The College cannot, then, prevent an assembly from being held on town property in proximity to the campus,” Stephens concluded.

“This response from the institution negates the Anti-Racism plan, which was released only days ago, because rather than taking the next step to ensure that the students who are staying on campus are safe, they simply say that nothing can be done about the rally,” the group said. 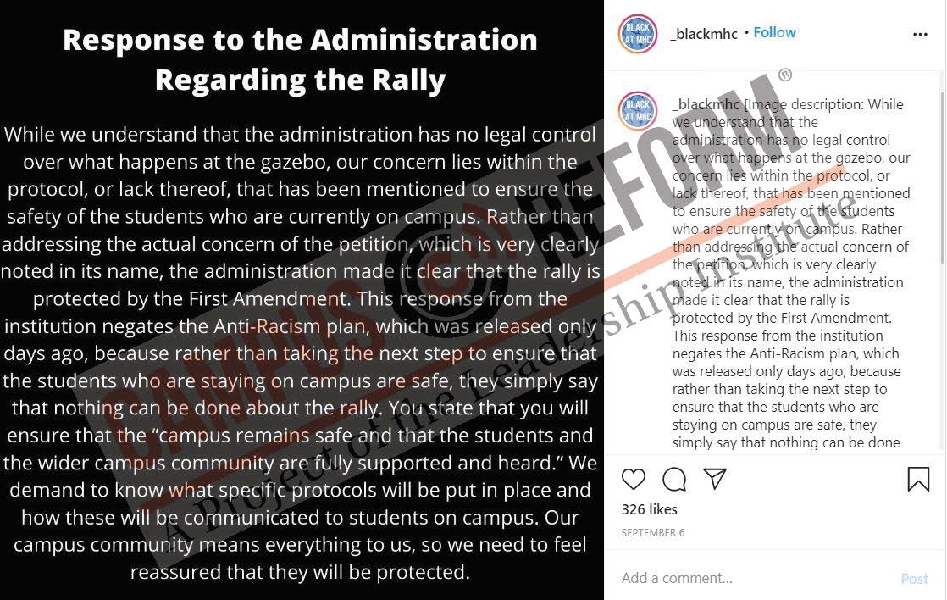 This isn’t the first clash with the police for Mount Holyoke students.

As previously reported by Campus Reform, former MHC Police Chief Daniel Hect was put on administrative leave after students discovered that he was a Trump supporter. In another instance, students planned to protest a Police Academy Graduation occurring on campus.

Campus Reform reached out to Mount Holyoke for comment but did not receive a response in time for publication.