Campus Reform also reached out to Washington University students to get their reaction.

The Black & Palestinian Liberation (BPL) group at Washington University in St. Louis recently argued on Instagram that, "Israel's domestic policy and its continued genocide of the Palestinian people is born from the same white supremacist power structures that produced the genocide of indigenous people in the Americas." 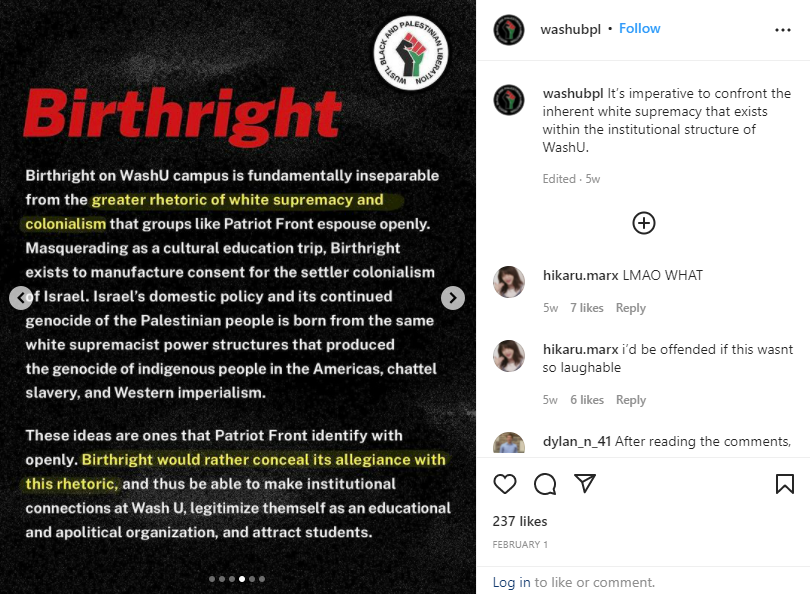 The post also accused Birthright, a “not-for-profit educational organization that sponsors free ten-day heritage trips to Israel," of using the "rhetoric of white supremacy and colonialism."

The Birthright trip is designed to help young Jewish adults strengthen their Jewish identity and connection with Israel.

Several commenters rebuked the statement on the group's Instagram post. Campus Reform also reached out to Washington University students to get their reaction.

“To imply that white supremacists stand with Israel is not only backwards, but perpetuates the notion that Jews cannot be victims of white supremacy," Sam Scherkenbach said.

“The comparison of Birthright, a program that aims to help Jewish students connect with their Jewish heritage and better understand the history of their people to a violent white supremacist organization that targets jews in its manifesto is appalling," said Allie Kaplan, a Middle Eastern studies student.

Kaplan continues “The whitewashing of Jews that is conducted by @washubpl in their post erases Jewish identity and history and is anti-Semitic.

In response to negative comments on Instagram, BPL replied, “we maintain that Israel is a white supremacist state. We stand firmly by our message.”

Campus Reform reached out to WashU BPL for comment but did not receive a response.