Young Democratic Socialists of America endorsed a pamphlet titled The Rank & File Strategy which provides instruction on 'fighting for a socialist future.'

The pamphlet recommends young socialists enter 'strategic' professions such as teaching or healthcare.

The strategy is intended to 'create the conditions in which socialist ideas can thrive.'

The pamphlet instructs socialists on specific actions to take in order to bring about “the conditions in which socialist ideas can thrive” as well as ways they can help repair the bridge between the socialist movement and workers’ movements.

The rank and file strategy is meant to successfully advance the labor movement with broader socialist aims including universal healthcare, the Green New Deal, and Black Lives Matter.

In summary of this goal the pamphlet claims the rank in file strategy “provides a strategic vision for re-linking workers’ movements and the left” which will require reconnecting socialists and the “majority of the working class.” 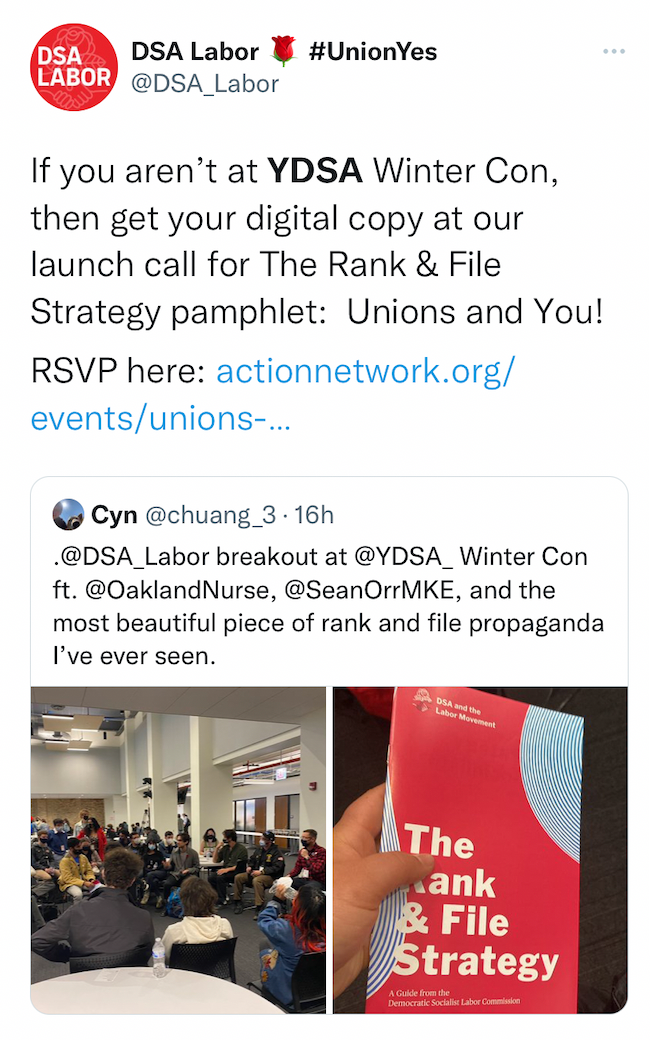 The pamphlet describes workplaces as the sites for “active struggle” against the capitalist class. The rank and file strategy calls for the creation of “a layer of militant workplace leaders.” It goes on to encourage YDSA members to enter professions in “strategic workplaces.”

DSLC has defined six target professions based on criteria including economic, social, and political leverage. The six targets are nursing, teaching, UPS, transit, building trades, and city government. DSLC adds “Teaching is also attractive because of its recent outburst of militancy.”

The importance of unions in achieving socialism is stressed in the pamphlet. Instruction is provided on utilizing chapter unions which operate at the local level to foment support for “campaigns for candidates, Medicare for All, and a Green New Deal.”

Similar tactics can be used to push for other socialist agenda including “personal protective equipment, the PRO Act, or Black Lives Matter.”

A section of the pamphlet headed “Don’t Let a Crisis Go to Waste” details how union members expanded their network through strikes held during the Covid-19 pandemic.

be integrated into our union work” and they support this with an example of educators who organized a coalition called Educators for Bernie.

The coalition later adopted the name Educators for Black Lives which drew more people to protest and mobilize with the DSLC.

Campus Reform reached out to YDSA and DSA Labor Steering Committee for comment. This article will be updated accordingly.